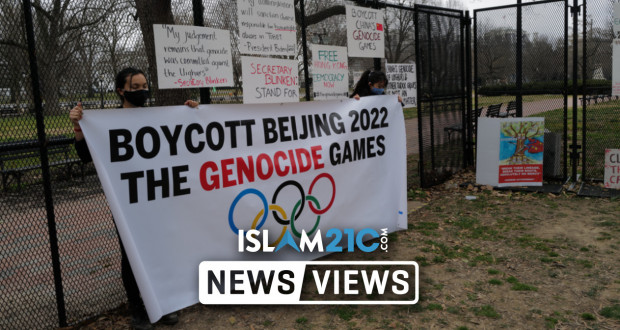 US House Speaker calls for diplomatic boycott of Beijing Olympics

In one of the most significant interventions by a political leader on the upcoming Beijing 2022 Winter Olympics, the US House Speaker Nancy Pelosi has called on America and other countries to boycott the event due to China’s ongoing genocidal acts against the Uyghur Muslims in East Turkestan (referred to as Xinjiang by the Chinese government). [1]

In remarks shared during a congressional hearing on the topic of the Beijing Olympics, Speaker Pelosi said:

“What I propose – and join those who are proposing – is a diplomatic boycott … Let’s not honor the Chinese government by having heads of state go to China.” [1]

“For heads of state to go to China in light of a genocide that is ongoing – while you’re sitting there in your seat – really begs the question, what moral authority do you have to speak again about human rights any place in the world?” [1]

China has continued to act with near impunity against the Uyghurs. The government is currently holding millions of Uyghurs in concentration camps where women are sexually assaulted on a regular basis, whilst men are tortured and forced to work hard labour in fields and factories. Despite widespread condemnation from the legislatures of countries such as the US, Canada, Australia, the Netherlands, and most recently the UK, the Chinese Communist Party insists that the ongoing genocide is a mere fabrication. [2] [3] [4] [5]

To this end, shortly after Pelosi’s statement to the congressional committee, Chinese Foreign Ministry representative Zhao Lijian lashed out, suggesting, “Some US individuals’ remarks are full of lies and disinformation.” Zhao went further by demanding that “US politicians should stop using the Olympic movement to play despicable political games” or making use of the “so-called human rights issue as a pretext to smear and slander China.” [6]

Attempting to engage in whataboutery and wagging the finger at America’s own shortcomings regarding race and human rights issues, Zhao made note of “the continuing spread of xenophobia, white supremacy and discrimination against people of African and Asian descent and Islamophobia”. [6]

In addition to Pelosi’s remarks, a coalition of human rights groups—including representatives for Hong Kongers, Uyghurs, Tibetans, and others—issued a joint statement on Monday calling for the complete boycott of the Olympics.

“Participating in the Beijing Olympic Games at this time would be tantamount to endorsing China’s genocide against the Uyghur people, and legitimising the increasingly repressive policies of the totalitarian Chinese regime.” [7]

“In spite of Beijing’s failure to keep human rights promises made before the 2008 Summer Olympic Games, and despite repeated requests by affected peoples and human rights groups to move or delay the 2022 Beijing Games, the International Olympic Committee (IOC) has decided to put profit before human lives and turn a blind eye to genocide.” [7]

The public disinformation campaign and consistent denials by the Chinese government that they are engaging in any wrongdoing in the East Turkestan region is undoubtedly having some impact, but more people are learning of the true horrors being perpetrated by the Chinese government. It is only a matter of time before China finds itself totally isolated on the issue.

Until now, the main difficulty for countries has been the fact that the political and economic power wielded by China as the world’s second-largest economy could result in significant fallout from taking too aggressive a step towards punishing agents of terror.

In March, a number of European countries jointly issued sanctions against key Chinese government officials believed to be the masterminds behind grave human rights violations against the Uyghurs. These men include Wang Zunzheng, the party secretary of the Xinjiang Production and Construction Corps, which has been likened to a modern-day East India Company. Chen Mingguo, director of the police force responsible for Xinjiang, was also sanctioned, as was Wang Mingshan, who “holds a key political position in charge of overseeing” the detention of Uyghurs. Lastly, Zhu Hailun, a former deputy Communist Party chief, was also sanctioned as he is accused of holding a critical position in overseeing the running of the detention camps. [8]

However, more substantive action needs to be taken, as freezing the overseas assets of the above individuals is likely to achieve little. Companies such as clothing manufacturer Nike retain strong ties with factories in Xinjiang. These companies have been reluctant to source alternative suppliers, even going so far as to lobby the US government against a bill designed to prevent American companies making use of forced labour. It is evident that until major corporations recognise the gravity of the horrendous events taking place in East Turkestan, governments will likely also be unwilling to move on the issue. In turn, common citizens will not be as keen on better understanding the humanitarian crisis, let alone changing their buying habits. [9] [10]