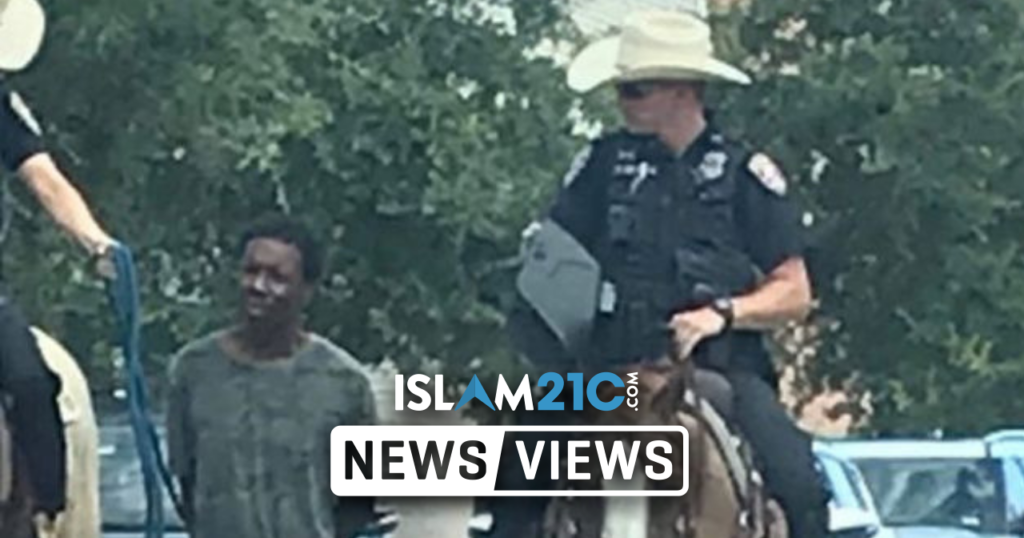 A police department in Galveston, Texas have issued an apology after photographs emerged showing two white officers on horseback leading a handcuffed black man by a rope, which provoked a public outcry on social media.

The photos show Donald Neely, 43, who was arrested for allegedly trespassing, being escorted on foot by two mounted officers, named only as P. Borsch and A. Smith, with one of the officers holding what appears to be a rope fixed to his handcuffs.[1]

We have verified with law enforcement officials in Galveston, that the photograph taken in Galveston is real. It is hard to understand why these officers felt this young man required a leash, as he was handcuffed and walking between two mounted officers. pic.twitter.com/bEFZnn4qmH

People on social media were quick to point out the symbolic nature of the photos, saying that they evoked historical memories of the slavery era in the United States and the accompanying racism and violence by whites against blacks during that time period.

Melissa Morris, the Neely family attorney, voiced her disapproval: “This is the behavior in 2019 that we have to deal with. Unfortunately, these police officers lacked the judgment, and the fitness to decide that this imagery that comes from the way that they handled Mr. Neely is painful, and that it just dredges up all of these painful memories of the past”. [2]

Following the widespread criticism and condemnation, Galveston police chief, Vernon Hale, apologised in a statement for the “unnecessary embarrassment” caused to Neely. Whilst he believes that the officers did not have any “malicious intent”, he admits that they “showed poor judgment in this instance” especially as they could have “waited for a transport unit at the location of the arrest”. [3]

Hale further stated that: “We have immediately changed the policy to prevent the use of this technique and will review all mounted training and procedures for more appropriate methods”. [4]

However, others expressed that Hale’s response was insufficient and not enough, with some going as far as arguing for the officers to be fired.

Professor Clayborne Carson of Stanford University told Al Jazeera that the incident was not merely “a matter of training” the police officers. He said:

“Anyone who has the slightest awareness of American history would understand the implication of seeing a black man paraded in that manner. It resonates with the worst aspects of racism, going back to slavery”. [5]