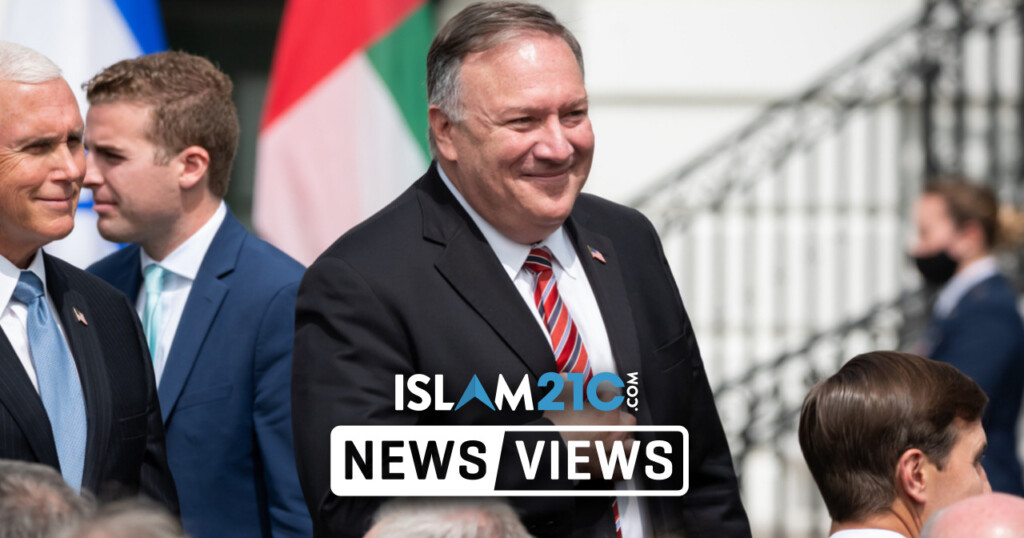 US Secretary of State Mike Pompeo has urged Saudi Arabia to consider normalising relations with ‘Israel’, joining Bahrain and the UAE who both signed the ‘peace agreement’ – referred to as the ‘Abraham Accords’ – at the White House.[1]

Palestinians have repeatedly condemned the normalisation deals as another “stab in the back” by an Arab state.[2] The latest development comes after Trump said last month that he expected Saudi Arabia to recognise Israel “at the right time”.

Pompeo met with the Saudi foreign minister, Prince Faisal bin Farhan, in Washington, DC. Pompeo made mention of the so-called ‘Abraham Accords’, a supposed US-brokered agreement to normalise diplomatic ties with ‘Israel’ and offer a strategic boost to the state.

Pompeo said that the agreement “contributed greatly to our shared goals for regional peace and security”.

“They reflect a changing dynamic in the region, in which countries rightly recognize the need for regional cooperation to counter Iranian influence and generate prosperity.”

“We hope Saudi Arabia will consider normalizing its relationships as well, and we want to thank them for the assistance they’ve had in the success of the Abraham Accords so far.”[3]

Pompeo hopes that the addition of Saudi Arabia in the normalisation of relations will encourage Palestinian leaders to return to peace negotiations with ‘Israel’.

US President Donald Trump has played a crucial role in ensuring that the UAE and Bahrain undergo the normalisation process in exchange for political and military security.[4]

The US is currently trying to persuade more Gulf countries to make similar accords with ‘Israel’ under Trump’s leadership, highlighting that Arab normalisation with Israel is considered a ‘significant achievement’.

Additionally, the normalisation deals would continue to bolster the strategic realignment of Middle Eastern countries against regional rival Iran, as Trump continues his presidential campaign against Joe Biden for another term in office that will be determined in national elections next month.

In 2002, Saudi Arabia drew up an initiative under which Arab nations offered to normalise ties with Israel in return for a statehood deal with the Palestinians and full Israeli withdrawal from territory captured in 1967.

Adnan Abu Amer, head of the Political Science Department at the University of the Ummah in Gaza, wrote:

“It seems Israel is increasingly gaining political ground in the region, expanding trade and financial relations, and solidifying an Arab-Israeli axis against Iran. All of this is happening against the will of the Palestinian people and without any concession from the Israelis.”