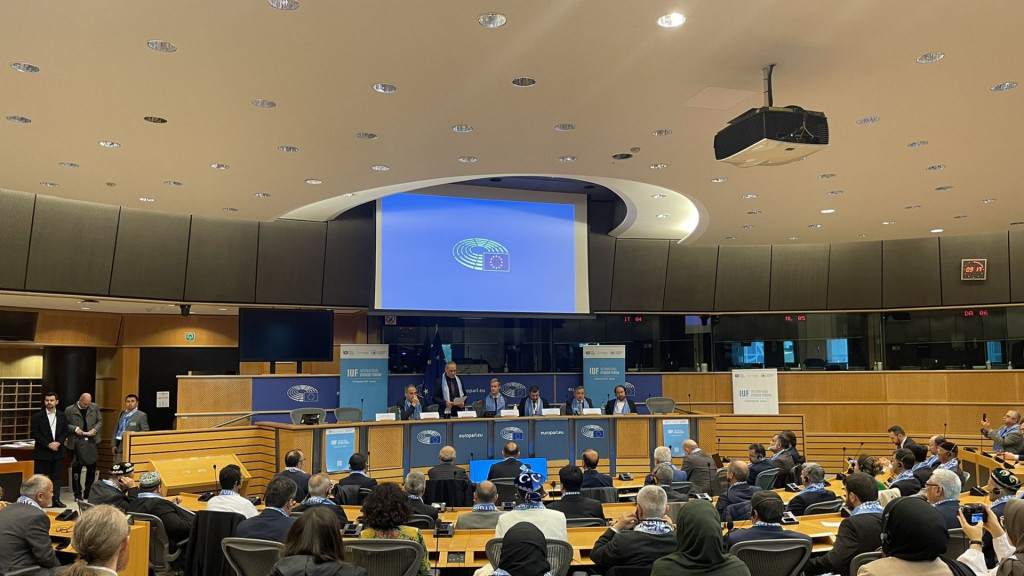 Courtesy of the World Uyghur Congress

Following last week’s successful International Uyghur Forum held in Brussels, a declaration signed by the Presidents of the World Uyghur Congress (WUC) and the International Union of the East Turkistan Organizations (IUETO), as well as the Chairman of Hasene International, has been released to reiterate the matters that were discussed. In addition, the statement also lays out thirteen urgent steps that various national and international entities should take in order to end the genocide of the East Turkestani peoples. [1]

The declaration begins as follows:

“We express our gratitude to the esteemed speakers and all of our guests at the Forum, who have made practical and productive contributions to our programme and drew attention to China’s brutal human rights violations, which have continued since the beginning of its occupation of East Turkistan, and which today constitute crimes against humanity and genocide, and by pointing out the urgent steps that must be taken in the political, legal and social fields.” [1]

Taking place on Wednesday and Thursday, and mere days before the commemoration of the East Turkestan Independence Day on Saturday, proceedings began at Espace Léopold – the prestigious meeting location of the European parliament – before switching over to the Crowne Plaza Brussels Hotel. [2]

In attendance were senior academics such as Dr. Adrian Zenz, lawmakers including the British shadow Justice Secretary Afzal Khan, international activists, media organisations including Islam21c, as well as Nicholas Vetch and other members of the 2021 Uyghur Tribunal.

In addition, MEPs Miriam Lexmann, Ismail Ertug, David Lega, and Raphael Glucksmann all gave contributory remarks. Thereafter, a panel discussion on the “Responsibilities of International Community and European Union towards the Genocide in East Turkistan’’ took place. A number of further panel discussions and events were held over the remainder of the forum, with the WUC convening on November 11 to discuss its next steps. [3]

The WUC, Hasene International, and IUETO further note in the declaration that issues including the following were discussed at the forum:

Thank you @Afzal4Gorton for your constant support for #HumanRights, especially for #Uyghurs, #HongKong & everyone suffering under #China’s #CCP pic.twitter.com/KkwAoB4sIM

In detailing a number of urgent points of “immediate action”, the cosignatories call on the steps recommended by the UNHCR to be implemented. Moreover, they ask that countries with existing bilateral relationships with China use “all political and diplomatic means in accordance with the principles outlined in the Universal Declaration of Human Rights” to end the Uyghur genocide. [1]

Muslim nations have often been criticised for their inaction in the face of China’s genocidal policies in East Turkestan. Perhaps this is partially due to China’s ever-rising status as a superpower and its enormous influence on not only Asian affairs, but also the Middle East and the rest of the world.

Whatever the reason, in directly addressing the Organization of Islamic Cooperation (OIC), the declaration boldly states,

“The OIC and all its member states should recognise the genocide in East Turkistan, take action to stop it, and allow the representatives of East Turkistan to join the Organization of Islamic Cooperation in observer status.” [1]

The Islamic Republics of East Turkestan:

Some of our past coverage on Uyghur issues: