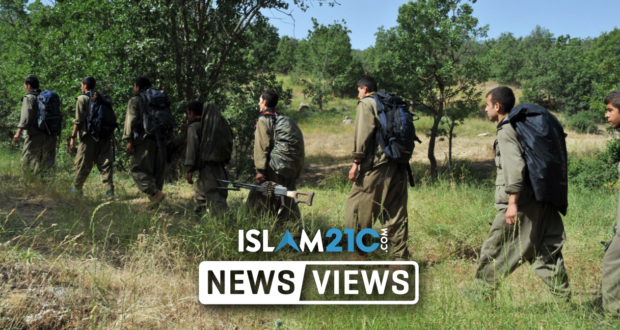 Shocking footage has emerged allegedly showing YPG militants torturing an Arab family, including a woman, in the northern PKK-occupied city of Manbij in Syria. [1]

The alleged YPG fighter can be seen torturing the family at a checkpoint. He repeatedly beats the family, kicking them and removing the woman’s ḥijāb. He then urinates on the victims and continues to beat them as they scream in agony.

The YPG and its affiliates have been accused, in the past, of killing its opponents, ethnic cleansing, and taking part in several atrocities. [2] Human rights organisation, Amnesty International, accused the militants of committing war crimes against civilians in Syria. It claimed that militants had destroyed homes, villages, and forced people to flee their land. [3]

Militants of the PKK Syrian affiliate, the YPG have in the past attacked NATO Turkish soldiers on several occasions and, until today, continue to do so. [4]

As well as being responsible for the deaths of numerous civilians,  the militants have also attacked places of worship, killed worshipers and “destroyed hundreds of mosques”. [5]

“It’s disgusting when people start to look away or whitewash heinous crimes because their favourite armed group in Syria did it. Many terrorists film their own crimes, not only in Syria. They are feeling save, it’s some kind of trophy and an additional mockery of the victims.” [7]

Arnoud Van Doorn from The Hague City Council for the PvdE said in response to the video that:

Many British men in recent years have travelled to Syria to join militias such as the YPG. [9] Some have voiced concerns that those returning to the UK having fought alongside the YPG and PKK could pose a threat to the UK by importing some of the criminality shared by the PKK. This concern is not in vain, as PKK supporters — let alone militants — are known to have carried out violent activities against civilians, such as kidnapping tourists, [10] and carrying out suicide bombings to make political demands. [11]

Many have also raised questions surrounding the disparity in treatment from the authorities and how they are dealing with people returning from Syria. Some have insisted that the British authorities have treated different ‘returning fighters’ differently and that there is an alleged clear ‘double standards’ in their handling.

May Allāh (subḥānahu wa taʿālā) protect our brothers and sisters. May he grant all those who were killed unjustly, Jannat al-Firdaws and bring about much greater good for their people in this world and the next. Āmīn.