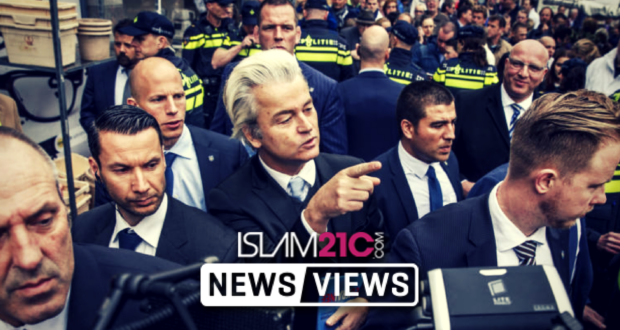 Far right activists staged a violent and bloody protest on Saturday in the heart of London calling for the release of Tommy Robinson who had been jailed for contempt of court and breaching a previous sentence.[1]

Outnumbering the police, the violent mob attacked and injured police officers, caused criminal damage to property and initiated sufficient alarm to the security of the Royal Family for a security barrier of police officers to be erected blocking the entrance to Buckingham Palace. Inciting the baying crowds was notorious far right Dutch politician Geert Wilders.[2]

Geert Wilders, who is known for his outrageous views on Islām, had been banned from entering the UK in 2009, by the then Labour Government. However, the current Conservative Government decided to grant this deeply divisive figure entrance to the United Kingdom, despite his most vile views and being tried for incitement to hatred in 2011.

Wilders, who has said Islām is a religion of a “retarded culture”, [3] likened the Qur’ān to Hitler’s Mein Kampf, produced “Fitna” an inflammatory film which caused revulsion and outrage across the Muslim world and participated in the provocative “Draw Prophet Muhammad” contest in Texas. More recently Wilders in reference to the fascist Austrian Government’s decision to shut down certain mosques, tweeted: “Great! If I would be Prime Minister of The Netherlands I would close down all 475 mosques in our country.”[4]

Great! If I would be Prime Minister of The Netherlands I would close down all 475 mosques in our country.

Under a considerable police escort, Wilders, strode onto the stage and roused the flammable crowd as he called out for Sadiq Khan to listen to him. Quite what the first Muslim Mayor of London has to do with the arrest of Tommy Robinson was not made clear. Nor was it apparent what business it is of a foreign politician to interfere with the internal judicial system of the United Kingdom.

Wilders incited the crowd by commenting on “mass immigration” saying “We are almost foreigners in our lands”. It was not clear who exactly he was referring to when the foreigner said ‘we’, but clearly not the British public. Some have suggested he was referring to the ‘type’ of white supremacists whom he found ideological familiarity with.

In a thinly veiled attempt at incitement to violence, Wilders referenced the “liberation” of Netherlands from Nazi Germany by British soldiers and said the UK Government had placed a “Tommy” (which was the Dutch term for the British soldiers) in jail, despite Tommy Robinson being a pseudonym, and boldly claiming “we will never surrender”.

The racist politician referenced the “thousands” of “your daughters” who had been raped by the (Muslim) “grooming gangs’ and called for the crowd to stand against “shariah law” and “barbarism”.[5] Wilders calls to “protect our people” were a patently racist attempt to incite violence and called for the immediate release of Tommy Robinson.

Following the speech hundreds of far-right demonstrators chanted “Free Tommy Robinson” as they hurled missiles and smoke bombs at the police. Clearly incensed by Wilder’s speech, others stormed an open-top sightseeing Mega bus waving Union Jack flags and causing significant criminal damage.[6] Another mob gathered outside 10 Downing Street and was encouraged by the same individual who stood behind Wilder’s during his incendiary speech, with some commentators suggesting the implication being the violence had the full support of the organisers.

The ugly events of yesterday also beg the question of why Wilders, who was convicted of a criminal offence in 2016,[7] was allowed into the UK to propagate his particularly virulent and non-peaceful message in the first place.  When the likes of Dr. Zakir Naik are deemed sufficiently threatening to prohibit from crossing the border, it is alarming that Wilders was allowed to step foot in this country with the full knowledge by the authorities that he is a threat to peace and stability. Wilders’ entrance to the UK follows the Government’s curious decision to grant a visa to another fiercely anti-Muslim foreign national and criminal Tapan Ghosh who had praised the genocide of Rohingya Muslims, called for the UN to control the birth rate of Muslims and claimed one million children had been raped by Muslims.[8]