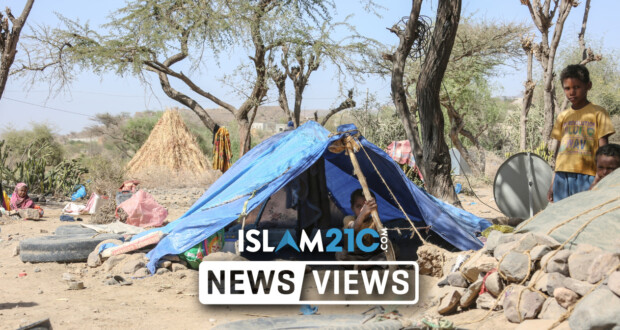 War-torn Yemen on brink of famine

In a damning report by the International Rescue Committee (IRC), Yemen sits atop its worldwide rankings of countries most likely to be at risk of famine in the year 2021. [1]

The Republic of Yemen, devastated by a civil war that has in effect been a war by proxy between regional rivals Saudi Arabia and Iran, continues to see a steady degradation in living standards as more and more of its citizens are falling at risk of serious “humanitarian catastrophe”. [1]

“Yemen tops the International Rescue Committee’s annual Emergency Watchlist for the third year in a row: a consequence of over five years of war and severe underfunding that has pushed the country to new lows in 2020.” [2]

The IRC’s Emergency Watchlist is an annual list which is put together to act as a “call to action for global leaders and the general public”; Yemen has the unfortunate title of being on the top of the list for the past three years running.

As stated in the report by the IRC, it is shifting to such a low point that many Yemenis are more fearful of starvation and malnutrition than COVID-19.

“Yemenis tell the IRC that they are more concerned about hunger than COVID-19, although the pandemic is increasing the risk of famine by deepening Yemen’s economic crisis.

The war has destroyed many Yemenis’ livelihoods, leaving over 80% of the population reliant on humanitarian assistance. The rial, the currency of Yemen, has lost 25% of its value in 2020 alone while rising fuel prices and shortages drive up the cost of food and hinder aid.

With the COVID-19 pandemic further restricting people’s ability to earn a living, the World Food Program has warned that many Yemenis could be on the brink of famine in 2021. Nearly 17,000 people are already facing famine-like conditions and this could increase to up to 47,000 by June.” [2]

With the civil war showing no signs of slowing, it is concerning that in the 21st Century, any group of people let alone an entire nation is allowed to suffer such a terrible fate. As the UN Secretary-General, Antonio Guterres, put it:

“Yemen is now in imminent danger of the worst famine the world has seen for decades. In the absence of immediate action, millions of lives may be lost… I urge all those with influence to act urgently on these issues to stave off catastrophe, and I also request that everyone avoids taking any action that could make the already dire situation even worse.” [3]

Food supplies are already being provided for a staggering 13 million Yemenis (43% of the total population), the Executive Director of the UN’s World Food Programme, David Beasley, has said, while urging the UN Security Council “not to turn their backs” on the Yemeni people. [4] [5]

We provide food for 13M people in Yemen – 9M of which are already on half rations. In January, we will be forced to cut rations again if no funds arrive.

This will be a catastrophe, which is why I urged the @UN Security Council not to turn their backs on the people of #Yemen. pic.twitter.com/ABBuY1AqO2

The severity of the situation cannot be overstressed, as the UN seldom uses the word ‘famine’ unless describing truly dire circumstances. In fact, the last time a famine was declared by the UN was during 1991-92, when there was widespread destitution, mass displacement of the population, outbreaks of disease, and social collapse in the country of Somalia. [6]

“A famine can be declared only when certain measures of mortality, malnutrition and hunger are met. They are: at least 20 per cent of households in an area face extreme food shortages with a limited ability to cope; acute malnutrition rates exceed 30 per cent; and the death rate exceeds two persons per day per 10,000 persons.” [6]

The civil war rages on in Yemen, with various global powers putting their weight behind the sides of the Saudis and the Iranians, with the likes of the United States backing Saudi Arabia – all while over 85,000 children have been reported by Save the Children to potentially have died as a result of hunger. [7]