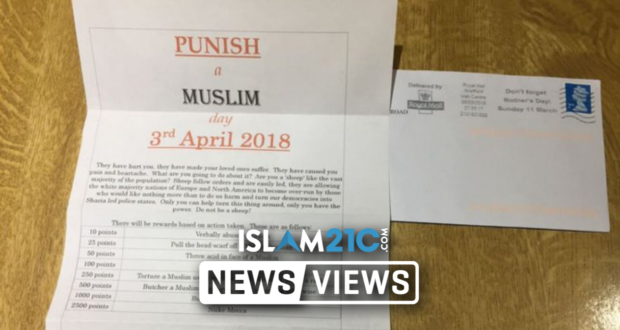 White supremacist to face jail over ‘Punish a Muslim’ letters

A man has been sentenced to jail for sending the infamous ‘Punish a Muslim Day’ letters across the UK.

David Parnham, 35, will serve 12 years and six months in prison after admitting to police that he sent the racist and Islamophobic letters to Muslim communities across the UK, as well as to the Queen, the Prime Minister, and politicians.

Parnham, who called himself the ‘Muslim Slayer’, was accused of 14 offences that spanned two years, including soliciting murder, noxious substance hoaxes, encouraging crime, bomb threats, and sending letters with the intention of causing widespread distress.

According to the Independent, the Old Bailey was told that Parnham began sending these letters to Islamic centres and mosques in 2007 across the UK, writing “you are going to be slaughtered very soon” and signing his name as the “Muslim Slayer”.

According to police, only 11 letters were delivered, with seven being intercepted at a depot. After this interception, police launched an investigation.

Parnham also wrote a fan letter to the white supremacist terrorist Dylann Roof, who murdered nine African-American churchgoers in the US. Parnham praised Roof’s actions and thanked him for awakening him.

“I just wanted to thank you for opening my eyes. Ever since you carried out what I’d call the ‘cleansing’, I’ve felt differently about what you’d call ‘racial awareness’,” Parnham said in his letter to Roof.

“My main reason for disgust is Muslims. I hate these animals with a passion. I sent letters with white powder to some mosques in London. They had to close down parliament because of it,” he added.

On Monday, a Muslim woman had her niqab ripped off by a racist woman and was repeatedly attacked and punched in the face in front of her children. The attack took place in north London and prompted outrage from the local community who posted a statement on Facebook:

“This is a racist and Islamaphobic [sic] attack as the woman was shouting: ‘go back to your country’, ‘Why are you wearing this’. We must make sure that that our Hijabi, Niqabi, women can safely walk to the station, please, young people, organise a good presence around the Walthamstow Central area.”

“Police are aware of an incident in Walthamstow on Sunday where a lady was assaulted and her headscarf pulled off,” local police said in a statement on Twitter, adding that “the female believed responsible has been arrested & police (& health services) are investigating. Additional patrols are in place.”

In the last three years, there has been a sharp rise in Islamophobia and anti-Muslim hate crime in the UK, with 2017 having a record number of attacks against Muslims. In 2018, there were over 1,200 reports of Islamophobic attacks, a 26% surge from the previous year.

Islamophobic incidents have risen significantly due to a number of factors such as Brexit and the proliferation of far-right groups manipulating peoples’ misconceptions on immigration and faith.

2019-09-03
Muhammad Mussa
Previous: First translator of Qur’an into Russian, Sr Valeria Porokhova, returns to her Lord
Next: UN: Britain may be complicit in Saudi-led war crimes in Yemen