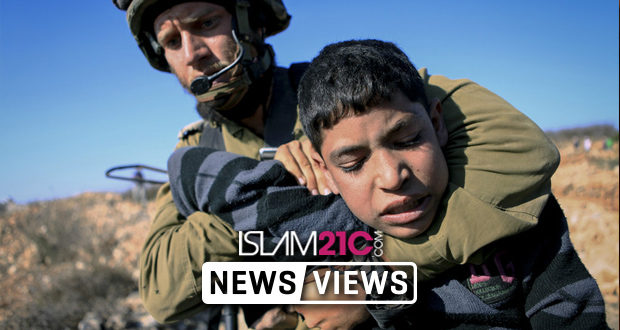 A report by the ‘Palestinian Society Prisoner’s Club’ (Naadi al Aseer al Falastini) indicated that there are almost 300 Palestinian children in Zionist jails, including 10 girls, while 100 others are under house arrest in different parts of Palestine.[1] [2]

The Non-Governmental Organisation, dedicated to supporting Palestinian prisoners said in a Press Release marking World Children’s Day on Monday 20th November that Zionist Occupation Forces have arrested 1,150 children since the beginning of 2017. Such sporadic arrests occur on a daily basis with the report adding that “numerous crimes are committed against these child detainees from the moment of their arrest leading onto the violent way in which they are pulled out from their homes in the late hours of the night.”

According to the Palestinian Society Prisoner’s Club, detained children are also subjected to “live and intentional gunfire and transferral to detention centres without being given food or drink, beating, insults, profane language, threats, terrorisation, forced confessions under severe pressure, threats and the imposition of hefty fines.”

According to the head of the Prisoner Club Qaddura Fares, “since the outbreak of the Al-Aqsa Intifada in September 2000, Israel has arrested at least 7,000 Palestinian children aged between 12 and 18” many of whom reached the age of 18 whilst still in custody. Fares added that since 2015 new laws have allowed for high sentences against Palestinian children. In some cases, sentences of more than 10 years up to life have been given. Fares stressed that the issue of Palestinian child prisoners ought to be better addressed by international organisations and Human Rights bodies, particular UNICEF, that professes it is the leading organisation working for children in danger.[3]

In an age that promises doing 'whatever you want' is the key to happiness and prosperity, al-Hujuraat reminds that if the Prophet were to obey you in many of your liberties, you would in fact suffer.

Is the killing of Sulaimani a sign of weakening US influence in the Middle East?