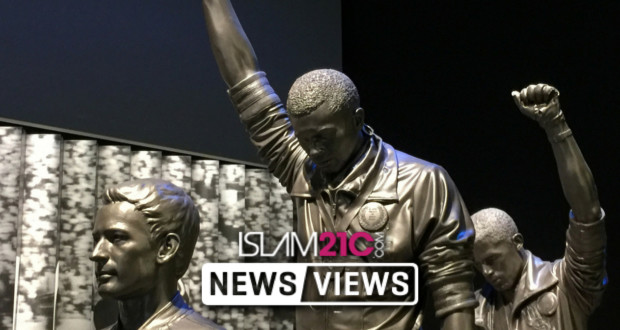 Xherdan Shaqiri and Granit Xhaka, two premier league footballers of Kosovo-Albanian heritage represented their country, Switzerland, in the World Cup. Over the weekend, in a match against Serbia, both hit the headlines with their goal celebrations. Both players made a ‘double eagle’ with their hands – a clear reference to the black eagle on the Albanian flag.[1]

Shaqiri and Khaka families had both sought refuge in Switzerland as a result of the war in Kosovo – one of independence against the oppressive policies of Serbia against the Muslim majority country. Serbia enjoys significant Russian support for historical reasons, including the Pan-Slav movement and whilst the wars in the Balkans are too complicated to discuss here, Shaqiri’s and Xhaka’s political celebrations should be viewed within the context of the historical background.

George Orwell, famously wrote “Sport is war minus the shooting” and indeed sport does have a long history of political protest. Possibly the most famous image among them is two black men giving the black power salute in 1968. You have probably seen the picture, but don’t know the names: John Carlos and Tommie Smith.

Born in Harlem and raised listening to speeches from Malcolm X, who would have thought this young black boy would have such an impact on the 20th Century. As a child, Carlos wanted to be a swimmer but his dreams were shattered when his father informed him the facilities he needed were in the private white only clubs.[2] So, Carlos turned to another natural talent, running, and in 1968 won the Olympic bronze medal for the USA. As the star-spangled banner begins to play, John Carlos and Tommie Smith, two black Americans wearing black gloves, raise their fists in the black power salute earning their place in history. The silver medallist, caucasian Peter Norman, wore an Olympic Project for Human Rights badge in support of their gesture. When Norman died in 2006, Carlos and Smith were both pall bearers at his funeral.[3]

Both black men paid a significant price. Rather than be received with applause, the crowd booed and hissed. People threw things and shouted racial abuse: “Niggers need to go back to Africa” and “I can’t believe this is how you niggers treat us after we let you run in our games.” Smith and Carlos were suspended from the US team and unceremoniously expelled from the Olympic village. Time magazine showed the Olympic logo with the words: “Angrier, Nastier, Uglier” whilst the LA times accused the black athletes of engaging in a “Nazi salute”. Given the Nazi view on blacks the irony was lost on them.

However, Smith and Carlos’ black power salute sent ripples across the world. It was seen as an act of defiance and resistance against oppression across the globe. Yet here we are, half a century on, celebrating the greatest spectacle in sport in a country which has committed war crimes against the defenceless Syrian people. Russia has been directly involved, or complicit in chemical attacks, barrel bombs, targeting of hospital and medical staff and the murder of children on an unprecedented scale. Despite Syria being conspicuously absent from our television screens the suffering of people, abandoned by the world, continues.

Despite his public bravado, Putin is a weak man who holds onto power with an iron grip by crushing political dissent. The World Cup is a perfect stage to humiliate him by political protest. If any brave footballer chooses to make a public political protest highlighting war crimes committed by Russia in Syria or indeed any of the myriad of domestic human rights abuses, he will have immortalised his name in history. Short of that, each kick of a ball, each TV show, each cheer endorses and gives credibility to the Russian regime.