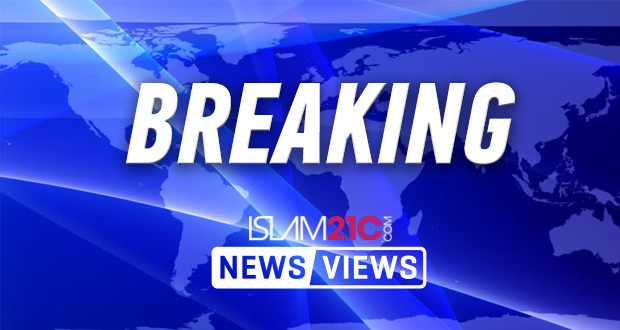 The ‘High Commission to Break the Siege’ reported that Zionist warships seized control of the Freedom Flotilla. The Flotilla’s aim was to break the 12-year long devastating siege imposed on the Gaza strip. [1]

Zionist forces captured the ship after sailing for four hours from the seaport in Gaza, approximately nine nautical miles (16km) from the Gazan coast. [2]

A correspondent of the Palestinian Information Centre – who accompanied the ship on its remarkable journey – reported that the flotilla crossed the boundaries imposed by Israeli occupation forces.

The flotilla was carrying at least 25 patients, students and activists. Zionist warships threatened the activists and surrounded their boats. An activist on the flotilla told reporters: [2]

“We are surrounded by Israeli warships to our left, right, front and back. We are stuck in the middle, […] safe and requesting your prayers.”

Under the Oslo Accords signed in 1993, ‘Israel’ is obligated to permit fishing up to 20 nautical miles, but this has reportedly never been implemented. Fishermen are routinely the target of gunfire and intimidation off Gaza’s coast.

Adham Abu Salmiya, a spokesman for the National Committee to Break the Siege, said that communication has been severed with the flotilla and reports suggest that it is heading towards the Zionist port of Ashdod.

The besieged strip of land has been under a Zionist blockade since June 2007. [3] It has been referred to as the “world’s largest concentration camp” by American academic Norman Finkelstein and a “prison camp” by former UK Prime Minister, David Cameron. [4] [5]