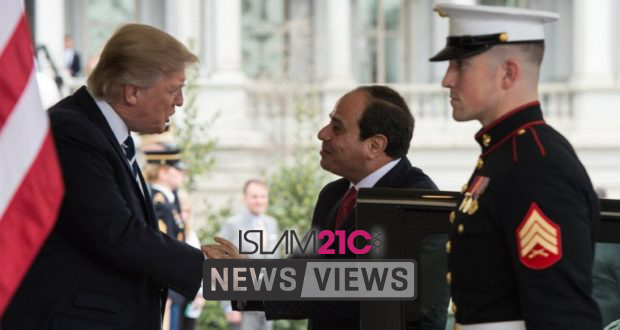 After waging war on its own citizens, coup regime authorities have unleashed their air force on numerous targets in Libya in what they claimed are the ‘training camps’ of the bus convoy attackers that killed at least 29 Coptic Christians in Minya province. The Libyan cities of Hun and Derna were the targets of Egypt’s attack, destroying a munitions depot held by the Government of National Accord. Despite ISIS claiming responsibility for the attack on the Copts,[1] Egyptian and Emirati war planes assaulted the very forces responsible for driving out ISIS from the coastal city of Sirte. According to the Egyptian army, the aerial assaults conducted over the weekend resulted in the destruction of the headquarters of the Shura Council of Mujahideen in Derna, known for their fight against ISIS. The council denied that it had been hit, but asserted that the warplanes damaged civilian infrastructure instead.[2] The council added that it had nothing to do with the attack against Egyptian civilians in Minya and heavily criticised Egypt’s targeting of densely populated eastern Libyan provinces.

Analysts claim the coupe authorities exploited the attack on Egypt’s Copts to support the self-proclaimed head of the Libyan National Army and CIA trained Khalifah Haftar; a staunch opponent of the internationally recognised Government of National Accord and Islamic rebels. Abdel Fattah el-Sisi, head of Egypt’s coup government, seeks to instate Khalifah Haftar as the head of the Libyan military to facilitate the quelling of Libya’s Muslim Brotherhood that had secured much of the 2012 elected General National Congress.[3] The coup head’s relationship with Haftar is not just defined by significant arms deliveries, but a shared common goal of eradicating political Islām, irrespective of the will of the national electorate. In a recent statement addressing Egypt’s haphazard bombardment of Libya, the Muslim Brotherhood stated:

“The coup’s mobs’ incapability of finding the real perpetrators behind the harrowing Minya incident, and others before it, has caused it to recklessly target our brothers in Libya… This aggression is an attempt to run away from conducting an essential investigation to identify the real perpetrators….we condemned, and will forever condemn the real perpetrators behind the Minya crime, only for its punishment to befall the Libyan people of Derna, those who, by the testimony of the whole world fought ISIS and expelled them. All facts point to Haftar, Sisi’s ally as a complicit supporter of ISIS…”[4]