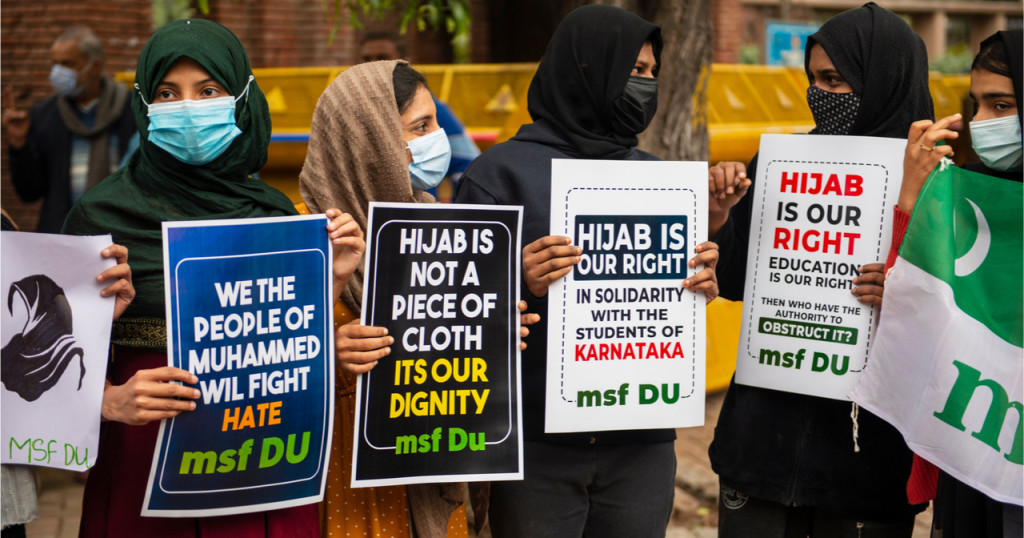 The Hindu nationalist Prime Minister of India appears to be taking another step in his desire to cause unnecessary and manufactured friction between the country’s Muslim and Hindu populations. Indeed, in the latest development surrounding the recent Karnataka state hijab ban, the Indian state’s high court ruled on Tuesday that a hijab prohibition was valid.

The ruling has empowered Modi’s base as Karnataka state is ruled by the BJP (Bharatiya Janata Party). The high court’s move – which affects thousands of Muslim students – has also infuriated broader members of the state’s Muslim community as the ruling incredibly states that the hijab is not “essential” to the Islamic faith. [1]

As to some background on this contentious issue, the south-western Indian state of Karnataka began to see protests take place in early January, when a group of Muslim students at an Udupi college insisted on their inalienable right to don the hijab during classes. Teachers reportedly allowed the girls to maintain their hijab around campus, but not in the classroom.

While similar protests have taken place in Karnataka in previous years, this current situation is notable, particularly as it has been spectacularly spun into a major political weapon. There have been reports of Hindu students wearing saffron-coloured shawls in protest against Muslims wearing hijab, and the likes of the so-called Bajrang Dal (translated as the Brigade of Hanuman and a major far right Hindu nationalist militant group that is ideologically aligned with the Hindutva movement) and other extremist groups throwing their weight behind the ongoing fallout.

For the Indian leader Modi – who faces a general election in 2024 – he recently received a major political boost when staunch ally and extremist anti-Muslim Hindu monk Yogi Adityanath won state elections in Uttar Pradesh (UP) on March 10.

The saffron-robed monk and Chief Minister of UP, who is notorious for his violence-inducing rhetoric, once stated in a public speech in the city of Azamgarh, “…if they take one Hindu girl, we will take 100 Muslims girls.”

In claiming that he would retaliate with force as regards inter-religious marriages and conversions to Islam by Hindu women, Adityanath reportedly said, “…if they kill one Hindu, there will be 100 that we [kill] … We will return whatever they do 100 folds, with interest.” Riled-up supporters subsequently shouted “kill” in response to his alarming rhetoric. [2] [3]

ECJ rules hijab can be banned in workplaces “under certain conditions”

Featured: Why I won’t cry about hijab bans