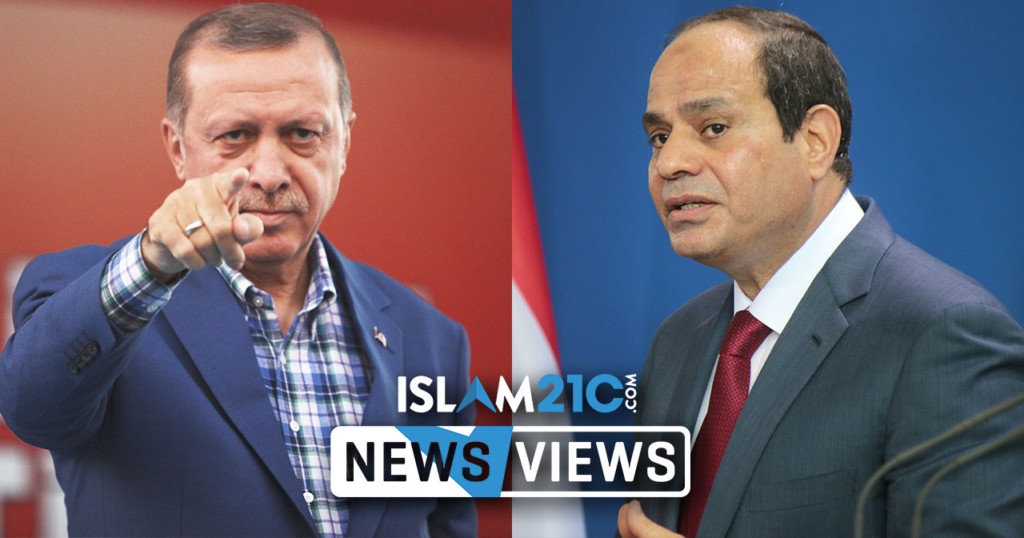 The Egyptian coup president Abdel Fattah el-Sisi has called on the Egyptian army to be ready to carry out missions inside or outside the country in order to supposedly protect its national security.[1]

The ex-CIA asset and head of the so-called ‘Libyan National Army’ (LNA), [2] Khalifa Haftar, is supported by the UAE, Egypt, Russia, ‘Israel’, and Saudi Arabia. These states are reported to have supported Haftar’s ‘LNA’ with both money and military supplies, and have also been responsible for carrying out several airstrikes in Libya. [3]

Forces loyal to the renegade commander have suffered heavy setbacks in recent weeks as the internationally recognised government of Libya regained control of key towns and cities amid the recent capture of several Haftar strongholds.

Sisi has warned GNA forces in Tripoli not to cross the current front line between them and the brutal military commander’s eastern-based ‘LNA’.

With support from Turkey, the GNA recently reversed a 14-month assault on the capital by the ‘LNA’. The GNA accepted an offer from Turkey for logistical and military support, which has been successfully resisting attacks and advancements as it seeks to deter inhumane offensives led by forces loyal to Haftar. [4]

Diplomatic ties between Ankara and Cairo collapsed in 2013 when the democratically elected government of Mohamed Morsi was overthrown in a military coup led by Sisi, a move that President Recep Tayyip Erdogan has repeatedly denounced.

On Sunday, the Egyptian coup president toured an airbase near the Libyan border as he watched fighter jets and helicopters taking off. Sisi told air force pilots and special forces personnel at the airbase:

Sisi further added that the Egyptian army was “one of the strongest in the region”, saying: “It is a rational army; an army that protects and does not threaten … this is our strategy, our beliefs and our principles that we will never change.”

To an audience consisting of some Libyan tribal leaders, Sisi said:

“If some people think that they can cross the Sirte-Jufra front line, this is a red line for us.”

Sisi further added that Egypt did not want to intervene in Libya, but that “the situation now is different”.

Libya tells Egypt to ‘take your hands off us’

The Libyan government has hit back, denouncing Sisi’s threats and saying it would be considered a “threat to national security” and akin to “beating the drums of war”. [5],[6]

“We strongly reject what was said by Sisi and consider it a continuation of the war on the Libyan people, interference in Libyan affairs and a dangerous threat to national security.”

Abdurrahman Shater, a member of the GNA-allied Libyan High Council of State, tweeted:

“Take your hands off us. Do not repeat the tragedy in Yemen.”

Translation: El-Sisi’s speech in front of a crowd of his army near the border is beating the drums of war. Egypt has intervened [in Libya] for four years, which he denied and claimed his concern for Libya’s security. Libya’s security has been in danger since Egypt’s insistence on undermining democracy and installing a military man whose master we have previously rejected and brought down. Take your hands off us. And do not repeat your tragedy in Yemen.

Libya has been in a state of anarchy since the NATO-backed overthrow of the long-time authoritarian ruler Muammar Gaddafi in 2011. The humanitarian situation in Libya has severely deteriorated since Haftar’s assault on the country, with scarce supplies of food and medicine running out. [7]

With no pressure on Haftar from his Egyptian and Emirati military backers, nor from the international community, the prospect of Haftar halting his military campaign in favour of dialogue and reconciliation seemed increasingly dim. However, the series of recent military victories against Haftar’s forces may help liberate the entire country soon.