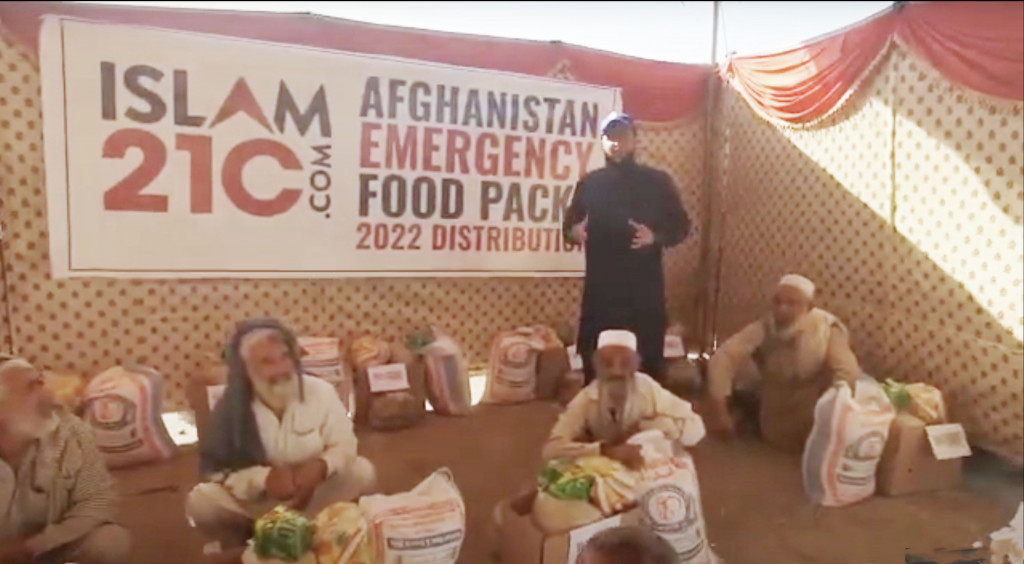 Zakat and Sadaqa from audiences and readers of Islam21c arrived in Afghanistan last week through the One Ummah Islamic charity organisation.

Ambassador Yusuf Chambers and Head of Operations Sumeir Masood travelled to the Afghan border in Pakistan to deliver vital aid and donations raised by supporters of Islam21c. The aid was delivered to thousands of Afghan families.

“So the need is massive amongst the Afghan community, both within and outside of Afghanistan and obviously those who have fled the conflict are residing in makeshift camps which we visited,” Ahmed Saeed added.

Afghanistan is facing a major humanitarian crisis following the end of the Afghan war in August 2021. International aid by western donors had been suspended due to the governing of the country by the Taliban.

The suspension of the much-needed aid has adversely affected Afghanistan’s people with 55% of Afghans expected to be hungry this year. [1] Decades of conflict and strife has exacerbated the situation in the poverty-stricken country leading to one of the worst humanitarian disasters in generations.

Due to the suspension of international aid, which amounts to unprovoked sanctions, aid organisations and charities have found it difficult to deliver much-needed provisions to impoverished and hungry Afghan communities.

40% of Afghanistan’s Gross Domestic Product has been hit by by the suspension in aid and as such existing stocks of food, fuel and aid are fast running out.

Due to the worsening situation, the United Nations Security Council in December 2021 reversed its decision to prevent the flow of aid and in a bid to ease the suffering allowed the delivery of aid into the country.

One Ummah have not just been distributing your donations in Afghanistan but they operate in 15 crisis areas around the globe. Here is a Palestinian family who received Zakat as a cash donation—as per the general consensus of established fiqh.

In recent years there has been increasing confusion over Zakat with more and more people under the impression that humanitarian projects can be funded using Zakat money. This is contrary to what many claim is a unanimous consensus of jurists classically opining that Zakat must be given to the needy in the form in which it is taken—in most cases today, money.

All your Zakat questions answered here