The world demand the liberation of Jerusalem 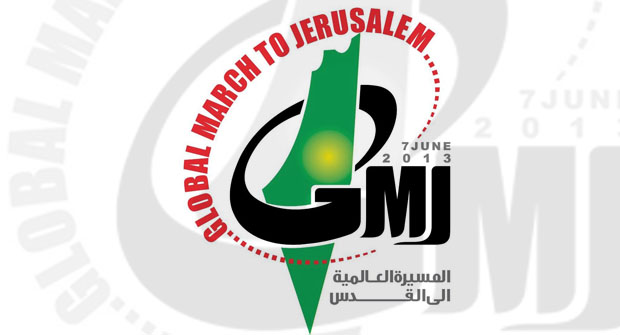 The Global March to Jerusalem (GMJ) is proud to announce our preliminary program for marches around the world on Friday, 7th June 2013, to mark the forty-sixth anniversary of the occupation of the eastern part of the holy city of Jerusalem, which includes the Al-Aqsa Mosque, the Church of the Holy Sepulchre and other sacred sites. The aim of this year’s GMJ is to raise global awareness about the continuing crimes against Palestinians in Jerusalem and the increasing violations against the holy city’s religious sites, both Christian and Muslim. This Friday, the GMJ will hold peaceful mass demonstrations in Palestine and the neighboring countries, heading towards Jerusalem or the nearest possible point, as well as in major cities around the world.

The first question we wish to address is, “why do we march?”

Over the last year in Jerusalem, we have witnessed the Occupation authorities:

At the same time, we have also witnessed Palestinians’ continued nonviolent resistance, including: a mass prisoner hunger strike; the erection of tent villages to protest against the building of more settlements; weekly demonstrations against the separation wall; and public campaigns demanding the right of return, an end to occupation, the boycott, divestment and sanction of apartheid institutions, and the liberation of Palestine.

Building on this Palestinian movement of nonviolent resistance, our peaceful march will send a strong message to the Zionist Occupation to confirm the following: that we have not, and nor will we ever, forget Jerusalem and its holy sites; that we will not be silent witnesses to the brutal crimes perpetuated by the Zionist Occupation against Jerusalem and its people, which threaten the holy city’s Arab identity and its Muslim and Christian holy sites; that we are coming; and that the free people of the world are with us.

On Friday, 7th June, the Global March to Jerusalem will hold peaceful demonstrations in Jerusalem, Ramallah and Bethlehem. Tens of thousands will mobilize in the Gaza Strip, heading towards the northern border near Beit Hanoun. Mass rallies will assemble in Jordan, Egypt, Tunisia, Morocco, Mauritania and Malaysia. Large protests will be held in Istanbul, Ankara and London, and people will gather in New York City and Vancouver.

The International Media Committee for the Global March to Jerusalem

The people will gather after Friday prayers to rally at the Damascus Gate.

Central and northern residents will rally at the Qalandia checkpoint at 12:30 pm.

The march will head north towards the nearest border of historic Palestine, where there will be a huge festival with a program that includes speakers representing diverse Palestinians groups along with the participation of international delegations.

The people will gather after Friday prayers, led by Dr. Salah Sultan at the Rabaa Adaweya Mosque in Nasr City, and then proceed towards the Unknown Soldier Memorial to finally gather at Cairo’s Stadium Square, where there will be an oratorical festival attended by many groups across the spectrum of Egyptian politics. Sheikh Raed Salah is expected to be the main speaker at the festival.

The people will gather at 4 pm at Montazah Beach to hold a mass rally.

The people will march from all Jordan cities towards the Jordan Valley, the gathering point to be in Sowayma between 5-7:30 pm. The program in Sowayma will include an oratorical festival attended by various Jordanian dignitaries.

The people will gather after Juma’a prayer in front of Al- Fatih Mosque in Istanbul, as well as in front of the Israeli Embassy in Ankara, at 2 pm.

After Friday prayers a huge mass rally will head towards the Avenue Habib Bourguiba, where the people will assemble at the Al-Aqsa Mosque Model to hold an oratorical festival.

In Mosques throughout the country there will be a Friday sermon about Jerusalem, and then the people will gather for a mass march and an oratorical festival in the capital city of Nouakchott. Smaller public festivals will also be held in a number of cities.

Starting in the last week of May, our national committee conducted an artistic, cultural and political campaign to raise awareness about the Zionist Occupation’s crimes against Jerusalem and its people. The culmination of these events will be a huge festival on 7th June in the capital city of Kuala Lumpur.

There will be a sit after Friday prayers in front of the Israeli Embassy in Moscow. On Saturday, 8th June there will be an oratorical festival at 5 pm that includes speeches and films about Jerusalem and Palestine.

On Thursday, 6th June there will be a cultural and intellectual event focusing on Jerusalem at the Dar es-Salaam Center in Berlin (Flughafenstr. 43 12053 Berlin) at 6 pm. On Friday there will be sit-ins in the cities of Aachen and Stuttgart.

Supporters will erect a tent of solidarity in front of the Norwegian Parliament on Friday, to screen movies and stage performances about the city of Jerusalem, as well as distribute brochures about the importance and status of Jerusalem historically for the three monotheistic religions. There will also be a vigil in front of the Israeli Embassy in Oslo.

The people will gather in London in front of the Israeli Embassy between 5:30-7:30 pm.

The people will gather in New York City at 1 pm in Washington Square Park and will head towards Zuccotti Park, the home of the Occupy Movement

The people will rally on Sunday, 9th June in Vancouver across the street from the Schara Tzedeck Synagogue on 3476 Oak Street between 4-6 pm.