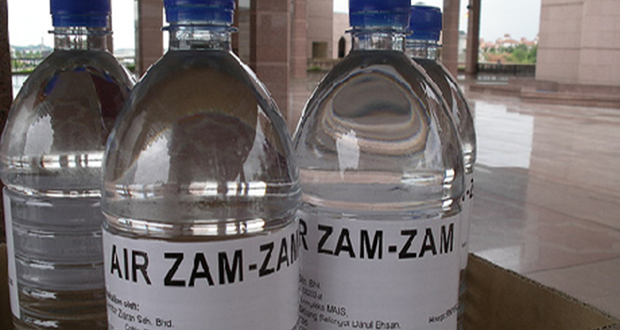 The BBC has recently highlighted concerns surrounding Zam Zam water that it is contaminated with harmful elements.[1] In an undercover investigation, they exposed the illegal selling of Zam Zam water in Islamic Bookshops and following analysis of the water being sold, they found high levels of nitrate and levels of arsenic three times above the maximum permitted level. Moreover, they asked an undercover pilgrim to retrieve some Zam Zam water from the source, and they found the composition of this water to be similar to that being sold in the UK.

Despite performing such a covert ‘sting’ operation, maybe one should try to give the BBC the benefit of doubt. Perhaps the sole purpose of conducting such an investigation is that the BBC genuinely cares about the health and wellbeing of the British Muslim Community, as opposed to using Islam yet again as the journalist’s trump card to boost television ratings.

The investigation performed by the Beeb actually has far wider implications than merely protecting the health of British Muslims. Their findings suggest that the monitoring of Zam Zam water is either non-existant or wholly inadequate and that the research which is being done on the properties of Zam Zam is not robust in its nature. In addition, as Zam Zam water is consumed by Muslims worldwide, the statement made by the president of the Association of Public Analysts that he “certainly would not recommend drinking it” goes totally against the belief of Muslims. Whilst Muslims may have differences on a number of issues, the belief in the miraculous nature of Zam Zam is something that unites Muslims around the world.

It is therefore paramount that if the Beeb is publicising such a high profile scientific argument that Zam Zam water is contaminated, the investigations should have been submitted for publication in a high impact journal in the relevant field. In doing so, their investigation would have gone through a robust peer review process, comparing their findings and methodology to existing literature in the field of investigation. The purpose of such a process is to ensure quality of scientific data, and eliminate all bias in scientific publications. Unfortunately the investigators have failed to follow this established protocol of entering into scientific debate on a matter. Based on this alone, one would have to conclude that the Beeb has been irresponsible in exposing the ‘contamination’ of Zam Zam on investigations which have not been peer-reviewed and thus potentially subject to bias.

The argument put forward by the BBC may be strengthened by the declaration from the Food Standards Agency that Zam Zam water being sold in the UK contains high levels of nitrate and arsenic. They further state that the risk posed to occasional drinking of the water by adults and older children would be very low.[2] However, such declerations do not seem to have been made by other similar agencies throughout the world. In fact Michael Herndon of the Food and Drug Authority in the United States made a statement in 2005 that the FDA has “..not heard any health alerts regarding Zam Zam water in US markets” and “If we thought there was a problem, we would alert the borders before the product enters the country”.[3]

Since then, the FDA has not made statements on its potential harmful effects. In addition, the World Health Organisation is yet to make a statement on the contamination of Zam Zam water. If the consumption of the water is a potential worldwide health concern, as depicted by the BBC, the fact that the WHO has totally neglected this implies that they have either demonstrated sheer incompetence, or that they do not feel there is sufficient evidence to make such claims.

Whilst the BBC can be criticised for publicising scientific information which has neither been peer reviewed nor been validated by consensus amongst similar bodies around the world, it is important for the Muslim community not to react to such claims emotionally. There may well be some truth in what the BBC has unearthed, and it is therefore important to examine their claims through the lens of science.

Arsenic is a heavy metal which exists in organic and inorganic forms. It occurs naturally in bedrock, where it dissolves readily into ground water through weathering or volcanic eruptions. It may also enter the water system through anthropogenic processes such as mining activities, the use of pesticides and the burning of fossil fuels with high arsenic content. In such instances, arsenic may be transported through long distances as particles in air or water.[4][5] Long term arsenic exposure may lead to Arsenicosis, which is typified by skin problems, cancer (particularly urological cancers), and diseases of the blood vessels of the legs and feet[6].

Nitrate is the most frequently introduced pollutant into the groundwater system[7]. Nitrate contamination usually occurs from diffuse sources such as intensive agriculture and unsewered sanitation in densely populated regions or point sources such as irrigation of land by sewage effluent[8][9][10]. The adverse health effects of high nitrate levels are well known. It may be particularly dangerous to infants, by affecting the ability of blood to release oxygen to surrounding tissues (methaeglobinaemia).[11] Nitrates are also associated with Non-Hodgkins Lymphoma and colorectal cancer[12].

The World Health Organisation has published standards for drinking water, stating that levels of arsenic should not exceed 10 µg/l[13]  and nitrate should not exceed 50mg/l[14]. The maxmimum level for nitrate is based upon epidemiological studies in which methaeglobinaemia was not reported in infants in areas where drinking water contained less than 50mg of nitrate per litre. However, the WHO state that with regards to arsenic there remains ‘considerable uncertainty’ over the actual risks at low concentrations. They have also said that in many countries the guideline value may not be attainable, and if this is the case, then every effort must be made to keep concentrations as low as possible.

[15] Whilst it is quite clear that extremely high levels of arsenic in drinking water can be detrimental to health (as evident in endemic areas such as South America, Bangaldesh and Nepal), the effect of chronic low level exposure is not so clear. Therefore, the labelling of Zam Zam water as poisonous on account of its arsenic content (which would at most be 30µg/l if we are to take the BBCs investigation as evidence) is perhaps an over-confident statement when one considers that the body setting the standard itself is uncertain on the matter.

The Saudi Geological Survery has a department dedicated to research on Zam Zam water.[16] It is however unfortunate that there has been very little contribution from this department to the scientific literature on the composition of Zam Zam water. Whilst the Saudi Geological Survey ought to be congratulated for their efforts in monitoring the water through the King Abdullah Zamzam Water Distribution Centre, it is a shame they cannot back their statements that the Holy Water is ‘not contaminated’ with valid scientific evidence

[17].  In fact, there generally is a paucity of high quality scientific analysis of Zam Zam water. As such, there is no ‘official’ statement on the exact composition of the water, and perhaps this information needs to be publicised given its mass consumption. Of the very few studies available, the analysis by Naeem et al[18] found levels of toxic elements including arsenic to be below the danger level of human consumption. However, the standard which they were testing against is unclear. A further study examined the level of nitrate in various parts of Saudi Arabia, and the found the average amount of nitrate in the wells of Mecca to be 41.8mg/l, with 21 out of 85 wells having nitrate levels above 45mg/l (which is 5mg/l less than the WHO limit)[19]. However, their studydoes not clarify whether they have included the Zam Zam well in their analysis. More recently, the Saudi Gazette reported that the King Fahad University for Petroleum and Mineral Resources perfomed tests on Zam Zam water using the latest technology and they concluded that the water is fit for human consumption[20]. However, perhaps the Saudi Gazette may be just as guilty as the BBC in reporting on an investigation which doesn’t seem to have been peer reviewed and published.

Alongside the provision of such data, it would also be prudent to look at epidemiological data on the occurrence of arsenicosis and methaeglobinaemia in areas where Zam Zam is consumed in high volumes, namely Mecca and Medina. Whilst the occurrence of arsenicosis is well documented in Bangladesh and the Far East[21][22][23], there is no published epidemiological data on the occurrence of these conditions in the Arab peninsula and furthermore, there is no epidemiological study on the occurrence of methaeglobinaemia in the Arab peninsula, implying that there has either been gross underreporting of these conditions, or that they are extremely rare entities. Thus in the absence of such data from the areas where Zam Zam is consumed in large quantities, it is difficult to accept the hypothesis that Zam Zam water is poisonous.

The BBC should have acted in a more responsible manner. The investigation into Zam Zam water should have been peer-reviewed by independant experts in the field and then be published in a reputable scientific journal before being given media attention. This is the general pattern that is followed when a clinical trial unravels a novel medication, or if a particuar medicine is deemed to be unsafe for consumption, and the BBC should have followed a similar protocol when publicising these findings. Perhaps the absence of a powerful drug company waiting to pounce on any hint of defamation gave the BBC some courage in publicising their findings. By presenting the results of their sting operation in such a fashion, one can only conclude that there principle motive was not to protect the health of British Muslims, but to create ‘good TV’ by playing the Islam card. In addition, academic institutions in Muslim countries, particularly the Saudi Geological Survey, should be encouraged to publicise their research on Zam Zam through scientific journals so that there is clarity on an issue which affects Muslims globally. Following scientific debate through publications and discussion at scientific meetings, should it emerge that there is robust evidence to prove that Zam Zam is poisonous to drink; the custodians of the Well should take the responsibility to ensure that the water is safe for human consumption.

Sources: This articles has been sourced from cageprisoners.com