And Gaza is Victorious 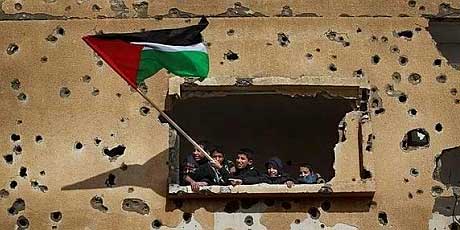 And Gaza is Victorious

“And on that Day, the believers will rejoice. With the help of Allah. He helps whom He wills, and He is the Almighty, the Most Merciful.” [1]

Allah is the greatest and to Him belongs all praise and thanks. For 50 long days, Gaza resisted in the face of the Israeli barbarism that fired in excess of 40 thousand tank and artillery shells, 2.5 million bullets and thousands of F16 rockets at the tiny strip. Despite being one of the strongest militaries in the world, ruthless in its pursuit of civilian casualties and despite having expended in excess of 61 million litres of fuel in its aerial and ground patrols [2], Gaza today hails itself victorious, triumphant and forever honoured, while Israel surrenders to its conditions. Today we celebrate with Gaza, rejoice at the fulfilment of the promise of Allah and congratulate the martyrs, the widows, the orphans and their supporters all over the world. We stand and salute the formidable men and women of the resistance who spent the days and nights of Ramadan studying the movements of the impending force, entering a tunnel and leaving another and spending weeks on end in areas confined like graves:

“When they came upon you from above you and from below you, and when the eyes grew wild and the hearts reached to the throats, and you were harbouring doubts about Allah.” [3]

Then when they emerged, they shocked their enemy, traumatised their advance and split apart their forces, moving like ghosts, unshaken in the least [4], infused with faith and determination and settled with patience and forbearance. Their relentless drive and passion was manifest at every level [5][6]. Through what they demonstrated, their status surpassed that of an ‘armed group’, forcing Israel to classify them as an organised army [7] that fights on all fronts and professional to unimaginable lengths. Their patience did not come as a surprise to us as nothing less is expected from the Gazans. The once unlettered refugee nation is now exporting a curriculum of lessons in courage and excellence to the whole world to learn from.

Today Israel is defeated and the Palestinian resistance, against the endeavours and hopes of the scorners, the traitors and the hypocrites is victorious. It was a war that saw the aggressor’s plan scuppered and the weaker in military; the defendant’s resolve unscathed. The war, which began on July 8, took 2,138 Palestinian martyrs, three-quarters of whom were civilians according to UN figures [8]. Without doubt, ‘combatants’ were compelled into resistance, thus supported by legal and moral legitimacy to doing so. Their aggressor, however, enjoyed no equal legitimacy in the war they waged against the civilian community. Today is a day we commemorate, a day in which we thank Allah for he has indeed “…fulfilled his promise, granted his slave victory and overcome the confederates alone.” [9]

“Fight against them so that Allah will punish them by your hands and disgrace them and give you victory over them and heal the breasts of a believing people.” [10]

How are the Palestinians (and all their Supporters) Victorious?

This question, and indeed much of the rhetoric surrounding operation ‘Protective Edge’ can easily be dealt with by inverting its logic. Indeed western media is already watering down the significance of this event and brushing it away as a Hamas claim or as a ‘victory’ stated in inverted commas [11]. The question should be, what did the instigating assailant in the conflict, Israel achieve? Netanyahu has just agreed to the conditions ratified by the resistance, has abandoned Israel’s insistence on al-Sisi’s first proposal, no longer claims that a functioning seaport and an airport in Gaza compromises ‘Israel’s security’, and has now agreed to release the Palestinian prisoners illegally re-detained after the Gilad Shalit prisoner deal [12]. Israel has also been compelled into agreeing an extension to Mediterranean Sea access for Palestinian fishers, reaching a distance of six miles, precisely as the resistance demanded right from the start. It will further address Gaza’s electricity crisis, has agreed to halt assaults and incursions into the strip and will open border crossings thus effectively lifting the seven-year-old siege. Negotiations surrounding the resistance’s other key demands will commence within a month backed by ‘Egyptian guarantees.’ [13]

Israel’s unclear or rather absent objectives in its war, eventually settled around the “demilitarisation of Gaza,” [14] the halting of rocket-fire and the destruction of “tunnels constructed by Hamas militants.” [15] As for the demilitarisation of Gaza, the truce that Israel has succumbed to does not even make mention of the resistance’s military capabilities as merely discussing this was outright rejected by all armed factions. Surrounding the ‘destruction of tunnels’, Aljazeera and other outlets have produced concurrent video footage from within the resistance’s attacking tunnels, days after Israeli withdrawal of ground units. [16] Israel failed to achieve anything but international resentment due to its brutality against the civilian populace, its exterminating of eighty-five families, injuring of 12,656, destruction of forty-five clinics and fifteen hospitals in addition to flattening wide areas of civilian infrastructure. [17] Despite that, not the least form of frustration at the resistance could be noticed when Palestinian victims were interviewed. All that occurred on their tongues was the mentioning of their Lord and their saying: “we are with the resistance all the way.” The latest talks collapsed on August 19, and in spite of Israel killing 117 civilians and destroying a “16-storey complex in the Nasser neighbourhood, in which there were 60 flats and a shopping centre.” [6] The resistance was nonetheless undeterred from remaining patient and persevering until the very end, understanding well the short-term repercussions. Now the Gazan nation applauds them from one side of the strip to the next. [18]

“…And know that victory comes with patience, relief with affliction, and ease with hardship.” [19]

This Zionist all-round failure of an offensive cost the entity six billion dollars [20] and counting. Israel is now more resented than ever before with thousands enacting financial boycott that is set to persist. So let us ask the question again, what has Israel achieved apart from fulfilling the demands of the resistance, something that would have probably not occurred without this conflict? Stopping Israel from achieving its objectives is enough of a victory, but what the resistance has forced Israel to agree to is far beyond. It negotiated and repeatedly withdrew from Cairo, staging false buoyancy by claiming it would never negotiate ‘under fire’ [21] before returning to negotiation, ‘under fire’ and kneeling to Palestinian demands.

People of Gaza, your unyielding men and women, unshakable and infused with faith in Allah are what have excelled you far above the suspicions of the pessimists. We remember the martyrs, and our hearts are with our families who lost their close kith and kin. But we also remind ourselves that they indeed have unequivocally attained Paradise by the permission of Allah, an end we all seek and a reward that we earnestly strive for, either successfully or unsuccessfully, held up by the struggles of life and fearful of straying from the straight path. Your enemy has turned back humiliated and defeated. How can you lose if you remain as you are?

“Say: Do you await for us but one of two most excellent things? And we await for you that Allah will afflict you with punishment from Himself or by our hands. So wait; we too will wait with you.” [22]