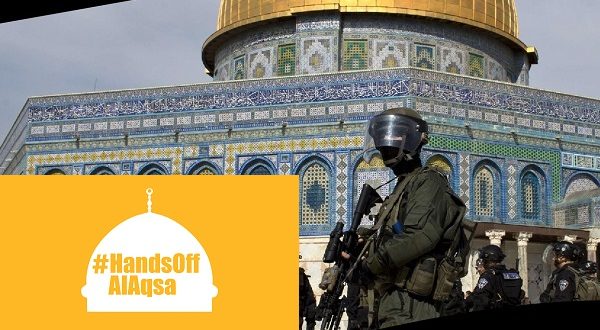 Israel’s attacks on Palestinians are continuing, as tensions increase in Jerusalem and beyond.

Israeli Prime Minister, Netanyahu, has announced the reintroduction of punitive house demolitions, an inflammatory and illegal act – whilst a further 200 settlement units have just been approved in East Jerusalem. This week Israel bombed a Palestinian fishing boat off the coast of Gaza, as attacks on fishermen become an increasingly common event. The UN are reporting a spike in the number of Palestinians with their homes demolished by Israel. Now Israel’s impunity looks set to continue with Israel refusing to cooperate with the UN Inquiry into the war on Gaza.

The Israeli far right have been mobilising, but not only at Al-Aqsa mosque. On Monday night, a violent extreme right wing demo by supporters of Yisrael Beiteinu, the political party headed by Foreign Minister Avigdor Lieberman, demonstrated in Jerusalem outside an art exhibition, this time directing their anger at B’Tselem, an Israeli organization that documents human rights abuses against Palestinians. At the demonstration, at least one person was physically assaulted, with shouts of ‘may you burn in the gas chambers’ directed against B’Tselem supporters.

The name of the Muslim that will liberate al-Aqsa

Help increase pressure on the UK Foreign Secretary, Philip Hammond, to take urgent action, and join the thousands who have already emailed him: http://act.palestinecampaign.org/lobby/ejerusalem

A London protest against Israel’s escalation of violence in Jerusalem, organised by MAB, IFE, APC, PFB, BMI and GUPS, is being supported by PSC and the Stop the War Coalition, and is taking place outside Downing Street this Saturday 15 November, from 1-3pm. View the poster here

The Zionist regime is carrying out massive violations in Jerusalem against the Palestinians and against the Al Aqsa Mosque. Stand firm to reject these hostile acts and reject the continued illegal settlement activities. Keep the pressure on the inhumane and brutal Zionist regime by support the various efforts to end the ethnic cleansing, to end the demolition of Palestinian homes and to end the violence of the illegal settlers.

Whilst some may believe there is little benefit or no significant outcome to marching or demonstrating for causes like this, we remind you that we are people who fear Allah believe in his Qadr and the hear after and that ultimately, it is only Allah who can and will bring about real victory and peace to the people of Palestine. So for us it is a case of doing whatever we can so that when we stand before Allah on the Day of Judgement and he questions us about what we did each time there was a crisis in the world, we can say that we did something to support the cause. Even though we have felt at the time it was small and insignificant, we took time out to make an effort and show that we care, rather then doing nothing at all. So with that in mind, uphold the rights for all Muslims to pray in the Holy Mosque and reject any attempts to close Masjid Al Aqsa and attend Saturdays march and also email the UK Foreign Secretary, Philip Hammond http://act.palestinecampaign.org/lobby/ejerusalem

Previous: A response to Katie Hopkins’ recent outburst
Next: Do you know Al-Aqsa?