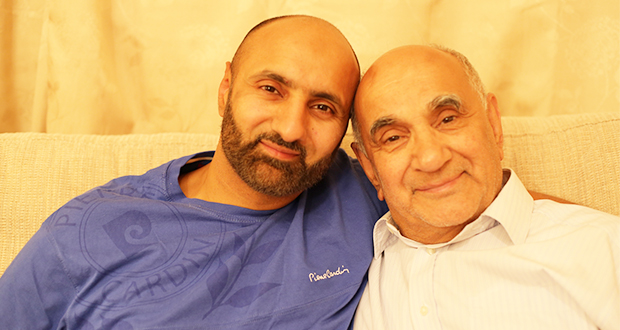 Both, however, relied on and complained only to Allāh for the injustice they suffered, and both were reunited in this life, which provoked a du’ā from Yūsuf after honouring his parents, which was so beloved to Allāh that He immortalised it in the Qur’ān for us to recite until this day,

And he raised his parents upon the throne, and they bowed to him in prostration. And he said, “O my father, this is the explanation of my vision of before. My Lord has made it reality. And He was certainly good to me when He took me out of prison and brought you [here] from bedouin life after Satan had induced [estrangement] between me and my brothers. Indeed, my Lord is Subtle in what He wills. Indeed, it is He who is the Knowing, the Wise…” [1]

It truly brings a tear to the eye to see Babar’s father finally smiling again after having his beloved son beaten, kidnapped, illegally incarcerated and then extradited thousands of miles away, tirelessly campaigning for his release.

Although we are happy that he was released, the injustice was not just that Babar Ahmad as an individual was taken away from his family. The injustice was the context and grounds under which his beating, imprisonment and torture took place and was justified. This injustice is still going on.

In fact, the ideological propaganda, grandstanding by politicians and draconian legislation that we have seen a rise in will likely lead to more victims of such miscarriages of justice. More than just Babar Ahmad and more than 11 years.

But we will never be subjugated

As usual we detest presenting a victimised mentality, or to accept to be subjugated. We must be very careful not to send this message to our community.

We as Muslims recognise that since the beginning of human history, people who hold firm to the truth are subject to smears, harassment, imprisonment and other injustices. This will definitely continue because this life is a struggle between truth and falsehood, and Allāh (subhānahu wa ta’ālā) wants to see which side we strive to be upon,

“…they disputed by [using] falsehood to [attempt to] invalidate thereby the truth. So I seized them, and how [terrible] was My penalty.” [2]

“…And if Allāh had willed, He could have taken vengeance upon them [Himself], but [He ordered armed struggle] to test some of you by means of others…” [3]

So the people of truth should always be ready for this, and justice will never prevail in the whole world without their sacrifice. Their sacrifice is indeed only of the dunya in order to purchase their ākhirah.

We ask Allāh to release the rest of those held illegally or wrongly without recourse to justice and due process, and to return them swiftly to their families.

Babar and Talha Sentencing: A Welcome Anomaly | My Son Is Not a Terrorist But He Was Terrorised | Babar Ahmad and the Reward for Doing Good | Support Karl Watkins’ Private Prosecution of Babar Ahmad and Talha Ahsan | Seven Years in Captivity: Babar Ahmad Petition | Read the Script: Babar & Co. Verdict

We, the family of Babar Ahmad, are delighted to announce that by the grace of God,  Babar has returned home to us after 11 years in prison. Our lives will be enriched by his return. Although the past 11 years have been indescribably difficult for us all, we were heartened by Judge Janet Hall’s comments at Babar’s sentencing this time last year. She said:

“There was never any aid given by these defendants to effectuate a plot. By plot, I mean a terrorist plot … Neither of these two defendants were interested in what is commonly known as terrorism … It appears to me that he [Babar] is a generous, thoughtful person who is funny and honest. He is well liked and humane and empathetic…This is a good person who does not and will not seek in the future to harm other people.”

Today, we remember and thank all those who have supported us throughout. But for now, we kindly ask everyone to give us some privacy and space and not to contact us for the time being.

“11 years of solitary confinement and isolation in ten different prisons has been an experience too profound to sum up in a few words here and now. In October 2012, I was blindfolded, shackled and forcibly stripped naked when I was extradited to the US. Last week, US and UK government officials treated me with courtesy and respect during my journey home. “

“Today, I have absolutely nothing. Yet I am rich. All praise be to God.”

“In time, I look forward to sharing reflections on my experience to help inform others. I recognise that the world has moved on since 2004, yet in some ways, sadly it has failed to progress. “

“For now, I intend to reconnect privately with my incredible family, to whom I owe so much.  It was a great joy to celebrate Eid with them for the first time in 11 years and to hug three of my nieces and nephews whom I had never met before. It has been a long time.”

A high resolution version of the recent photograph of Babar since his release can be downloaded here.