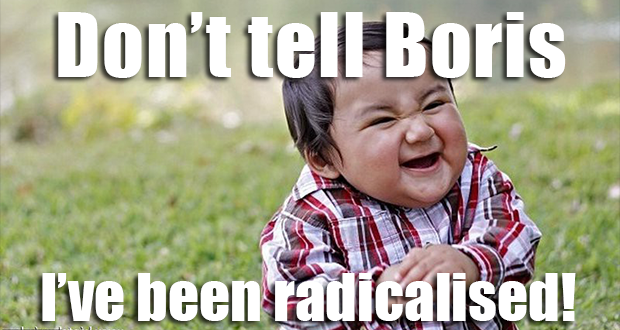 Isaac Newton said, ‘every action has an equal and opposite reaction’. While he was certainly referring to the governing laws of physics, this statement could be equally applied to religion and social justice. Whenever the Muslim community reasserts its identity, moves into a new phase of expressing its religious beliefs in the modern context, and most importantly, connects with a wider national movement for social justice, you will see a reaction from the government and media. A reaction which is increasingly desperate and aggressive. A reaction which is ultimately self-defeating. A reaction which in the long term, only serves to consolidate the Muslim community and propel its leaders into the forefront of a national movement for change.

Consider for example the arrest and detention of Moazzam Begg, a globally respected campaigner against state sponsored abduction, torture and illegal detention. The weekend saw protests attended by thousands across the country with Muslim and non-Muslim speakers sharing a platform displaying unprecedented unity and camaraderie. This movement is different to anything that has preceded it. It has a uniquely religious character and is spearheaded by confident Muslim leaders who are determined to realise their vision of a more just and compassionate society. Prior to Prophethood, the Prophet Muhammad (Peace and salutations be upon him) took part in a treaty where the noblemen of Makkah bound themselves to a solemn agreement that if they found anyone, either a native or a foreigner, who had been wronged they would ally with him against the aggressor and see that the stolen property was restored. With the advent of Prophethood, the Prophet Muhammad (Peace and salutations be upon him) would proudly state that he had witnessed, ‘a covenant which I would not exchange for any number of fine camels; if I were invited to take part in it during Islām I would do so.’ History is indeed repeating itself in front of our very eyes.

So what has been the reaction to the waves of protestors that gathered outside the Home Office building in Westminster demanding the release of Moazzam Begg? A reaction which according to Newton should be ‘equal and opposite’: quite simply, to threaten to seize the children of devoted Muslims and take them into care under the same farcical pretext of ‘extremism’! An idea so ridiculous and unworkable that the only politician who could champion such a strategy is the epitome of ridiculousness and impracticality, the Mayor of London, Boris Johnson!

Anybody who had the misfortune to read Boris Johnson’s article in the Daily Telegraph[1], would find it difficult to come to any other conclusion than, this man is bordering on insanity. I don’t say this due to his most foolish appearance, designed to convey an image of a fun-loving, straight-talking, intellectual and ending up looking more like a drunken and confused clown, but because he is so erratic and genuinely confused, and utterly abusive to the very electorate which appointed him! In an article that at best could be described as a rant, he uses incendiary language to compare Muslims to a disease, speaking of the ‘contagion of radical Islamic extremism’ and the ‘infection of radicalisation’. The all too familiar imagery of the ticking time bomb is used to demand the removal of Muslim children from their families, ‘before it’s too late’. A well-rehearsed strategy designed to induce mass paranoia where the basic civil liberties of people which this country has fought for over hundreds of years, are trampled on and due process thrown out of the window in the face of a ticking time bomb that needs to be defused. He then inexplicably draws a link between Islamic radicalisation and paedophilia, pornography and female genital mutilation! If at this point you were not left totally bewildered you certainly would be when Boris compares paedophiles to ‘other minorities’ and that ‘we need to be less phobic of intrusion into the ways of minority groups and less nervous of passing judgment on other cultures’.  A most offensive slur to the citizens of one of the most diverse and cosmopolitan cities in the world. Perhaps predictably, his solution is, ‘we need to be stronger and clearer in asserting our understanding of British values’. Values which he defines at no point in the entire rant because he is fully aware that every word he says contradicts fundamental British values of the rule of law, equality and common decency.

But perhaps the most spectacular own goal, a Boris special, even by his own standards, is the very title of the article which is pasted above an artist’s impression of Michael Adebowale and Michael Adebolajo in court as they were found guilty of the murder of Fusilier Lee Rigby. The title proudly states, ‘The children taught at home about murder and bombings’. Both of the men convicted of this heinous crime were brought up by devout Christians! In fact these men, far from being the product of orthodox Islamic teachings, are the very side-effect of a British society which has marginalised then exploited the vulnerable. Adebolajo was brought up in a tough inner city estate surrounded by a violent gang culture which has taken hold of the underclass. In his teens he witnessed the brutal drug related murder of a friend. In 2003 he converted to Islām and in 2010 he went to Kenya where he was detained and tortured by the authorities, allegedly with the complicity of British intelligence. Take an unstable, vulnerable young man with a violent past, subject him to repeated torture, attempt to recruit him as an informant then plant him back into society. What will be the predictable result? Quite simply, chaos and bloodshed.

However, it would be wrong of me to dismiss every word Boris says. He does make one single observation which is plausible, ‘I have been told of at least one case where the younger siblings of a convicted terrorist are well on the road to radicalisation’. Congratulations Boris! After aimlessly bouncing around from paedophilia to Harriet Harman to female genital mutilation to minorities you stumble upon the essence of the problem of radicalisation: the deliberate targeting of individuals, namely Muslims, that dissent from the prevailing views of the political establishment and are targeted with draconian ‘terrorism’ laws is the biggest cause of radicalisation. Homes are raided by armed officers in the middle of the night, property is stolen, husbands are detained under a parallel legal system, wives and children are left traumatised, and out of the ashes may indeed rise individuals not guided by the compassion, mercy and forgiveness of orthodox Islām, but full of hate, anger and vengeance.

It is not surprising that Boris chose to make such an outrageous threat as taking the children of devout Muslims into care. Had he consulted his own social services across London instead of seeing the protests in Westminster on Sunday and publishing an article that evening, he would have known that the fostering and adoption care system in London is at breaking point. There are simply not enough carers to even begin to contemplate his hapless theories especially when we hear from the Mayor of the, ‘hundreds of children’, ‘who are being taught crazy stuff’. Also however fractured our society may be, the whole idea of a selectively discriminatory law that targets one minority within a minority to seize their children would not garner support even from the most ardent of Islamaphobes. Because in doing so, it would leave vulnerable a whole host of other extremists who could be targeted by the same laws including parents from amongst the English Defence League, British National Party and pro-Israeli Zionists.

Again if Boris had consulted social care professionals, educationalists or even a humble classroom teacher he would have found out that putting children into care is considered the very last resort only to be used when the child is in imminent danger of physical or sexual abuse or extreme neglect. There is a very good reason for this. Children in care are considered the most vulnerable in society. They do, by far the worst in schools, hence they are given first priority for entry into their chosen school and receive extra government funding. They are the most vulnerable to physical and sexual abuse due to the absence of the support of their natural family. They are the most economically deprived due to the simple fact that no child ever fully recovers their self-esteem from being ripped apart from their natural family. There is a unanimous agreement between professionals and the wider community known as ‘sane people’ that the best place for a child is with their family.

As the Conservative party increasingly sees its support ebb away to UKIP and other closet racists we can expect more sabre rattling and sensational headlines as we draw closer to the general elections. There is nothing better than paranoia and fear to rally the masses.

The irony is that the very same children who Boris is targeting would have spent December 2013 sitting through school assemblies commemorating Nelson Mandela. A man who was a symbol of resistance against the state that turns its apparatus against its own citizens. Hindsight is 20/20. With such clarity we now view his struggle and celebrate his defiance against the apartheid state and honour his gracious act of forgiveness and reconciliation. This is despite the obvious opposition Boris’ colleagues had against Mandela, labelling him a terrorist[2]. What judgement will history pass on British society as it stands today? The arbitrary detention of Muslims under a parallel legal system; the arbitrary labelling of political dissent as ‘radical’ and ‘extreme’; the attack on religious symbols like the face veil; the demonisation of minorities with the inflammatory vocabulary of disease and the arrest of whistle-blowers that expose state sponsored torture. The signs are not looking good.

The corridors of power in Westminster were once alive with conviction based political debate and it has been sad to see the degeneration of the public discourse into threats of stealing your children and ripping away your face veils. But consider the refreshing sentiment of one of the young Muslim speakers who took the platform at the protest for Moazzam Begg outside the Home Office, ‘we are not victims, we are teachers!’[3] It remains incumbent on the Muslim community and the wider movement for social justice to remain on course and be resolute, and not to be distracted by side-show entertainers that dance for their public. We have a duty to preserve the legacy of this country for future generations. Indeed we are the teachers not the victims.