Hillsborough – a story of carnage, cover ups and corruption 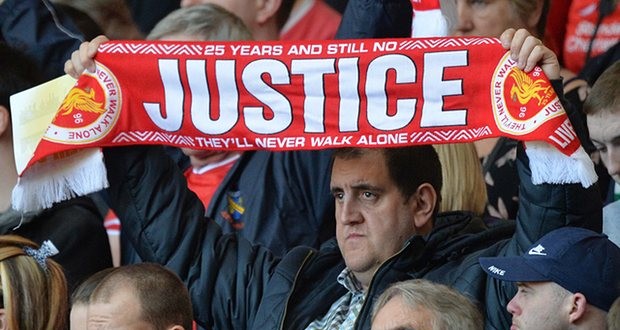 Few would have anticipated that a sunny Saturday afternoon in Sheffield in 1989 would have ended in English football’s greatest ever disaster. On the 15 April, thousands of Liverpool fans marched towards the Leppings Lane End of the Hillsborough stadium for the FA Cup semi-final against Nottingham Forest. Little did they know that they were heading towards a death-trap; a death-trap created for them through a combination of design faults, crowd mismanagement and professional negligence which eventually lead to the deaths of 96 people, and injury to 766 people.

The fans had been allocated the North and West stands of the stadium served by a narrow concourse creating a bottle neck when thousands attempted to enter the standing terraces before kick-off. A police constable on duty realised the potential for crushing outside the stadium and radioed in a request to delay the kick-off and ease the flow of people into the stadium, but the request was denied.[1] Instead a decision of monumental error was made by Chief Superintendent David Duckenfield of South Yorkshire police. In order to relieve pressure outside the ground, three exit gates were opened causing thousands of supporters to converge on a narrow tunnel leading to standing terraces directly behind the goal. These sections of the stadium, known as pens 3 and 4, were already critically overcrowded. With the entrance to these pens left unmanned by Police and Stewards, thousands of fans flooded in, wave after wave, creating massive pressure to the front of the pens. People were crushed against each other and against steel barriers on the sides and front of the pens. Those trapped were packed so tightly that many victims died of compressive asphyxia while standing.

As the disaster unfolded on national television, the response of the Police and emergency services would later be described as ‘grossly negligent’ by the 2016 enquiry. Chief Superintendent John Nesbit of South Yorkshire Police later briefed the Tory MP Michael Shersby, that the Police deliberately left the rescue to the fans so ‘they would not take out their frustration on the police’.[2] As fans tore down advertising hoardings to create makeshift stretchers and rushed the injured and dying to ambulances, the Police formed a cordon preventing them from reaching help for fear of rioting between opposing fans. Post-mortem examinations found many victims who were not killed by the crush had later died due to airway obstruction from being placed on their backs, rather than in the recovery position.

Of the 44 ambulances on site that day, incredibly, only 1 was given access into the stadium, while people inside lost their lives minute by minute. Of the 96 fatally injured people on that day, only 14 ever arrived at a hospital.[3]

The findings of the 2016 enquiry may have set the scene for prosecutions from the CPS but have the deeper social and moral lessons been learnt from Hillsborough? Has the country really come to terms with its past? Have we gone beyond the simple engineering solutions of redesigning stadiums to examine the social fabric of our society?

Derogatory stereotypes kill. They dehumanise victims and absolve perpetrators of crimes from responsibility for their actions. The prevailing stereotype of the English football fan in the 80s and 90s was that of a drunken hooligan. While this may have had some element of truth with alcohol-fueled crowd trouble being a common feature in the English game, it led to the victims on that fateful day being treated as animals, and the duty of care owed to them being completely neglected. They were herded into parts of the stadium known as ‘pens’ – a term used for enclosing animals. The over-arching steel barriers which prevented pressure from being released onto the pitch and side sections, were found to have holes in them where the dying desperately attempted to break through to safety. No self-respecting farmer would allow his sheep or cattle to be treated in this way but the authorities accepted human beings, including children as young as 10 years old, to be killed in this way. Now consider the stereotypes projected of Muslims in the public consciousness. Consider the relentless onslaught of the right wing media; the inflammatory language and lies of politicians reaching right up to the Prime Minister, himself; the raft of anti-terror legislation creating a parallel legal system disproportionately targeting Muslims, and the general discourse surrounding the place of Muslims in British society. Derogatory stereotypes kill. They create the conditions for the most outrageous acts of injustice to be normalised and the suffering of victims to be dismissed.

Despite the disaster unfolding on national television, the campaign of misinformation began almost immediately. On the 19th of April, four days after the disaster, the Editor for The Sun, Kelvin MacKenzie, ordered the front page headline ‘The Truth’. It claimed, ‘Some fans picked pockets of victims’, ‘Some fans urinated on the brave cops’ and ‘Some fans beat up PC giving kiss of life’. Based on false statements from senior police officers and local Conservative MP, Irvine Patnick, a smear campaign was well under way to shift blame to the victims and portray them as marauding, drunken hooligans, responsible for their own deaths. To this day The Sun has not changed its policy of exploiting the dead and hijacking the narrative in a disaster. In the wake of the Paris attacks, The Sun ran a discredited headline, ‘One in five Brit Muslims’ sympathy for jihadis’, only to be ordered by the Independent Press Standards Organisation (IPSO) to print a retraction admitting the claim was significantly misleading. Time and time again we have seen the corrosive effects on our society of the alliance between the right-wing media, senior police officers and senior politicians riding the wave of public fear and anxiety.

The Hillsborough disaster shows the extent to which fundamental instruments of civil society, such as the Police and emergency services, can betray their core purpose when motivated by self-interest and when not properly held to account. The Taylor enquiry concluded in 1990 that ‘the main reason for the disaster was the failure of police control’ but there has been no prosecutions for corporate manslaughter arising out of gross negligence. In 2016, after a 27 year battle by the families of the victims to clear the names of their dead loved ones, a verdict was returned by an enquiry that the victims were unlawfully killed as a result of many reasons including poor police management, stadium design and maintenance and inadequate response by emergency services. But there have been no criminal prosecutions to date.

Many are unaware of the shocking level of the cover-ups in the wake of Hillsborough. The Taylor enquiry concluded South Yorkshire Police senior officers were ‘defensive and evasive witnesses’. The Hillsborough Independent Panel concluded in 2012 that 164 witness statements had been altered, with 116 statements amended to remove or change negative comments about South Yorkshire Police. It also found that South Yorkshire Police had performed blood alcohol tests on the victims, some of them children, and ran computer checks on the national police database in an attempt to ‘impugn their reputation’. The report concluded that the local Tory MP, Irvine Patnick, passed inaccurate and untrue information from the police to the press.[4]

Underlying these cover ups which have spanned over almost three decades is a toxic class divide. The victims were working-class Northerners, maligned in the media, and caricatured as parasitic drunken thugs. Their loss could be tolerated and justice was a privilege that they were not entitled to. Consider now if the tragedy had taken place at Ascot during the Gold Cup, where royalty and the rich descend to Berkshire for the country’s premium flat race. No stone would be left unturned in the pursuit of truth and justice. The loss would be mourned across the country with a collective show of grief, and prosecutions would swiftly follow. Whether it is a religious divide, or a class-divide, there are sections of our community for whom the wheels of justice simply do not turn.

It is the Sunnah of Allāh in dealing with His creation to support the oppressed when they stand up for justice. The families of the deceased fought hard for 27 years against an intractable elite. They refused to wallow in self-pity and continue to actively pursue those responsible for their loved ones’ deaths. Sheikh ul-Islām, Ibn Taymiyyah, famously said,

Muslims must understand that as ambassadors of the final revelation they are charged with the duty of actively opposing every act of injustice. This begins with the injustice towards the Creator; that He creates people, provides for them and guides them while they deny His sole right to be worshipped. But it also includes the injustice towards the Creation; that there are sections of our society that are disenfranchised and their lives do not have value. This is a religious duty and, as with all religious duties, it must be answered for in the Hereafter in the Court of the All-Knowing, the All-Wise.