The Niqab – a convenient veil for Islamophobia? 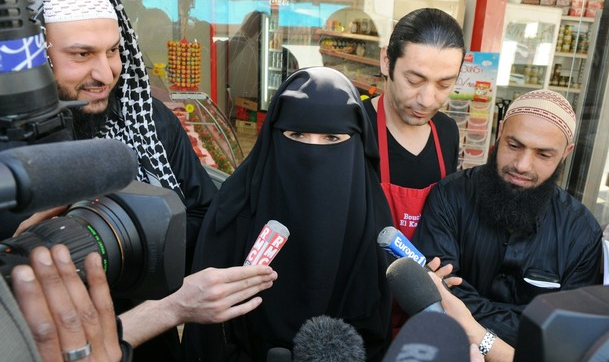 If I wasn’t someone with first hand experience, being a niqab wearing women myself, I would think that Muslims were a tad paranoid in saying that politics and the media run a recurring cycle of Islamophobic jabs. As a woman who has worn the niqab in England, it appears that when there’s little left to say , then the rather heated, yet over played topic of the niqab is a grand one to throw on the table. After years of bashing and negative coverage, more and more people have come to the exaggerated conclusion that the niqab is hugely detrimental to society, and few stop to ponder over the legitimacy of what the media portrays.

So is it just paranoia on our behalf. I for one can recall the first day I wore the niqab on the London underground over 15 years ago. I was a bit nervous, but happened to sit in front of a ‘punk’ lady, tattooed all over with pink hair. I clearly remember the pause as we stared at each other, followed by a sudden mutual smile as we found peace in each other’s uniqueness (you can tell when a niqabi smiles by the eyes). I never had any problems in those days, though a few years later I would find myself dodging tube cabins with groups of intimidating looking yobs . Now, sad to say, it’s not the typical skin head taking a jab at a single harmless woman, but just about anyone who feels it is totally ok to insult the woman in niqab. It would take a real emergency for me to get on the tube alone with my niqab these days. Recently, Conservative back-benchers brought forward a bill discussing a ban on the full face veil. The usual rhetoric of women being forced to wear it or it being a security risk has long been quashed by statistics proving that a large percentage of the women are British born, educated and often converts to Islam. As for the issue of security it should be acknowledged that much of the Muslim world operates with women fully covered, with hundreds of thousands passing through security checks every day. These women would not and should not have a problem in verifying their identity to female staff members, and this is typically done in airports or banks all of the time. MP Philip Hollobone who called for a ban in 2010, stating that British people like to smile and greet one another in the street. He obviously has had precious little else to do since then, as the issue has been burning on his mind for the last 3 years, no doubt he was gleeful when he finally got his private members bill discussed last Friday.[i]

The argument against the Niqab has often run parallel to immigration, and the idea that the presence of non-Brits has led to a number of problems here. It may look good to use a picture of niqab wearing women to show a group of immigrants, but this has also led to a huge amount of confusion and been detrimental to us. It is vital that we clarify that not all niqab wearing women are immigrants and that to vent the frustration felt towards the issue of immigration on a group, simply because they look the most foreign is unfair and unwarranted. From the hundreds of veiled women that I know, they are generally British born, educated, religious, focussed and courageous people, who have taken the brave step to pursue what they believe in. They are void of bad language, promiscuity, crime or abuse, and more than often are devoted to raising a wholesome family and contributing to society. It is about time that Britain took heed of this. If only they would look around society they would have to admit that veiled women are the least of their concerns.

Generally, the argument boils down to the fact that many Brits just don’t like the veil. But surely that alone cannot justify a ban, and it is worrying that the argument has reached parliament without really having a valid reason. For me, it highlights peoples deeper dislike towards Islam as a whole. Furthermore the idea that someone is so committed to Islam that they can abandon Western dress and liberal values it boasts, is interpreted by many as a rejection and degradation of British lifestyle. What needs to be clarified here is that when most women wear the niqab it is done to achieve a religious station of submission and modesty that is promoted by Islam, and not to spite society at all. The Niqab and hijab is worn in public, in gender mixed environments, outside of this many of these women observe a very British dress code, and lifestyle too as long as it does not oppose any matter from their faith.

It would be interesting to know how many of the people in parliament arguing the ban actually knows a lady who wears niqab. Most likely, their knowledge of the niqab extends from a skewed image from the media, and that within itself is bias. Also, who qualified certain people to sit back and dictate what is or isn’t good for a people who are in actual fact causing no harm. If what is occurring is indeed a reflection of Islamophobic tendencies then Muslims should stand beware of what they may dare ban next.

If we look at France, we ask exactly what did they achieve from banning an extremely small sector of society from wearing their religious choice of dress? The answer is nothing more than a gleeful jab at Muslims just because they could. France did not improve integration, instead it further ostracised veiled women, and clearly demonstrated its Islamophobic colours.
Our message to Parliament today, is not only to preserve the liberties that Britain so proudly boasts, but also to preserve the harmless and conforming rights of the Muslim woman to actively practise her religion. One may not choose that lifestyle for themselves but to ban it, when promiscuity and indecency are far greater harms to society, seems absurd.
[donationbanner]