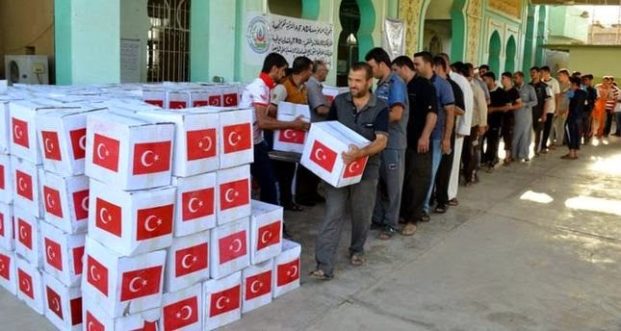 According to the Global Humanitarian Assistance Report 2017, Turkey has been ranked second in the world for humanitarian aid, ahead of EU institutions Germany and the United Kingdom. Turkey spent a staggering $6 billion on humanitarian aid in 2016, which is an increase of 119% on 2015. This is more than double what the UK (ranked 3rd) spent in the same year.[1]

In the last few years, millions of people have had to forcibly flee their homes as a result of conflict and persecution, which have destroyed families, communities, countries and regions. The report moves on to state that due to ‘ongoing and new crises’ those in need of international humanitarian assistance in 2016 were an astounding 164.2 million people in 47 countries across the world. It states that in just three countries – Yemen, Syria and Iraq – over a quarter of the 164.2 million people are in need.

65.3 million people, of which more than half are children, have been displaced as a result of violence and conflict according to the Global Opportunity Report 2017.[2] The UN Global Trends report states that if these 65.3 million displaced people were to be a nation, it would make up the 21st largest nation in the entire world.[3] This shocking figure is the highest recorded total to date.

The report also makes mention of a number of states who have the largest decrease of international humanitarian assistance. In the Middle East region several neighbouring countries such as the Gulf states have significantly decreased their humanitarian assistance. The report states that Kuwait decreased its funding by 50% whilst Saudi Arabia decreased it by 26% in 2016, totaling a substantial decrease of $614 million solely between the two Gulf states.

The report, which is published yearly by the UK-based Development Initiative Organisation, sheds some interesting light onto the world’s most generous and caring states.

Turkey’s contributions make up one-fifth of the total amount of aid given internationally ($27.3 billion in 2016) and has nearly doubled its own humanitarian budget to $6 billion. Between the years 2013 to 2016 Turkey upheld its stance on humanitarian aid and was placed on the list of the world’s most generous countries as either ‘third or second place’.[5]

Currently, Turkey hosts the most Syrian refugees as compared to any other country. The international community has contributed around $525 million for those who have fled within the borders of Turkey, however Turkey has spent a generous and considerable amount of around $25 billion.[5]

Refugees camps for fleeing Syrians were constructed in Turkey from as early as the year 2011.[6] In just two years those camps accommodated nearly half a million Syrian refugees while many western governments rushed to build walls to prevent their movement and burned and demolished their camps.[7][8] The latest statistics show that Turkey now accommodates nearly three million refugees.

In late May, at a meeting of the ruling Justice and Development Party, President Erdogan said,

“By helping three million refugees from Iraq and Syria, Turkey has taught a lesson of humanity to the countries which only observe humanitarian tragedies in various parts of the world,”[9]

Another region which Turkey has heavily supported is the Gaza Strip. A Turkish aid ship named “Sefkat” carrying approximately 10,000 tons of supplies to the blockaded Gaza Strip arrived on Wednesday at the Ashdod port in “Israel”. The supplies consist of food packages, biscuits, cakes and chocolates. It also carries bicycles, toys, stationery and clothes as Eid gifts for the children in Palestine who are under a severe and illegal blockade which is suffocating Gaza.[10]

The state-run Disaster and Emergency Management Authority (AFAD) transmitted the supplies and an official Cengiz Akin told the Anadolu Agency:

“In line with instructions of President Recep Tayyip Erdogan last year, we made our Gazan brothers and sisters happy [with the aid ship] before the Eid al-Fitr,” [11]

The above shows that there is a great influence of humanitarian aid and charity in Turkey. Humanitarianism is a crucial component to the Islamic way of life. It is a major principle in Islam and there are several Quranic and prophetic texts which encourage humanitarian acts. There are numerous examples of these within the two-main sacred texts; they are either defined as being obligatory or highly recommended and encouraged. Charity is one of the most important manifestations of an Islamic country. Many people do not relate the application of the Shariah to also include humanitarianism.

Abdullah bin Salam (May Allah be pleased with him) reported:

The Prophet (saw) said, “O people, promote the greetings, feed (the poor and needy) and perform Salat when others are asleep so that you will enter Jannah safely.” [12]

This was the founding statement of the Prophetic Islamic state, and shows the great emphasis and direct command the Prophet of Allah made to the Muslims with regards to humanitarianism and charity. It is something which should be applied by any Islamic country wishing to adhere to Islamic principles and the values taught and encouraged by the Prophet.

This “atom”, whether good or bad, will be carried forth and shown to its doer, who will then receive its recompense.

“But there are some hearts in this world which are unmoved even by mountains of sin and crime. They remain unaffected while suppressing fountains of goodness which are far firmer than mountains. These hearts are conceited on this earth but on the Day of Judgement they are crushed under their own burdens”. [14]

Several other verses emphasise the importance of giving including,

Syed Qutb comments on this saying,

“God’s true promise which will never fail is that He supports those who support Him. The question that arises here is who are these people that support God and thus deserve His support which means certain victory? Their qualities are outlined in this verse. They are those who, when given victory by God and are established in a position of authority, “attend regularly to their prayers.” They worship God alone, submitting themselves to Him willingly and strengthening their bonds with Him. They “give in charity”, thus they meet the liability imposed on their property. By so doing, they demonstrate their ability to overcome greed and self-interest, and they help their community to provide help to the poor and needy”

“…they “enjoin the doing of what is right.” They advocate every good thing and encourage people to practice it. By contrast, they also “forbid the doing of what is wrong.” They resist evil and corruption. In this way, they demonstrate a very important characteristic of the Muslim community which does not tolerate any wrong if it can change it, and does not hesitate to do any right thing if it is within its ability.” [16]

Likewise, there are also many remarkable statements from the Sunnah found in authentic hadiths which highly encourage charitable and humanitarian works.

The Turkish government and Turkish people have clearly shown its concern for humanity across the world in accordance to the humanitarian acts which Islam has emphasised. As a result, Turkey has become an example for other countries which have the ability to have a similar, if not far more effective, impact.

The entire Muslim world should learn from the actions of Turkey and ultimately those prescribed and commanded by Allah (swt) and His messenger. Muslims should act and live as though we are one body and if one of us is in need then the whole Muslim community should strive to get them back on their feet. In doing so we would be acting in line with the following Hadith which demonstrates a practical example of the Prophet’s description of the Muslim community,

“The believers in their mutual kindness, compassion and sympathy are just like one body. When one of the limbs suffers, the whole body responds to it with wakefulness and fever”. [18]

[7] Osborne, S. (2016). Britain is building a massive wall to keep refugees out. [online] The Independent. Available at: http://www.independent.co.uk/news/world/europe/britain-build-13ft-wall-calais-jungle-block-refugee-migrant-entering-uk-a7229386.html [Accessed 21 Jun. 2017].