‘Where did we go wrong?’ School leader speaks out on student suppression 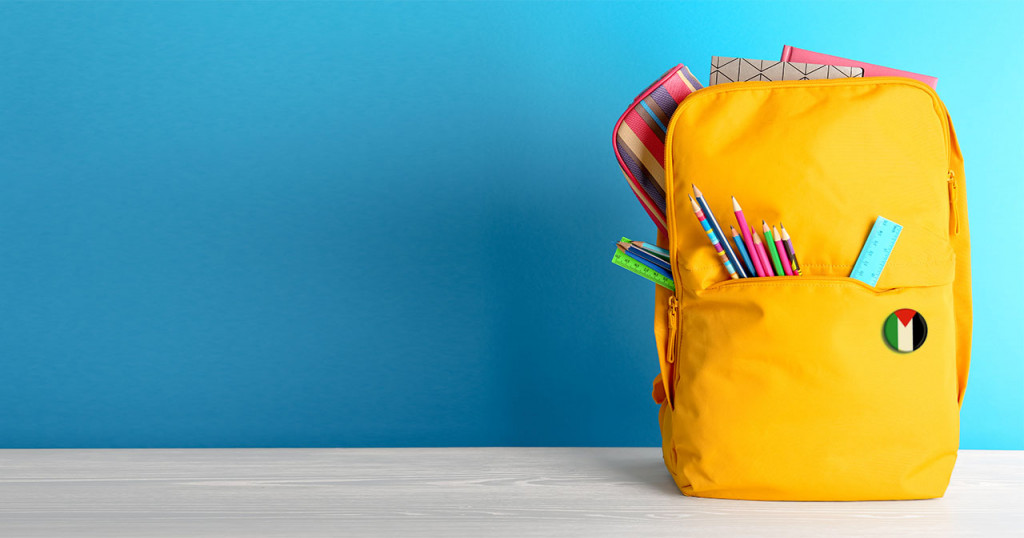 If you ask any teacher working in schools today about why they entered the teaching profession, the response will revolve around the opportunity to enable young people to reach their full potential, or the ability to make a positive difference to the lives of others. You will not find a single response stating that they entered teaching to reinforce structural racism and systemic unconscious bias.

But this is the power of the conditioning that teachers have been subject to within a hostile discourse that problematises Muslimness. Since 2015, the Prevent Duty – through a combination of statutory training, PowerPoints, videos, and speakers – has viewed the Muslim identity through a lens of suspicion and denied Muslim subjectivity. There has been almost a missionary vigour in disciplining expressions of Muslimness based on a white Western Eurocentric vision of the world. The result is that educated professionals, dedicated to the well-being of young people, are taking the most bizarre punitive actions against the very young people under their care.

Without a shadow of a doubt, there has been exaggeration and misrepresentation of incidents that are simple cases of misbehaviour in schools. In a highly charged atmosphere, it is very easy to make unfounded allegations of anti-Muslim or anti-Palestinian hate. The emerging picture across the country, however, is of school after school imposing serious sanctions on students to neutralise any expression of humanity for the suffering in Palestine.

Here lies the essential contradiction of the education system: on the one hand, young people are taught to be critical thinkers, while on the other hand teachers and governors are indoctrinated into the Prevent programme and the assumptions associated with it. A programme which effectively endorses racist stereotyping by using religious and political markers (such as sympathy with the Palestinian cause) as an indicator for potential to commit politically motivated violence. It is staggering that young people who have been genuinely moved by the atrocities committed in Gaza, including the death of 66 children would now be securitised through Prevent referrals. Consider for a moment that Prevent champions itself to be in the pre-criminal space. A Prevent referral is a record that stays for life. Are we now going to take some of the brightest and ideals-driven young minds in our country and put them in a pre-criminal space with a record for life?!

Some schools have chosen to supress expressions of solidarity with the Palestinian humanitarian crisis with formal exclusions. Any young person who is sent home during timetabled school hours for what is perceived to be an infringement of school policy has been formally excluded. A school may not formally call it an exclusion but that’s exactly what it is. This needs to be challenged by parents. A formal exclusion is a permanent record on the student’s file which will undoubtedly impact their future prospects. Parents must realise that formal exclusions can be challenged. In fact, the conduct of any member of the school body can be challenged through the school’s complaints policy. There is a statutory requirement for the school complaints policy to be published on the school website and parents should consider initiating this process. The process will usually start with a parental phone call to school and can escalate to a formal written complaint to the school governing body. This is an important safeguard when the complaint is against the school headteacher. The governing board is composed of school staff and leaders but also members of the local authority and representatives from the local parent body and community, giving a broader and more balanced perspective.

Schools themselves must also realise that a formal exclusion can be challenged under the Equalities Act 2010 and challenges of this nature are long, arduous, and painful. Every element of the school process will be scrutinised through a legal lens, with solicitors sometimes being involved. Was the alleged incident formally investigated? Were statements taken from unbiased witnesses? Are these statements signed and dated? Was the alleged incident something that is expressly prohibited according to the school policies? Is there a compelling context which explains the alleged behaviour of the students? All these questions – and more – will be asked, and in my experience, a large portion of these formal exclusions are knee-jerk over-reactions carried out by ill-informed school leaders conflating anti-semitism with solidarity with the Palestinian humanitarian suffering.

A tremendous amount of time and effort has been invested – and rightly so – in educating students on the horrors of anti-semitism, namely through holocaust remembrance. We cannot however ignore the fact that Zionist lobby groups have attempted to use the anti-semitism slur to silence any critic of Israel. There are a number of prominent organisations and intellectuals in the Jewish community that have actively spoken out against the savagery of the Israeli Defense Force, illegal settlers, and far-right supremacists in Israel. B’Tselem[1], a Jewish Human Rights group, has published a scathing report on the human rights abuses committed by Israel describing it as a ‘regime of Jewish supremacy from the Jordan River to the Mediterranean Sea: This is apartheid’. Renowned Israeli historian Ilan Pappe has written extensively on this subject with his famous work ‘The Ethnic Cleansing of Palestine’[2].

“Laws, policies, and statements by leading Israeli officials make plain that the objective of maintaining Jewish Israeli control over demographics, political power, and land has long guided government policy. In pursuit of this goal, authorities have dispossessed, confined, forcibly separated, and subjugated Palestinians by virtue of their identity to varying degrees of intensity. In certain areas, as described in this report, these deprivations are so severe that they amount to the crimes against humanity of apartheid and persecution”.

Consider for a moment the turbulent journey of a typical Year 11 student who is due to complete their secondary education this summer. They have faced major disruption to their educational and emotional development with two prolonged lockdowns. They have faced the uncertainty of centre assessed grades (CAGs) where the final grade they receive will be largely based on teacher judgement not public examinations – a methodology shown to disadvantage students from black and minority ethnic backgrounds.[3] During their early school career, they have undergone what can only be described as a witch-hunt by Ofsted during a concentrated period in 2018 of no-notice inspections in areas of high concentration of Muslim students. These inspections often involved groups of students being removed from class and interrogated about their beliefs and allegiance to an iteration of British values decided by the Home Office. And to top this all off, they have seen the most graphic real-time images of children buried alive in collapsed tower blocks and hospitals in Gaza. After going through all this, they are being problematised based on their integrity in acting in accordance with their conscience.

We are living in unprecedented times where the systematic privileges and religious stereotyping that underpins structural racism in both society and the education system is being challenged vigorously. Convulsions are occurring across society, as vested interests are swept aside and young people are becoming more vocal in their demands for justice. The stranglehold that the pro-Zionist lobby exerts on major media outlets is becoming less effective in controlling the narrative with young people consuming images in real-time from the front lines of Gaza.

It is important that schools recognise this and understand that an authoritarian approach which attempts to shut down dialogue and smear solidarity with Palestine as an expression of anti-semitism will simply not work. On the contrary, it will inflame the situation. Young people need safe spaces to process and express the images they are seeing. They need an outlet to express their solidarity with the humanitarian suffering in Palestine. They need political avenues to express their discontent at the savagery of Israel and the complicity of both Western and Arab states. School leaders must come to terms with this. Good practice has been seen across many schools in the country where uniform rules have been temporarily relaxed to allow students to wear the Palestinian flag as a badge or painted onto face masks. Organised demonstrations in schools have been seen with students being allowed to vocalise their support for Palestine in a controlled environment. Some schools have recognised the importance of parents being part of the conversation and have advised families to join safe and organised rallies outside school in support of Palestine. Many students have been encouraged by schools to write to their local MPs and collect signatures for petitions. The approach in these schools have been one of hearing the voices of young people, respecting their opinions, and providing a safe space for them to be expressed.

This is how we can help create a generation of conscientious people on the right side of history, who practice what they preach.

If your school has attempted to restrict pupils’ rights to speak out, you can contact these organisations for assistance and free advice:

CAGE is offering FREE advice and support to any parent who is concerned that their child may be referred to PREVENT for speaking up for Palestine in their school. Call the CAGE helpline on 0300 030 2243 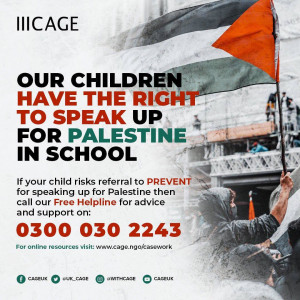