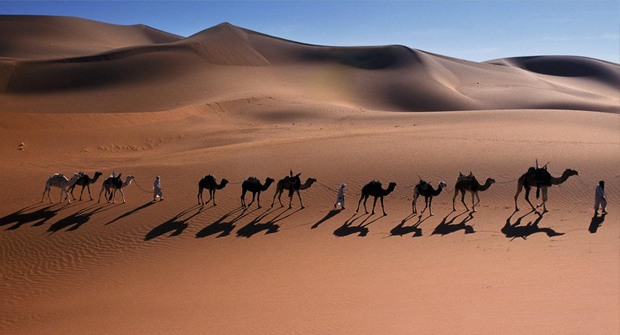 “We were a people of Jahiliyyah, worshipping idols, eating the flesh of dead animals, committing abominations, neglecting our relatives, doing evil to our neighbours and the strong among us would oppress the weak…”1

This was the ambassadorial address of Ja’far Ibn Abi Talib to the Negus of Abyssinia, describing the days of ignorance before Islam: the Jahiliyyah.2 In regards to the aforementioned quote, one would probably claim that the Qur’an adopted a culture of rejection to pre-Islamic customs. However, on close investigation of the topic in a wider sense, it becomes apparent in fact that the Quran’s attitude to society and customs varies from outright rejection to adaptations and modifications on different levels. In the following article, I aim to outline that it would be more accurate to describe the Quran’s attitude to pre-Islamic Arabia as one of transformation and reform combined with the goal of restoration to the original Pre-Islamic way of the Arabs; the way of their ancestor Ibrahim (Abraham).

To begin, let us first examine the dominating theme of the Qur’an from which any further attitudes can be grasped; the theme of Tawhid (Islamic monotheism). The Qur’anic message is clear: it is to this purpose that mankind was created and to its propagation the Prophet Muhammad sent:3

And I have not created man and Jinn for any other purpose but to worship me (alone).4

What is crucial about Tawhid in the context of this essay is that monotheism was in fact no stranger in Arabia. William Muir writes that knowledge of the Abrahamic roots of Makkah and the Ka’bah was widely accepted long before the coming of Muhammad5. Michael Cook quotes Islamic traditions in depicting this narrative with the story of Ibrahim and Isma’il and their establishing of the holy sanctuary for the One God. Thus, the Arabs ‘inherited from their ancestors a monotheist faith and sanctuary’, but through the lapse of time and increased contact with the ideas of the outside world, Arab society fell into the practice of idolatry. The resulting scene was a society deeply engrossed in polytheism and superstitions, awaiting the coming of a Prophet who can be seen to be a ‘messenger sent to restore’ the Arabian birthright of monotheism6, an answer from God to the call of Ibrahim to ‘send among them a messenger of their own’ 7. It is no surprise then that the Qur’an praises Ibrahim on numerous accounts as a model for the Arabs. One particular verse of interest describes Ibrahim as the ‘hanif’, a believer in pure monotheism8  and abstainer from ‘shirk’ (polytheism), while commanding the Messenger, and to an extent all man, to follow this same path.9

So far, all of this may seem irrelevant to the title at hand. However, we will realize it – through the course of this essay – to be central to our discussion as, in short, this message would be pivotal in the shaping of the Quran’s attitude to Pre-Islamic Arabia.

The most obvious of these features of the Jahili society was shirk, namely idolatry, which despite being considered a theology, cannot be secluded from the social analysis of Jahiliyyah. In fact it was very much included, and determined various norms and customs of the Arabs, the Ka’bah and Hajj being two of the most obvious symbols. It influenced Arab life from illness to journeys to battles.10 Thus, shirk, being in direct conflict with Tawhid, was explicitly rejected and received the harshest of treatments. In the Qur’an it has been unsurprisingly ranked as the most heinous of sins, unforgivable should the perpetrator die upon it11, and hence, is dealt with the sentence of eternal Hell.12

Muhammad (peace be upon him) himself exemplified this rejection of polytheism in a symbolic event that was to mark the demise of shirk in Makkah with the destruction of 360 idols that were housed in the Ka’bah at the conquest of Makkah. Then, after his own Tawaf (circumambulation) of the sanctuary, he noticed images of Ibrahim and Ismail throwing ‘divination arrows’ and likewise ordered that all images be removed.13 Other polytheistic practices of Jahiliyyah equally received similar treatment. The Arabs were known to be extremely immersed in superstitious beliefs and activities, and these formed a large part of how society ran; Tatayyur (belief in omens), Tanjeem (astrology), Tabarruk (seeking blessing from objects) and Kahanah (soothsaying), were just a few, and were strongly rejected by Islam.14 It is therefore apparent that the aspect of Jahiliyyah most deviated from Ibrahim’s Hanifiyyah, polytheism, received the severest penalty of rejection. However, less religious aspects of society were also dismissed. The custom of burying young daughters alive was one particularly rejected in the Qur’an during the early stages of Muhammad’s prophethood.15 The contemporary Hasan Al-Banna, portrays a Jahiliyyah where such social and moral ills were rampant, which would mean that the Quran’s condemnation would encompass the society as a whole. However, Bashier disagrees with this view, explaining that these customs, although prevalent, were not adopted by all. The late Safi-ur Rahman Al-Mubarakpuri also holds this view, and further attributes their actions to the ‘imaginary fear of poverty and shame weighed heavily on them.’16 This is attested to in the Quran and is clearly rejected:

And do not kill your children for fear of poverty. We provide for them and for you.4

…He hides himself from the people because of the evil of that whereof he has been informed. Shall he keep her with honour or bury her in the earth? Certainly, evil is their decision.4

Even though this denunciation would fall squarely on those that practiced such customs, Banna’s view can be reconciled with that of Bashier’s; as all acknowledged and tolerated these customs, so all deserved criticism. The same can be said for the many other traditions that existed at the time.

Tolerance in Jahiliyyah was also shown to practices of zina (fornication/adultery). According to Muhammad Ali, women were often viewed as ‘a mere chattel’19, while prostitution and other sexual customs were recognized and accepted in the crudest of forms20. Although all types of zina were rejected generally in the Qur’an, others were specifically rebuked in the Qur’an such as the forcing of handmaids to prostitute in order to provide capital for their owners21, and the marrying of close relations.22

While we can continue to explore those aspects of Jahiliyyah that were wholly rejected, there were features of Pre-Islamic Arabia that were reshaped to fit the new era. The Hajj would be the foremost example in this category. The Islamic version continued many of the rites of the Hajj of Jahiliyyah, with the tawaf being perhaps the most obvious, as well as the timing of the Hajj season. In brief, the Hajj was one of the practices that survived into Islam in ‘revalorized form’23, according to Jonathan Berkey. The justification is noted in the Quran24; Hajj was a pilgrimage ordained by God to the House of God and is to be restored to its Abrahamic roots. Despite these continuations, certain aspects were rejected such as that of the method of prayer through ‘whistling and clapping’25, the Tawaf around the sanctuary naked26, and of course, the idolatry, as Muir summarizes it: “The rites of the Kaaba were retained, but stripped of all idolatrous tendencies”27 (this would also apply to other forms of worship such as the making of the Qasam (oath) or Nadhr (vow). Originally made in the name of an idol, now it was only to be used in the name of Allah28).

Not only was the sanctity of the Ka’bah vicinity upheld, the holy months in general survived with a slight modification. Fighting in these months was condemned universally in Jahiliyyah, which the Quran does not dispute: “Say: fighting therein is a great (transgression)…” However, in the context of a strategic military move by some Muslims that allegedly broke this tradition, the verse continues to introduce the new law: “…but a greater (transgression) with Allâh is to prevent mankind from following the Way of Allâh, to disbelieve in Him, to prevent access to Al-Masjid-al-Harâm (at Makkah), and to drive out its inhabitants, and Al-Fitnah is worse than killing.”

Fighting in Jahiliyyah was not rare. Earlier, Muhammad Ali painted a picture of Jahiliyyah indulged in zina. This portrayal is challenged by Mubarakpuri who excludes the upper-class woman from this representation, but nevertheless points out another problem; she was so ‘highly cherished’ that wars would be fought as a result. This was just one aspect of the social and political strife that existed. Arabia was a highly tribal land governed by tribal politics29. It is true that the Qur’an denounced blood ties in favour of those of faith, thus ‘achieving the impossible….the union of these warring faction’30 with the concept of Islamic brotherhood. Nevertheless, the tribal practice continued for several generations after Islam31 and was commended within the circle of faith:

…We have created you as tribes and nations so that you may know one another. Verily, the most noble of you to God is the most pious of you…4

There were, however, elements of Pre-Islamic Arabia that were fully adopted and to an extent praised in Islam. Bashier closely examines the Pre-Islamic Arabian in two conflicting lights: his morality and his demeanour. While the former has already been dismissed as a large component of the Jahiliyyah term, the latter doesn’t appear to be a part of it at all. The Arabs were highly extolled for their muruwwah (chivalry), encompassing honour and hospitality amongst other traits33. They would often ‘kill their last sheep or goat to entertain their guests’34, and this hospitality has been praised in the Qur’an as the way of Ibrahim himself when angels visited him35. Moreover, admiration for those characteristics was expressed by the Prophet who wished that those still in Jahiliyyah carrying those qualities would enter Islam with them, as it became so with the likes of Hamza ibn Abdul Mutallib and Umar ibn Al Khattab.36

As for the language and poetry of the Arabs, then much can be learnt from the fact that the Quran describes itself as an “Arabic Quran”37, revealed in the “plain Arabic language”38 that challenges the linguistically boastful nation to produce verses like it. The Qur’an itself was a spectacle of words, in a period that Arabian idioms and poetry were celebrated as a core cultural component39 at its ‘zenith’40, the Mu’allaqaat at the ka’bah being evidence for that41. Although poetry of ill nature, such as those used to attack Islam was rejected42, poetry itself was not, and was employed by the Prophet (peace be upon him) himself through a versifier, Hassan ibn Thaabit, to combat the opposition in a battle of words.

In conclusion, the Qur’an does indeed wholly reject various religious elements of Pre-Islamic Arabia such as its idolatrous practices and superstitions, as well as social customs like those of burying daughters alive. While not wholly rejecting other features, modifications were made as is the case with the Hajj to return it to its monotheistic roots. In fact, Islam even went as far as to adopt just and commendable aspects of Pre-Islamic Arabia such as its qualities of muruwwah, repainting Arabia with its own just elements while erasing the oppressive ones. These stances of rejection and modification add up to create an attitude of change, or more accurately, reformation and restoration if we view Pre-Islamic Arabia in the light of its Abrahamic roots. Thus, the Qur’an’s approach was not to conjure a new Arabia, but rather, to recreate the original one.