Muslims should be the Conscience of Britain 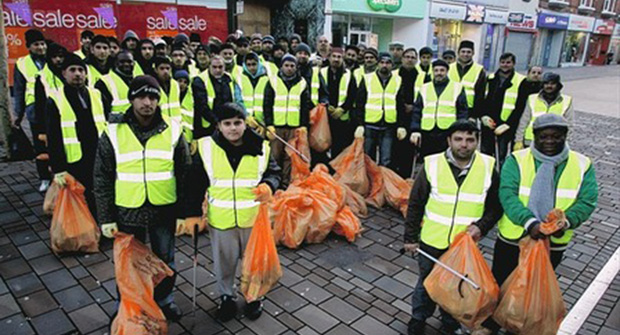 Debates abound as to the position of Muslims in British society. What is their role in society and what should it be? How are they perceived by others? More importantly, how are they perceived by themselves? What should the relationship be between Muslims and wider society?  How are Muslims to be integrated into mainstream British life, if at all?  There are ministers entrusted with addressing these questions. There are think-tanks and focus groups that are allocated funds to deal with ‘the Muslim challenge’.

As we all try to wrestle with these issues, we are faced with the current reality of Muslims. Socially, we are a diverse people and at the worst end of the spectrum there is a sector of Muslims that are dysfunctional, with little to offer to society, and at times contributing to its disruption.  As a community, we lack a unified vision. Like a rudderless boat, we do not know which way we are heading but are allowing unfavourable winds to take us further away from our destination. In being extraneously directed in how to think, we have effectively become, or allowed ourselves to become,  a subservient community that is not respected by its government that allows a lower standard of respect for itself than is granted to others. The decisions and actions that should be taken from within Islam are being forced upon it from without, often in the name of combating terrorism or extremism.

How does this reality compare with what is expected of them from their faith.  Allah has given us an honoured position, but this position brings with it responsibility, and we have to live up to this responsibility. Do the Muslims collectively even approach the description given to them by Allah?

“You are the best nation produced [as an example] for mankind. You enjoin what is right and forbid what is wrong and believe in Allah “. [1]

Muslim leaders – the imams, the scholars, the heads of organisations – seem to have failed to link the Muslims with this responsibility. All too often blemished by sectarian prejudices, personal interests, or lack of initiative, they have provided British Muslims with neither a vision nor direction. This may be in part because they too have become a victim of a subservient mindset. Many ‘leaders’ have lost the ability to lead.

We need to turn to the Qur’an for it to give our community its lifeblood and sense of purpose, for the answers to the questions about our role in society are present for us in the Qur’an. There is a job description of Muslims in society that is outlined in the Words of Allah and in the life and teachings of the Prophets.  All through the Qur’an Allah informs us of the missions of the Prophets, how they sought to correct society, how they were opposed and how they dealt with such opposition. These accounts are not mere stories – they are lessons that carry instructions, some explicit and some derived. How do we apply these stories to our lives in UK?

All prophets called primarily to the worship of Allah in his oneness, to right social ills, and address the wrongs that had taken hold in society – the status quo that defined that society.  Ideologically, the status quo of our time is secularism and atheism, and from a moral standpoint, it is one of materialism and liberalism that at times borders on hedonism. By virtue of living in the midst of this society we have an automatic responsibility towards it, just as the Prophets had a responsibility towards theirs.

So let us take these Prophets as our models. They and their followers were a small minority just as Muslims in the UK today are a minority. Our role model should be Noah (peace be upon him) who called tirelessly to the worship of Allah saying, “O my Lord! I have called to my People night and day” [2]

Let our role model be Abraham, the iconoclast, who stood alone with courage against the worship of false Gods, “(Abraham) said, “Do ye then worship, besides Allah, things that can neither be of any good to you nor do you harm?”Fie upon you, and upon the things that ye worship besides Allah. Have ye no sense?” [3]

In addressing  those who pride themselves in sexual gratification outside what Allah has created for them , let our example be that of Lot (peace be upon him) who tried to appeal to his errant nation’s sense of morality,  “and [thus, too, did We save] Lot, when he said unto his people: “Would you commit this abomination with your eyes open (to its being against all nature)? -Must you really approach men with lust instead of women? Nay, but you are people without any awareness (of right and wrong)!” [4]

In taking to account the banks and big businesses that have amassed billions and have enslaved people through interest into a system of modern day fiefdoms, let our role model be Shoaib, who took his people to account for their greed and avarice that made them economically corrupt, “to the people of Midian We sent Shu’aib, one of their own brethren: he said: “O my people! Worship Allah. Ye have no other god but Him. Now hath come unto you a clear (Sign) from your Lord! Give just measure and weight, nor withhold from the people the things that are their due; and do no mischief on the earth after it has been set in order: that will be best for you, if ye have Faith.” [5]

To those in Government who are inclined to waging unjust wars and oppressing other nations let us say what was said by Saalih, “And do ye get for yourselves fine buildings in the hope of living therein (for ever)? And when ye exert your strong hand, do ye do it like men of absolute power?” [6]

Let us take the lessons from the story of Moses that is repeated over and over again – standing up to tyranny on behalf of the weak, intellectually challenging those who disbelieve, and bearing patiently the rejection of the mighty, and the stubbornness of his mentally enslaved kinsfolk. And above all, let our model be our Prophet Muhammad (peace be upon him), and let our call to the people of Britain be that there is no God except Allah, and Muhammed is the messenger of Allah.

Let our example be that of the Noble Prophet when he stood upon Mount Safa and proclaimed: “I am a warner to all of you before a severe punishment”. Let us be the helpers of the oppressed and the poor and the weakest of society – let us remind people to join the ties of kinship, and be kind to the neighbour and the refugee.

Those were the (prophets) who received Allah’s guidance: Copy the guidance they received; Say: “No reward for this do I ask of you: This is no less than a message for the nations.” [7]

In these lessons lie the answers to the question: ‘What is a Muslim’s role in society?’ The Muslims are not an enemy nor a fifth column. We are not just a minority that has to assimilate into society on governmental orders. Rather, we are a group of believers following in the footsteps of the Prophets of Allah. An ideal Muslim seeking the pleasure of Allah is the one who would be more sincere to his nation than a hundred elected MPs that the millions have voted for. Let us be like the Messenger, who said:

“My example and yours is like a man who kindles a fire. Suddenly grasshoppers and moths begin to fall in it and the man tries to push them away. (Similarly) I am (trying) to hold you by your waists from the fire but you are slipping away from my hands.” [8]

Furthermore, we need to know that our safety and security is from Allah and we will not deserve it unless we are Muslihoon – those who rectify the affairs around them. Our continued existence depends on our fulfilling our duty of Islaah.The Muslim community should be the conscience of Britain.

We have many challenges before us. For all the ills of society that we see before us, we also have the onerous task of having to deal with our own disordered house. In our own backyards we have tremendous challenges of crime, under achievement and a Muslim community that is so dogged-down by the rigours of day to day living that it has lost its aim. This compounds the task of the Muslim. So like Moses we are before a sea of inequity and godlessness in need of faith – and our deficient people behind us – divided, ill-informed and weak. But as Moses we must march ahead, saying, “By no means! My Lord is with me and He shall guide me!” [9]