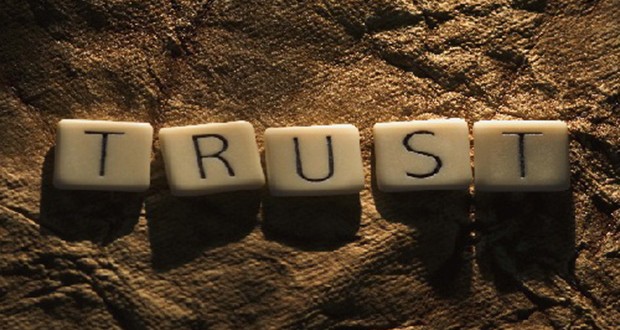 Allāh, Exalted is He says,

“Allāh commands you to return the things you hold on trust to their owners”;

“If you leave things on trust with one another the one who is trusted must deliver up his trust.”

“You who have faith! Do not betray Allāh and His Messenger and do not knowingly betray your trusts.”

“It is the believers who are successful, …., those who honour their trusts and their contracts… such people are the inheritors, who will inherit Firdaws, remaining in it timelessly, forever.”

“We offered the Trust to the heavens, the earth, and the mountains but they refused to take it on and shrank from it. But man took it on, he is indeed wrongdoing and ignorant.”

The trust (amānah) referred to in this last verse, the verse of Sūrah al-Aĥzāb, refers to the fulfilment of the laws that Allāh has revealed. These laws have been referred to as a trust to stress the fact that the undertaking of obeying Allāh was something freely taken on by man, without any coercion, and that he now has a duty of discharging that trust.[1] Ibn `Abbās said that ‘the Trust’ referred to the obligations.[2] As such the meaning of fulfilling trusts is general to discharging our duties to Allāh, the Muslims, and His creation.[3]

al-Kafawī said, ‘Everything that Allāh has obligated upon His servants is an amānah, such as: ŝalāh, zakāt, ŝiyām, and repaying debts. The most stressed for of amānah is those things another entrusts one with, and the most stressed form of these is another’s secrets.’[4]

Amānah is the mannerism of the Prophets and Messengers. In Sūrah ash-Shu`arā´ Allāh, Exalted is He, informs us that Nūĥ, Hūd, Ŝaliĥ, Lūţ and Shu`ayb all said, “I am to you a trustworthy Messenger.” The Messenger of Allāh (peace be upon him) was known amongst his people, both before and after his being entrusted with the Message, as al-Amīn (the Trustworthy One). al-Miswarah bin Makhramah said, ‘I asked Abū Jahl, my uncle, “Uncle, did you ever accuse Muĥammad of lying before he came with his message?” her replied, “Son of my sister, by Allāh, while he was yet young, Muĥammad would be called al-Amīn (the Trustworthy One) by us. Even when his hair started turning white, he would still not lie.” I asked, “Uncle of mine, so why don’t you follow him?” He replied, “Son of my sister, we and Banū Hāshim were always competing with each other for nobility, they fed people and so we did too, they gave others drink and so we did too, they granted protection and so we did too. We’ve kept pace with each other like two race-horses, then they said, ‘A Prophet has arisen from us’, how could we possibly compete in this?” ‘[5]

There are numerous aĥādīth stressing the importance of amānah, amongst which are:

1. Bukhārī and Muslim record on the authority of Abū Hurayrah that the Messenger of Allāh (peace be upon him) said, “The signs of the hypocrite are three: when he speaks he lies; when he makes an oath he breaks it; and when he is entrusted with something he betrays that trust.” The version of Muslim has the additional wording, “Even if he fasts, prays and thinks that he is a Muslim.”

2. Aĥmad [#12384] records that Anas that the Messenger of Allāh (peace be upon him) said, “There is no faith for the one who has no amānah and no religion for the one who does not keep his promises.”

A similar wording is recorded by al-Bayhaqī [#5256] on the authority of Thawbān that the Messenger of Allāh (peace be upon him) said, “There is no faith for the one who has no amānah and there is no prayer for the one who is not in wudū´.”

al-Munāwī, may Allāh have mercy upon him said, ‘Amānah is the core of faith and its position is that of the heart to the body. Amānah is to be found in seven limbs: the eyes, ears, tongue, hand, foot, stomach, and the private parts. Whoever leaves off fulfilling the amānah of any of these limbs, his faith will be sullied, and whoever leaves off the amānah of all of them, he will leave the circle of faith.’[6]

It is in this light that `Umar would say, ‘The one who has no amānah is devoid of religion.’[7]

The Salaf would look to a person’s amānah and truthfulness as a indication of his religiosity rather than his prayer and fasting. Ibn `Umar would say, ‘Do not look to the prayer of anyone, nor his fasting, but look to the truthfulness of his speech when he talks, his fulfilment of trusts when he is entrusted, and his scrupulousness when he is given a position of responsibility. ‘[8]

3. al-Ĥakīm at-Tirmidhī records on the authority of Zayd bin Thābit that the Messenger of Allāh (peace be upon him) said, “The first thing to be lifted from this nation will be trust (amānah), and the last thing to remain of their religion will be the prayer, and it is possible that one praying have no lot with Allāh, Exalted is He.”

at-Ţabarānī records on the authority of Anas that the Messenger of Allāh (peace be upon him) said, “The first thing you will lose of your religion is amānah. There is no religion for the one who has no amānah and no amānah for the one who does not keep his promises, and keeping promises well is from faith.”

4. Bayhaqi, Shu`ab al-Īmān [#5252] records on the authority of Abū Hurayrah (RA) that the Messenger of Allāh (peace be upon him) said, “Discharge the trust to those who entrust you and do not act treacherously to those who act so with you.”

5. Ibn Ĥibbān records on the authority of `Ubādah bin as-Ŝāmit that the Messenger of Allāh (peace be upon him) said, “Guarantee me six and I will guarantee you Paradise: be truthful when you speak; fulfil your promises; carry out what you are entrusted with; safeguard your private parts; lower your gaze; and restrain your hands.”

Fudayl bin `Ayād said, ‘The foundation of faith in our view, after the testification of Tawĥīd and after attesting that the Prophet (peace be upon him) conveyed the message and after the performance of the obligations, is: being truthful in speech; preserving the trusts; leaving off treachery; fulfilling promises; joining the ties of kinship; and giving sincere advice to all the Muslims.’[9]

6. at-Tirmidhī records on the authority of Abū Hurayrah that the Messenger of Allāh (peace be upon him) said, “The Muslim is one from whose tongue and hand the Muslims are safe. The believer is one to whom the people would entrust their blood and property.”

7. at-Tirmidhī records on the authority of Jābir bin `Abdullāh that the Messenger of Allāh (peace be upon him) said, “When a person speaks, then turns [left and right], that speech becomes an amānah.”

Meaning that his speech has the ruling of an amānah and as such it is not permissible to spread it and broadcast it. Ibn Raslān said, ‘This is because his looking around serves to alert the person he is speaking to that he fears that another may hear what he is saying and that these words are for the listener only.’ al-`Alqamī said, ‘Meaning that when someone says something to you and then goes away, his speech becomes an amānah and it is not permissible for you to spread it.’ Hence he understands the turning mentioned in the ĥadīth to mean going away but the first possibility is the obvious one.[10] The generality of this ĥadīth finds specificity in the ĥadīth of Jābir recorded by Abū Dāwūd that the Messenger of Allāh (peace be upon him) said, “Gatherings are an amānah except for three: those for the purpose of shedding blood unlawfully; or committing fornication; or acquiring property unjustly.”[11]

And we are taught that the lack of amānah would be the feature of later times,

Notes:
Sources:www.islam21c.com
Islam21c requests all the readers of this article, and others, to share it on your facebook, twitter, and other platforms to further spread our efforts.

Previous: Condolences to Shaikh Ahmad Ali and His Family
Next: What is an Islamic Education? The Shaping of Tomorrow’s Vicegerents Today