Behind closed doors: “It’s my life, and I’ll sin if I want to” 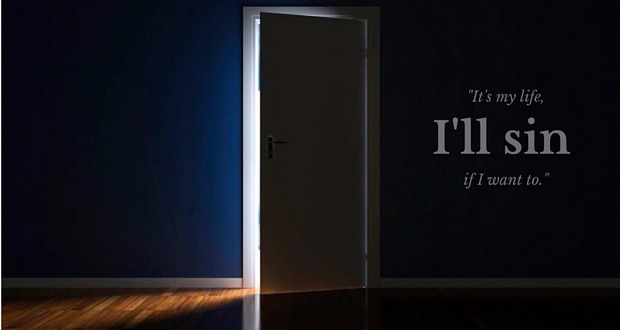 “Allāh commands you to restore the trusts to their owners and when you judge between people to judge with justice. Excellent is that which Allāh instructs you. Indeed, Allāh is ever Hearing and Seeing.”

The Prophet (sall Allāhu ʿalayhi wa sallam) came out of the Kaʿba as he recited this Āyah and asked, “Where is ʿUthmān b. Talha?” He then said to him, “Take the keys back, for this is a day of righteousness and loyalty” The Prophet (sall Allāhu ʿalayhi wa sallam) also instructed that the possession of the keys to the Kaʿba must remain with him and his progeny until the end of time.

This was yet another one of the episodes of Amānah (Trustworthiness) in the life of our messenger (sall Allāhu ʿalayhi wa sallam). Not only had he lived as an Amīn (Trustworthy character) and called others towards this trait, but he also warned his people that its disappearance from amidst the Muslims would indicate that the Hour is near. Abū Huraira says:

While the Prophet was saying something in a gathering, a Bedouin came and asked him, “When would the hour take place?” Allāh’s Prophet (sall Allāhu ʿalayhi wa sallam) continued his talk, so some people said that he had heard the question but did not like what that Bedouin had asked. Some of them said that he had not heard it. When the Prophet (sall Allāhu ʿalayhi wa sallam) finished his speech, he said, “Where is the questioner, who enquired about the hour?” the Bedouin said, “Here I am, O messenger of Allāh” then the Prophet said, “When honesty is lost, then wait for the hour.“[1]

The nature of Amānah

The nature of Amānah is so imposing that the heavens, the earth and the mountains fear it. Allāh says,

“We offered the Trust to the heavens and the earth and the mountains, and they declined to bear it and feared it; but man accepted to bear it. Indeed, he was unjust and ignorant.”

“Al-Amānah is in reference to the Dīn of Islām, for the entirety of our Dīn is an Amānah”

Contrary to common assumption, ‘trustworthiness’ is not merely about being entrusted with money or belongings, but its meaning extends much further than that. Ar-Razi says

“The dealings of people are either with Allāh or with other people or with themselves, and it is incumbent that Amānah is observed in all three of these areas of dealing.”[2]

Considering this, Amānah is, therefore, far wider in its meanings then what we could have imagined. It exists and takes precedence in all aspects of life. What follows are exemplar scenarios of the importance of Amānah and its role in our lives.

1) The employees who work for you are an Amānah which you shall be asked about.

The Prophet (sall Allāhu ʿalayhi wa sallam) is reported to have said,

“Give the employee his wages before his sweat dries.”[3]

2) Your family are an Amānah which you shall be asked about.

“O you who believe! Protect yourselves and your families from a fire whose fuel is men and stones”[4]

3) Your husband is an Amānah which you shall be asked about.

“Any woman who dies whilst her husband is pleased with her will enter Jannah.”[5]

4) The private affairs between husband and wife are an Amānah.

It was narrated that one of our predecessors was on the verge of divorcing his wife. He was asked, “Why do you wish to do so?” He responded, “A wise person never uncovers the secrets of his wife.” When he eventually divorced her, he was approached once again and asked, “Why did you divorce her?” He responded, “Why are you asking me about somebody else’s wife?”

5) Your time is an Amānah which you shall be asked about.

Allāh (subḥānahu wa taʿālā) will say to the people of the fire as they beg for a second chance:

“Did We not give you lives long enough, so that whosoever would receive admonition could receive it?”[6]

6) Your desires and private parts are an Amānah about which you will be questioned.

“Allāh (subḥānahu wa taʿālā) created the private parts of man and said: ‘This is an Amānah which I have hidden with you, so guard it except where it is allowed.”[7]

7) The position of influence which you have, whether as an Imām, leader of a Halaqa or internet following, is an Amānah which you shall be asked about.

When the Prophet (sall Allāhu ʿalayhi wa sallam) was asked, “How is Amānah lost?” he responded,

“When the power or authority comes in the hands of unfit persons, then wait for the hour”

The above examples are but a few. To be sure, even the Qur’ān which sits on your shelf; the Salāh you perform at the Masjid, the Islamic Hijāb you don, and the body which Allāh has loaned you are all Amanāt. Thus, we realise just how beautiful Al-Hasan’s definition of Al-Amānah is, when he states, “Al-Amānah is in reference to the Dīn of Islām, for the entirety of our Dīn is an Amānah”

Now, in the 21st century, there is yet another Amānah which is in desperate need of our attention as many Muslims lament their consistent betrayal of this trust. This is the Amānah “access”. Never in history has it been easier to attain Ḥarām behind closed doors than it is today.

With that being said, let us reflect on Allāh’s (subḥānahu wa taʿālā) words,

“O you who have believed, Allāh will surely test you through something of the game (land animal that is hunted for food) that your hands and spears can reach, so that Allāh may make evident those who fear Him in the unseen. And whoever transgresses after that – for him is a painful punishment.”[8]

This āyah highlights a test which a group of the companions were exposed to. They were in Iḥrām (a state of sacred purity taken up during the pilgrimage), carrying out their pilgrimage, in the state of which hunting land animals is forbidden. As they walked in their Iḥrām, the game animal approached them from every direction as a test from Allāh. With minimal effort, they could have dined on the finest, and otherwise most expensive, food, but remarkably, not a single pilgrim did so, despite their poverty and hunger for the most part.

The reason for which Allāh (subḥānahu wa taʿālā) tested with a Fitnah that their “hands could reach” is mentioned in the āyah itself.

“So that Allāh may make evident those who fear Him in the unseen.”[9]

As little as ten years ago, attaining Ḥarām would have been more cumbersome, with greater effort required. Today, however, in the advent of technology and mass communication, the most obscene of scenes can be accessed from one’s home at the click of a button. All one now needs are contact details; an 11 digit number; or simply the social media profile name, and one-to-one private communication can be established at any time and in any place. Never has it been easier to access the many forms of sin from behind closed doors, sins which our hands can easily reach. In the face of this, we pose the same question: Why has Allāh allowed this trial to dawn upon us? And the same answer stands:

“So that Allāh may make evident those who fear Him in the unseen.”[10]

A predecessor of ours once said,

“The fear that filled your heart when the wind moved your curtains as you engaged in the sin is worse than the sin itself”, for Allāh is worthier of that fear.

An individual who was once addicted to scenes of nudity said,

“I heard someone trying to open the door and so my heart reached my throat in fear and I lost my breaths. I quickly turned off the computer and opened the door, and it was a cat”.

Dearest Muslim, beware of being an ally of Allāh in public and an enemy of Allāh in private. Whilst it is true that such a contradiction in the personality of a Muslim may never actually be discovered by people, it can cause major problems on the Day of Judgement. The Prophet (sall Allāhu ʿalayhi wa sallam) said,

“There are a group of people within my Ummah whom I know who will come on the Day of Resurrection with good deeds like mountains, then Allāh (subḥānahu wa taʿālā) will reduce these mountainous deeds to scattered dust.”

Thawbān (raḍiy Allāhu ʿanhu) said, “O Messenger of Allāh! Describe them to us and tell us more about the nature of these people, just in case we become like them whilst we are unaware.”

He clarified, saying, “They are your brothers and they are from your race, worshipping at night as you do, but they are a people who, when they are alone, they transgress the limits of Allāh.”

We must turn this challenge into an opportunity. Having realised that Allāh is testing us with this access we must also realise that the greater risks involved bring with them greater opportunities.

There are three remedies to protecting the Amānah being constantly violated:

1) Remembrance of the fact that Allāh is watching over you

2) Contemplation over the Qur’ān

As for the first remedy – the watchfulness of Allāh – Al-‘Allaama Ash-Shanqeeti would say,

“The scholars are unanimously agreed that Allāh has not brought down any means which is more effective in pushing oneself away from Ḥarām than Murāqaba.”

During those moments, remember that you are being watched by the King, the One who hears and sees the footsteps of the dark ant, during the dark night, as it walks on the dark stone.

As for the second remedy – reading the Qur’ān with contemplation – Imām Ibnu Taymiyyah said,

“Reading the Qur’ān with contemplation over its meanings is one of the most effective means of preventing oneself from sins or at least some of them.”

As for the third remedy – the worship of Allāh in privacy – Imām Ibnul Qayyim said,