Are you ready for our first ever NATIONAL CAMPAIGN?
Home / Current Affairs / Fleeing to prayer during testing times 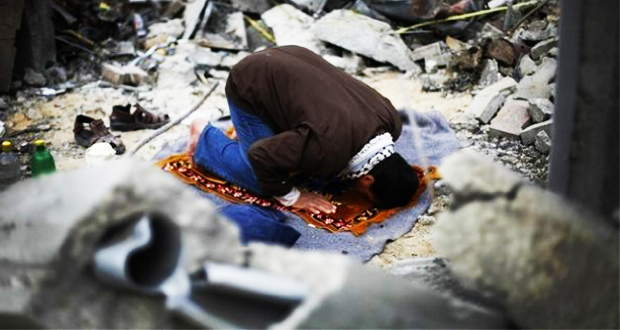 Fleeing to prayer during testing times

The situation of the Ummah today necessitates that we remind ourselves of some important and beneficial reminders that will help us in our situation and relieve us from the resultant grief and concerns that we suffer from. We may also suffer from personal problems that also require a similar remedy. From amongst the legislated ways to repel the negative effects of trials and tribulations is ṣalāh itself.

The Prophets and the righteous understood the huge status of ṣalāh among other acts of worship and so they used to resort to it and what it contains in terms of Qur’ān, dhikr and du’ā when tribulations and tests would befall them. It is authentically reported that Ṣuhaib (radiy Allāhu ‘anhu) said,

“When the Prophet (ṣallAllāhu ‘alayhi wasallam) used to pray he would whisper something we could not hear…and they (i.e. the Prophets) would flee to prayer when they were alarmed or dismayed by something.”[1]

Imām Aḥmad also reported in his Musnad with a good chain of narration that ‘Ali (radiy Allāhu ‘anhu) said on the day of the Battle of Badr,

“I looked at ourselves and saw that everyone was asleep except for the Messenger of Allāh (ṣallAllāhu ‘alayhi wasallam), who was underneath a tree praying and weeping until the morning.”[2]

‘Abdullāh b. Mas’ūd (radiy Allāhu ‘anhu) also narrated that the Prophet (ṣallAllāhu ‘alayhi wasallam) would beseech Allāh (subḥānahu wa ta’ālā) when praying when the two armies clashed during the Battle of Badr,

Imām al-Bukhāri (raḥimahullāh) also reported on the authority of Umm Salamah (radiy Allāhu ‘anha) that, “the Prophet (ṣallAllāhu ‘alayhi wasallam) woke up one night and said, “Glory be to Allāh! What great afflictions have been sent down tonight! What great treasures have been opened up tonight as well! Awaken the women sleeping in these dwellings for perhaps a person who is clothed in this life will be naked in the afterlife.”[4] Ibn Ḥajar (raḥimahullāh) commented upon this narration by saying, “In this narration we learn the recommendation of hastening to prayer when one fears imminent evil just as Allāh (subḥānahu wa ta’ālā) said, “and seek help through ṣabr and prayer.” (2:45) and when the Prophet (ṣallAllāhu ‘alayhi wasallam) became distressed by anything he would hasten to prayer and he would command the one who saw something in their dreams that they disliked, to also pray.”[5]

Moreover, it is reported that ‘Abdullāh b. al-Naḍr (raḥimahullāh) said, “My father mentioned to me that Darkness prevailed in the time of Anas b. Mālik (raḥimahullāh), I came to Anas (radiy Allāhu ‘anhu) and said (to him), “Abū Hamzah! Did anything like this happen to you in the time of the Messenger of Allāh (ṣallAllāhu ‘alayhi wasallam)? He replied, “I seek refuge in Allāh (subḥānahu wa ta’ālā). If the wind blew violently, we would run quickly towards the mosque for fear of the coming of the Day of Judgment.”[6]

It was also reported that while Ibn ‘Abbās (radiy Allāhu ‘anhu) was travelling, news of the death of his brother reached him. He then said, “Indeed we belong to Allāh (subḥānahu wa ta’ālā) and unto Him we shall return” and then took to the side of the road and prayed two units of prayer and then walked over to his riding animal saying, “And seek help in ṣabr and prayer.”[7] It is due to this narration and other similar narrations that Imām al-Ājurri (raḥimahullāh) and other scholars said that it is recommended for someone who has been afflicted with a tribulation to pray two units of prayer.[8]

Therefore, ṣalāh, du’ā and the recitation of the Qur’ān are from the greatest means to remain steadfast during testing times and tribulations. This is because turning to these acts of worship endues a sense of awe and closeness to Allāh (subḥānahu wa ta’ālā) and helps one attain the special care and protection from Him (subḥānahu wa ta’ālā). It is unfortunate though that you will find many people that are heedless of this sunnah and in fact, for many people, prayer is probably the last thing on their minds when they suffer from such tribulations since they feel as though they are not in the “right frame of mind” to pray! If only they would try earnestly to turn to Allāh (subḥānahu wa ta’ālā) they would find something else!

Whether you feel the brunt of the trials and tribulations of the ummah or suffer from your own personal trials, turn to prayer, for you will find a hidden enclave that will shelter you from the difficulties and harms of life. Let us also not forget the powerful tradition of the Prophet (ṣallAllāhu ‘alayhi wasallam),

“Worshiping during the period of widespread turmoil is like emigration towards me.”[9]