The Lion of Dagestan | Imam Shamil 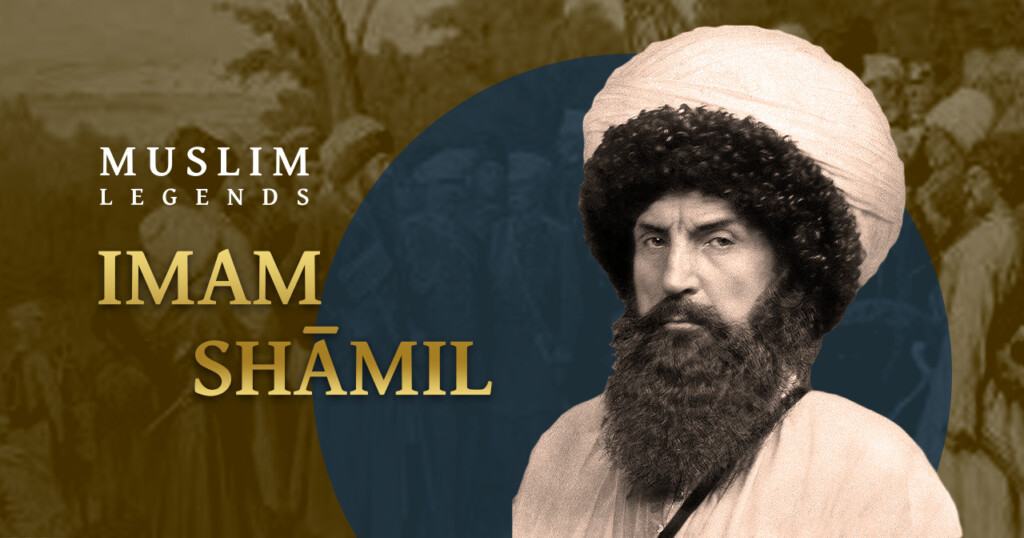 “Then, suddenly, with the spring of a wild beast, he leapt clean over the heads of the very line of soldiers about to fire on him, and landing behind them, whirling his sword in his left hand he cut down three of them, but was bayoneted by the fourth, the steel plunging deep into his chest. His face still extraordinary in its immobility, he seized the bayonet, pulled it out of his own flesh, cut down the man and, with another superhuman leap, cleared the wall and vanished into the darkness” [1]

– Russian officer during the Battle of Gimry

Islamic history is full of many great men and women who excelled in all aspects of human activity – theologians, philosophers, mathematicians, scientists, and more. There were also those who resisted and fought against oppression, defying all the odds to uphold the honour and dignity of the Ummah for the sake of Allāh. Before UFC champion Khabib Nurmagomedov claimed the title of the ‘Lion and Eagle of Dagestan’, there was one particular man whose legacy still resonates across the Caucasus region – a man who was greater and much more powerful in rank. Through his revolutionary fervour and embodiment of the Qur’ān, this man played a pivotal role in the revival of Islam in this region at a time when the super-power of the day was sweeping across the land. The name of this giant was Imam Shamil, leader of the Dagestani and Chechen tribes of the North Caucasus, who spearheaded 25 years of fierce anti-Russian resistance.

Imam Shamil was born in 1797 to an ethnically Avar Muslim family in a small district known as Gimry in modern-day Dagestan. He was born at a time when the Russian Empire was rapidly swallowing Ottoman and Persian territories in the North Caucasus. When he was born, Imam Shamil was given the name Ali. Following local tradition, he was renamed Shamil during his childhood illness, with the hope that his new name would grant him good health. Shamil was an extremely frail and weak child, but his character was shaped by the rough terrain, and he was toughened by a tradition of a stoic and fatalistic lifestyle.

As a child, Shamil was taught grammar, logic, rhetoric, and Arabic. He was set apart from the rest of his friends as he was very academically gifted, his days marked by long hours of studying Sufi doctrine in the mosque. This motivated his fellow students to beat him, possibly out of jealousy at the fact that he excelled. However, fearing shame and humiliation, he hid his wounds from members of his community until he was treated.[2] After years of bullying and physical abuse during his childhood, Imam Shamil was transformed and subsequently emerged as the heroic figure that we read and know about today.

After receiving traditional education in his village, Imam Shamil continued in his pursuit of knowledge. By the age of 20, had already travelled to Damascus and gained a substantial amount of knowledge in Islamic sciences. As a young man, Shamil’s intellectual and spiritual pursuits were vast and profound. He gained the admiration of his community on account of his eloquence and learning. However, his life experiences were marked by ceaseless raids, incursions, and invasions inflicted upon his people by the Russian Empire. In 1834, following the martyrdom of his predecessor Ghazi Muhammad and the assassination of his successor Hamza Beg, Imam Shamil was elected as the Imam of the Caucasus, making him the third Imam of the Caucasian Imamate[3] and in charge of leading the struggle.

Shamil, now an Imam of the Caucasus mountains, consolidated his power and authority by engaging in his noble pursuit to unite the warring Caucasian tribes under the banner of Islam. While the previous Imams had struggled to do this, Imam Shamil succeeded in winning the hearts of tribes and uniting them against a common enemy by the power of his fairness and piety in applying the Sharī’ah. Little did the Russians suspect that after their assault on Gimry and the death of Imam Shamil’s tutor Ghazi Muhammad, yet another warrior would emerge from among them who would later wage unrelenting warfare against them and delay their imperial advance by 25 years.

Despite constraints in his means and manpower, as well as superiority of the Russian arsenal, Imam Shamil’s military prowess remained untarnished. The years 1834 to 1836 were marked by relative peace for the mountaineers, who later emerged with a number of great victories resulting from a series of successful military campaigns, particularly in the year 1837. One of these campaigns included the Russian attack on Ashilta, in which the Russian General Fese was forced to withdraw at the point of victory due to enormous losses in personnel at the hands of Imam Shamil’s small band of warriors.[4]

While in Chechnya, Imam Shamil extended his power and influence in the region, similar to what he had done in his native Dagestan.[5] Imam Shamil’s effective mobilisation of the Chechen forces resulted in the army successfully managing to fend off the Russian invasion into Dargo in modern-day Chechnya.

This happened twice. The first resistance was in 1842 when the mountaineers capitalised on the rough terrain the mainland Russians were not accustomed to, and after suffering heavy losses, the Russians were repulsed from the area.[6] Infuriated, Tsar Nicholas I subsequently banned any offensive attacks for two years. This benefited Imam Shamil, who had launched a number of offensives in 1843, allowing him to regain Russian-controlled territory in Dagestan.[7] The second resistance was in 1845 at the Battle of Dargo. Here, Imam Shamil secured an extremely decisive victory, whereby Russians were forced to retreat and just about escape complete annihilation despite outnumbering Imam Shamil’s warriors by an overwhelming majority.[8] These victories reflected the steadfastness of Imam Shamil’s forces in the midst of a bloodthirsty onslaught that gave no quarter.

Revered by both friend and foe, Imam Shamil had a reputation that preceded him. News of his remarkable victories against the Russian forces began to circulate at home and abroad. However, despite the dark and gruesome realities of warfare, Imam Shamil remained focused on the spiritual dimension, devoting much of his time and attention to the development of society and the establishment of a new state. This new society that Imam Shamil nurtured and built was to be governed and preserved by the Sharī’ah.

To many, Imam Shamil was considered a reformer, as his orthodoxy was reflected in his strong denunciation of the widespread non-Islamic traditions that were deeply entrenched in the Dagestani and Chechen communities. Aside from being an extremely formidable leader, Imam Shamil was also the founder of a new state. He adapted the Sharī’ah to the local environment through the introduction of a new set of ordinances tailored for certain situations, aside from those which the Sharī’ah already directly addressed.[9]

With the emergence of the new and competent Russian General Aleksandr Baryatinsky, Imam Shamil’s reign over the Caucasus mountains began to see its final days. During the final conquest of Chechnya of 1851 and 1852, General Baryatinsky adopted new tactics of warfare and was able to effectively manipulate the mountaineers as a means to an end through his colourful personality that appealed to the local tribesmen.[10] During the summer of 1859, the Russians mounted an eight-day-long siege, until Imam Shamil, fearing for the lives of his family, was finally forced to surrender, unable to further resist their advanced military tactics.

Having earned the respect of his enemies through his unrelenting resistance against Russian imperialism, Imam Shamil was given a rather comfortable retirement in Kalúga, south of Moscow, which was unlike the treatment given to other enemies of the Russian Empire.[11] In 1870, he obtained the permission of the Tsar to make his second and final pilgrimage to Mecca. Following his visit to the Prophet’s Mosque, Imam Shamil passed away in Medina in 1871.[12]

Imam Shamil is regarded an exceptional leader and an example not only for the people of Dagestan and Chechnya but the entire Muslim world. Not only did he display formidable courage and resilience in the face of oppression, he was also a spiritual and religious reformer whose teachings and principles formed the foundations of a reformed society, ensuring it was devoid of non-Islamic customs.

Over the duration of 25 years that were brutal and challenging, Imam Shamil was the living shield and beacon of knowledge for the people of Chechnya and Dagestan. His legacy inspires the continued struggle of Chechens through to the 21st century. However, the Imam’s greatest milestone was his visit to Medina, where he prayed in the mosque of the Prophet Muhammad. It was on the 4th of February 1871 that he passed away, and he was subsequently buried in Al-Baqī’, a privilege only a few from the Ummah have attained.

Omar Hammuda has a bachelor’s degree in Anthropology from the University of Bristol and a master’s degree in Global History from the University of Birmingham. His research into comparative macro and micro history has allowed him to obtain a world historical perspective in his analysis of societies, whilst realising the power and depth of individual cultures and norms.