How do Muslims improve their position in the world today? 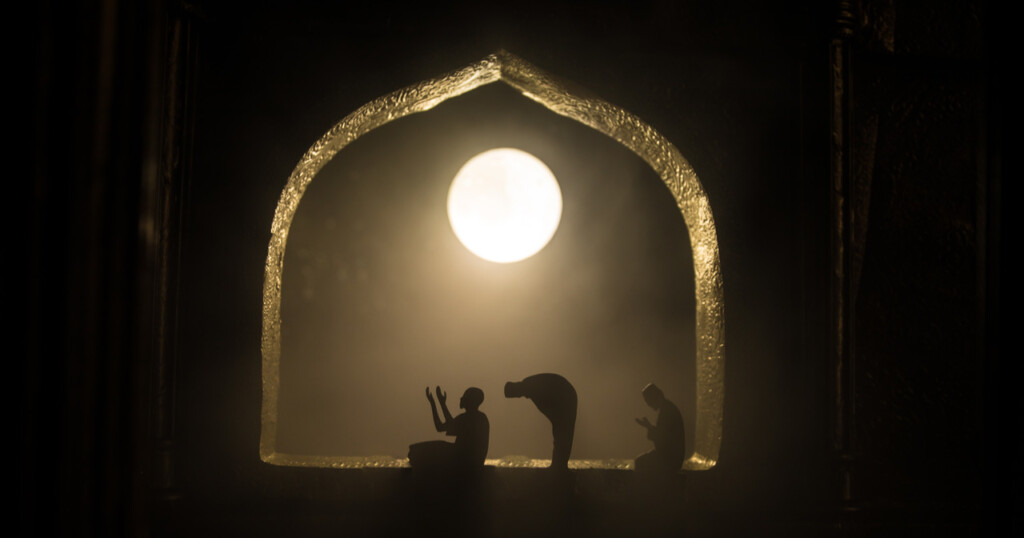 One of the darkest periods in human history was the 6th century CE, when the Romans and Persians ruled the West and East, respectively. Governing classes were drunk with power and indulged in debauchery and sensuality. The middle classes tried to copy them. The common people were in abject poverty. Idol worship and sexual promiscuity was prevalent, as was the caste system in places like India, where the lives of the lowest castes were the same as that of cats and dogs.

During the same period, Arabs were matchless in their eloquence and use of language. They held qualities such as chivalry, courage, and trustworthiness in high esteem, but they had also sunk to the lows of idol worship, alcoholism, and gambling, even staking their entire household on a single bet. Prostitution was rampant, daughters were buried alive at birth, and women were treated as commodities. Tribalism was pervasive – even trivial incidents would cause wars to erupt between different tribes.

The renowned scholar Sheikh Abul Hasan Ali Nadwi writes in his wonderful book What the World Lost With the Downfall of the Muslims that humanity in the 6th century lay gasping in the throes of death, and God raised a Prophet to resuscitate humanity and deliver it from darkness into light.

“Alif, Lam, Ra. [This is] a Book which We have revealed to you, [O Muhammad], that you might bring mankind out of darknesses into the light by permission of their Lord – to the path of the Exalted in Might, the Praiseworthy.”[1]

Amazingly, in the space of less than a generation, the Arabs were transformed from a people who were looked down upon by the world, to a group who were held in high esteem and awe. From this generation came luminaries such as ‘Umar b. al-Khattāb, who went from being a shepherd and burying his daughter alive pre-Islam, to become the leader of a nation spanning different continents. Salmān the Persian, a refugee and son of a village priest, returned to his homeland as a governor. Bilāl, a Black Abyssinian slave, went from being tortured in the boiling hot desert sands to someone who was called “our master” by Abu Bakr and ‘Umar, and after whom millions of people of all races have been named.

There is the example of Rabī’ b. ‘Āmir, who was sent as an envoy to the Persian Empire, a world superpower at the time. Rabī’ arrived riding a small horse, wearing rags, and carrying poor equipment, yet refused to take off his armour and helmet when asked to do so. His lance pierced the expensive carpet underneath as he walked, and he proclaimed without any hesitation, “We have been sent by Allāh to deliver whom He pleases from the overlordship of His slaves (i.e. men) to His own overlordship, and from the narrow confines of this world to the boundlessness of the next, and from the oppressiveness of other religions to the fairness and justice of Islam.”

During these early generations, Muslims had leaders who genuinely cared and loved their people. ‘Umar b. al-Khattāb would go out on patrols in the middle of the night with his servant, personally lifting large sacks of food on his back and distributing it to the hungry and needy. Such was his piety that he would be scared of any injustice that would occur while he was the leader, even as far as to be worried that he would be asked about the maltreatment of animals on the Day of Judgement.

How about the story of the Caliph al-Mu’tasim in the 9th century CE? He was drinking water when he was told that a Muslim woman who had been taken captive by an enemy several hundreds of miles away had called out his name for help. Al-Mu’tasim immediately put his cup down and personally set out with an army so massive that when its head reached its destination, its tail was still at the base camp.

From these great men came the blueprints of a culture like no other – a culture that took over three continents and led to an age of enlightenment, whilst the rest of the world lay in darkness. We read that the superpowers of the world at the time held the Muslims in awe and reverence. One Roman officer remarked about Muslim soldiers: “At night you will find them prayerful; during the day you will find them fasting. They keep their promises, order good deeds, suppress evil, and maintain complete equality among themselves.” Another said: “During the night it seems that they do not belong to this world and have no other business than to pray, and during the day, when one sees them mounted on their horses, one feels that they have been doing nothing else all their lives.”

Today, the world is in turmoil. Even before the onset of the COVID-19 pandemic, we do not need to look far to find examples of oppression; unjust wars, and injustice both on an international and individual level are rampant.

Sayyid Qutb eloquently noted that one of the most important characteristics of Islam is that it teaches its followers how to acquire self-confidence without any conceit or egotism. Sayyid Qutb also stated that the faith requires the Muslim to shoulder the responsibility of humanity at large and enjoins on him the trusteeship of the entire human race. It is the duty of Muslims to guide to the right path those who have gone astray, as well as lead men from darkness to light, with the help of light and guidance given to them by God.

“You are the best nation produced [as an example] for mankind. You enjoin what is right and forbid what is wrong and believe in Allāh. If only the People of the Scripture had believed, it would have been better for them. Among them are believers, but most of them are defiantly disobedient.”[2]

Sadly, Muslims today are generally not living up to this standard. Although there are decent God-fearing people amongst us, they are few and far between. Ignorance and backwardness are widespread in our communities. As Sheikh Abul Hasan Ali Nadwi said, “The decline of Muslims is due not to the shortcomings in Islam but to their failure to live up to Islam.”

So the question is, why have Muslims gone from such an illustrious past to the ignominious state we see today? More importantly, how do we regain that lofty position as leaders of mankind that Allāh has ordered us to be?

Many look at the poor financial state of some Muslim countries and contend that we need to become more financially powerful so that we do not rely on other countries for loans and aid.

Others would say that Muslims should study hard and excel in academia to lift ourselves out of the mire – a good idea, perhaps, because it appears that the Golden Age of Islam is synonymous with scientific achievements. The historian Robert Briffault writes that “science owes a great deal more to the Arab culture, it owes its existence,” and that “had it not been for such Muslim upsurge, modern European civilization would never have arisen at all.” We know that Muslim scientists were at the forefront of new discoveries in the fields of astronomy, chemistry, medicine, and mathematics, to name but a few. Today, the Muslim world lags behind in academia and technological prowess.

But although there is some truth to the above arguments, the reality is that financial wealth and scientific progress alone will not help the Muslim world to advance.  The evidences for this are many.

The Prophet Muhammad (sall Allāhu ‘alayhi wa sallam) could not read or write, like many of his Companions, most of whom were poverty-stricken. Yet they were so blessed and confident in their message that they spread it over many cultures and continents over a short period of time. The Muslims in Spain were technologically advanced, but their hearts became so attached to the dunya that they eventually lost everything. Tellingly, when the last Muslim ruler of Al-Andalus was looking at the land he had just lost to the Christians and weeping, his mother said to him, “Do not cry like a woman over what you could not defend like a man.” The strength of any community, whether Muslim or not, lies in the character of its people, not its wealth or technology.

Today, many Muslims have a lot of money, and there are many scientifically literate Muslims at the forefront of their fields, yet sadly their hearts do not have a strong connection to Allāh. Science and academia cannot promote good character. In fact, it may bring about the mentality of ‘survival of the fittest’ and a community without ethics. The real purpose of science is to remove barriers in the way of the development of man’s personality by harnessing nature to broaden life and make it rich. With such an advancement, a believer has humility and can use these gifts appropriately in the path of faith and righteousness in order to worship his Lord better.

The only way that Muslims will regain their lofty status in the world will be by returning to the worship of Allāh and attainment of piety. Although we should aim to excel in the fields of science and academia, as well as gain wealth through permissible sources, these things in and of themselves will not guarantee success unless the pleasure of Allāh is attained. We should be aiming for Muslims to fulfil the basic obligations of Islam, namely, prayer, Zakāh, fasting, and Hajj, in order for our character and manners to improve.

Allāh the Mighty and the Majestic is the Lord of all creation. He only needs to say ‘Be’ for His Will and Command to be carried out. If He wanted Muslims to regain leadership in the world, He could easily do so. We should therefore realise that true success will only happen once we try to fulfil the obligations we owe to Him and once He is happy with our efforts. If we fail to reach this objective, we will never be successful no matter how much power, wealth, or superiority we think we have over our enemies.

Two examples perfectly illustrate this. The first is the Battle of Uhud, in which the Muslims were on a high after defeating Quraysh in the Battle of Badr. The Muslims had with them the Prophet of Allāh, the best and most beloved of all creation to Allāh. They were winning in the battle, but when some of the archers disobeyed the explicit command of the Prophet because they were tempted by the spoils of war, their imminent victory was lost, and they sustained many casualties.

The other illustration of this principle is when the Prophet and Abu Bakr were migrating from Makkah to Madina. They hid in a cave, but the Quraysh, in their attempt to kill them, followed them to the entrance of the cave. However, Allāh made a spider weave its web at the entrance of the cave, and when the Quraysh saw this, they thought that no one could be inside, so they went away. This shows that if Allāh wants, He can make a spider’s web – flimsy and weak as it is – a cause and means of victory for whomever He chooses.