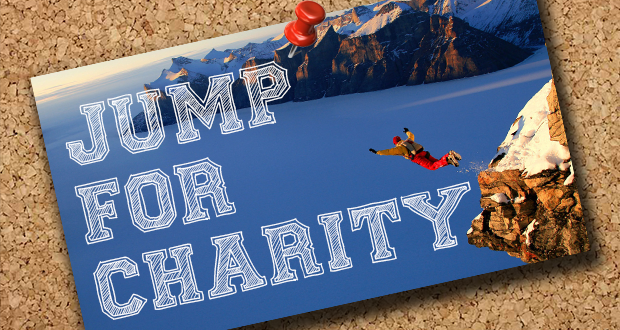 “I am skydiving for Medical Aid for Palestinians; please donate generously for a truly worthy cause,” is a request that was retweeted to me some months ago. Naturally, any attempt to raise money for a people who are suffering under the yoke of oppression and terror deserves support, but I could not help but reply back to the individual in question and ask, “Why do you need to skydive to raise money for a worthy cause?”

The truth is that if a cause is genuinely deserving, people should be ready and willing to support it financially with a simple request. The mere fact that sincere individuals feel compelled to undertake some sort of activity to raise funding for their cause is, in my opinion, symptomatic of an underlying problem.

The example of skydiving is only the most recent; a particular culture has developed in the fundraising world where Muslims seem more ready to part with their money when provided with a celebrity speaker and three-course meal. I even heard one person say (paraphrasing) “It’s not worth going to this event, because there aren’t any good speakers coming.” These attitudes, in my opinion, and naturally I stand to be corrected, are the corollary of the adoption of a culture whose approach, if not antithetical to the tradition of our Prophet (may the peace and blessings of Allāh be upon him), is questionable at the very least.

My concern with these methods, is that they potentially divorce the act of charity from its ultimate purpose, which is to please Allāh and attain His Paradise. This is not to say that the two are mutually exclusive, but having assisted in organising fundraising dinners in the past, the considerations of fundraising committees are focussed around how to make the event attractive enough to secure a broad base of attendees and potential donors. Discussions usually focus on the style of the hotel, the quality of the food, the calibre of the presenters, the uniqueness of performances, etc.; all seeming to focus on incentivising the experience in order to ‘drag people in’. The importance of exhorting our fellow Muslims to donate for a worthy cause and by doing so simply earn the pleasure of their Lord, has become somewhat lost in logistics.

I place less blame at the feet of smaller charities in undertaking such events, because the predominant fundraising culture has forced them to conform or lose out. In fact, fundraising has developed into an industry of its own. With the proliferation of Islamic charities in the UK, the ‘fight’ to secure donations from a very limited Muslim supporter base has become fierce and necessarily corporate. The industry has become a multi-million pound enterprise with exorbitant sums of money paid to ‘Islamic’ TV channels throughout the year for advertising, and to professional fundraisers who have managed to turn the act of charity into a well-paid career. What this means is that established charities which have a broad base of support and therefore more finance at their disposal, can afford the fees of the channels and experienced fundraisers, while smaller charities that are often undertaking critical work for the Muslim community, and already struggling financially, will necessarily lose out. In order to claim a piece of the pie, these smaller charities are forced to hold one-off lavish soirees, paying significant sums of money for fancy venues, celebrity speakers, professional fundraisers, live entertainers, etc., most of which is met through sponsorships, but part of which is inevitably sourced from the charity’s coffers which should ideally be used for beneficiaries themselves.

While tempted to delve further into the fallacies of the western capitalist system and how Muslims living in the west unwittingly fall victim to conceiving of solutions borne out of a culture which is the very antithesis of their faith, I will instead share with you two moving statements of the Prophet (may the peace and blessings of Allāh be upon him), which I heard only very recently:

Anas reported that the Prophet (may the peace and blessings of Allāh be upon him) said, “The giving of charity extinguishes the anger of your Lord and averts an evil death.”[1]

‘Uqbah b. ‘Āmir reported that the Prophet (may the peace and blessings of Allāh be upon him) said, “The believer will be under the shade of his charity on the day of resurrection.”[2]

Notwithstanding the evident need to dig deep and help Muslims in times of a crisis such as we have witnessed with our brothers and sisters in Syria, we should, in principle, have a more measured approach to giving charity as a community. The first is to proactively give charity with a sincere intention. The second is to give to several organisations rather than one. The third, rather than simply giving your money away to a charity that has the best looking advert on TV or your favourite Muslim celebrity employed to raise money on its behalf, is to take a more methodical approach. You may, for example, decide on supporting six charities; four whose work is based in the UK and the other two who predominantly work abroad. When selecting charities, a person will often find himself or herself confronted with a number of organisations which undertake virtually the same type of work. Selecting four or even two charities that have the same remit would not be sensible; it would be preferable to consider those charities that are offering something unique to help Muslims who would otherwise have been forgotten and neglected by the community.

I would like to reiterate that I am not suggesting all Muslims help six charities in particular, but certainly there are a number of charities that require our support and giving all of one’s money to one organisation is not as useful as helping several. It is up to every individual to decide on his or her algorithm of how their charity should be split, however, whichever way we decide to give charity, we should always be concerned for the correctness of our intention, as the Prophet (may the peace and blessings of Allāh be upon him) said, “Indeed every action is judged according to its intention, and verily, each soul shall receive the reward of that which it intended.”[3]

I ask Allāh to make our intentions sincerely for His sake, to earn His pleasure, mercy and reward and that He enters us into His Paradise with the Prophets, with those that affirm the truth, the martyrs and the righteous, Amīn.

Previous: [al- Ṭaḥawiyyah Pt 30] The Qur’ān is The Uncreated Unparalleled Words of Allāh part 3/3
Next: The Waged War on Islam in Egypt Part 3