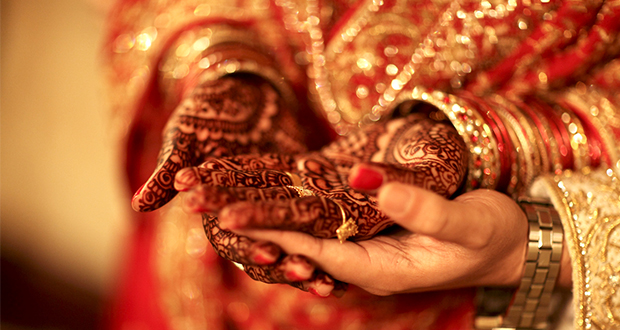 Nikāḥ is an Arabic word, having the literal meaning of ‘aqd’ or unity. It covers the sense of both marriage and coitus. The English word marriage covers half the meaning i.e. to tie one’s nuptial knot with another. In the Holy Qur’ān, marriage has been called as mīthāq (covenant), a covenant between the husband and the wife in the presence of human witnesses and under the vigilance of the All-seeing Lord, the Master of the universe. The mutual consent is technically called affirmation or declaration and Qabūl (acceptance) in fiqh.

Islām – the living religion – does not believe in the absolute suppression of the sensual side of human nature. The conception of the saintly life in Islām is not, therefore, the extermination of all carnal impulses, but to control them and keep them within proper limits. Islām does not make the life of an individual completely dark and dreary, devoid of all enjoyments of life. Islām encourages healthy enjoyments and one out of these is the satisfaction of sexual desire under the divine bond of Nikāḥ. But one thing should be borne in mind; that Islām does not associate the idea of sexual pleasure with that of sin and vice. Pleasure gives strength to the moral side of a man provided one does not transgress the limits of ethical code. That is why our beloved Prophet Muḥammad (sall Allāhu ʿalayhi wa sallam) stressed the same fact by saying;

“O! Young men, if you have the means to get married, get married, for it restrains eyes from casting evil glances and preserves one from immortality”[1]

According to another tradition in both Saḥīḥ Bukhārī and Saḥīḥ Muslim,

This ḥadīth gives the sum and substance of the ideal life as envisaged by Islām. According to Islām, life is not a wretched prison or a dark grave, nor is it a happy hunting ground where one is absolutely free to hunt whatever one likes, it is a life worth living provided one tries to live within proper moral limits. Thus in the ideal life of Islām, there is no place for shifting the natural psychic impulses, Islām’s approach to life is not negative – a systematic letting die of all the propensities of life, which in simple words is called self-mortification. Islām exhorts its followers to live life with full zest and vigour. In other religions, piety lies in denying oneself the relish of life, whereas in Islām piety is attained in throwing oneself resolutely and joyfully in the arms of life, but not be overpowered by its carnal, temporary temptations to the extent that one loses its purpose. Islām teaches us that there is nothing superfluous and nothing inherently, absolutely evil in human impulses. They are creative forces given to man provided they are directed to fruitful channels.

The monastic life which is considered to be an ideal life according to the wrong concept of religion is not the one required by God, as this fact is stressed by Allāh (subḥānahu wa taʿālā), His Messenger (sall Allāhu ʿalayhi wa sallam) and the scholars of Islām. There is no monasticism in Islām. [3]

One reason behind this is that monasticism makes a man selfish, much to the neglect of all social responsibilities. It hardens the heart and fosters the sense of ingratitude towards those who are bound to the so called saints by the chords of earthly ties. Mothers are abandoned, wives are neglected and children are left alone as beggars to the mercies of the world. This false ascetic is concerned with the salvation of his own soul. However Islām exhorts us to exhort people towards truth and patience. The serenity of his devotion is considered to be impaired by the discharge of the simplest duties of his family and to his community and state.

Like all other religious duties, Nikāḥ is also one of the important religious duties which must be performed by every Muslim living in the present world. But unfortunately we have made this Sunnah an innovation (bidʿah) by including our own ideas and thoughts in it, with the result of the fornication level in our own valley being increased to a great extent. The marriage done today is considered to be the modern form of Nikāḥ. In no sense is it a Sunnah, it is an absolute innovation, shrouded underneath the name Nikāḥ. This new form of Nikāḥ has been invented mainly by the rich of our times, for their own interest and taste. They profess their marriage ceremonies far and wide very proudly by quoting, “Nikāḥ is my Sunnah” – the famous tradition of our beloved Prophet (sall Allāhu ʿalayhi wa sallam) on their marriage cards. But they fail to realise that if Nikāḥ is the Sunnah of our beloved Prophet Muḥammad (sall Allāhu ʿalayhi wa sallam), then the way to do this religious duty must be according to the same way as shown by the Last and Final Messenger (sall Allāhu ʿalayhi wa sallam). Instead of this, we celebrate this religious duty according to our own whims and desires, as a result, this Sunnah has been changed into an innovation. Thus making it hard for the poor people to get their daughters and sisters married, as the demand of society is of such a high standard. In this way we have made a simple religious duty a highly complicated thing. This has led to many harmful and shameful consequences which are manifesting themselves thick and fast. The level of religious piety has decreased and that of fornication has increased to a great extent in the recent years. The only way to get rid of this affliction is to follow the Last and Final Messenger (sall Allāhu ʿalayhi wa sallam), the Prophet Muḥammad (sall Allāhu ʿalayhi wa sallam), who has taught us to behave in every sphere of life.

One has to stand firm and fast against all odds which befall him in this big bad world. It is an arduous task to give rebirth to a Sunnah which the people have trampled. That is why our beloved Prophet (sall Allāhu ʿalayhi wa sallam) once remarked,

But if anyone tries hard to implement the word of Allāh (subḥānahu wa taʿālā) and His Messenger (sall Allāhu ʿalayhi wa sallam) and does not succeed in doing so, he will still, inshāAllāh, receive a great reward for doing the act.

Truly speaking, I believe that one should not attend those marriage ceremonies which are boldly and openly contradictory to the Islamic Sharīʿah. I personally cannot bear the place where the basic principles of Islām are violated knowingly. On such places there may be Allāh’s wrath. That is why I refrain from attending such parties and exhort other people to do the same. If anyone is not able to curb an evil prevailing in society, at least he should not indulge himself anyway in that act. But when I try to emphasise this fact to others, they would put forth many objections. Many of them would quote the ḥadīth that Ibn ʿUmar (raḍiy Allāhu ʿanhu) narrates that Allāh’s Messenger (sall Allāhu ʿalayhi wa sallam) said,

“Accept the wedding feast when you are invited and he who does not accept the invitation disobeys Allāh and His Messenger (sall Allāhu ʿalayhi wa sallam)”. [5]

There is no doubt on the authenticity of the above-mentioned ḥadīth. But the only difference lies in the understanding. The companions of Allāh’s Apostle (sall Allāhu ʿalayhi wa sallam) were the best people who could understand this ḥadīth in the best way possible, as they lived in the blessed company of Prophet Muḥammad (sall Allāhu ʿalayhi wa sallam). Ibn Qudāma (raḥimahullāh) narrates in al-Mughnī,

“Once the famous companion Ibn Masʿūd (raḍiy Allāhu ʿanhu) was invited to a marriage feast by another companion. The former saw a picture hanging on the wall, as a result he immediately left the party without eating anything there.” [6]

These traditions drive home the point that one is not bound to accept the invitation at a place where the morals of Islām are not respected. So no one should force any other to accept a marriage feast if the feast is simply hosted for worldly gains.

Furthermore the renowned scholars of Qur’ān and ḥadīth give utmost importance of accepting an invitation of any kind. A person who is invited to a feast should thankfully accept and should not reject it without any valid reason as such kinds of feasts foster love among the people. The wedding feast is to be given priority in this matter as it is an auspicious occasion in the life of every Muslim. But if the feast means the performing of actions which are openly known to be contradictory to Islām, then participating in that means supporting this devilish act.

Of course, no discussion that takes into consideration social life can be absolutely black and white, which is why at the end of the day every individual has to make a decision as to how to go about their conduct when they see something reprehensible at a gathering. We must remember that enjoining good and forbidding evil has its methodology, and we should strive to use gentleness and wisdom as much as we can. One of the greatest of bonds between human beings is that of īmān, and we must remember to try our utmost before hurting the sanctified relationship between brothers and sisters in Islām, as it is no light matter. This is why we need to view this discussion through the prism of good akhlāq (conduct) and wisdom, all the while being very wary of not falling into clear-cut sin.

The life of this world counts for nothing compared to the hereafter which is better and more lasting. The real success is to find a place in Jannah on the Day of Judgment when no soul will help any other soul.

Peace and salutations on the Last and Final Messenger of Allāh (sall Allāhu ʿalayhi wa sallam) for conveying the message of God Almighty to mankind (Āmīn).