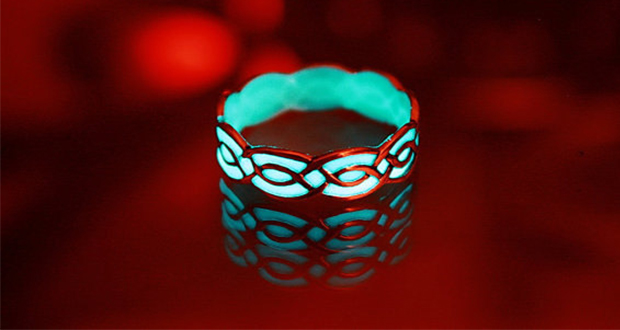 The Qur’an is a very unique book in terms of its composition. Its 114 chapters (or ‘Surahs’ in Arabic) are not arranged chronologically or thematically. Even within the individual chapters, numerous topics can be covered with sudden switches from one topic to another and then back again.

This unique structure at face value may appear to be disjointed. However, modern research has discovered a sophisticated structural coherence in the Qur’an known as ring composition.

ALSO READ: Why does the Qur’an seem incoherent?

Ring composition has been explained by Mary Douglas in her book “Thinking in Circles: An Essay on Ring Composition”. In ring compositions there must be a correspondence between the beginning and the end. It is structured as a sort of circle, or mirror image. The central meaning of the text is placed at its centre. The second half mirrors the first half, in reverse order — e.g., A, B, C, D, C’, B’, A’.

The correspondence usually involves the repetition of a striking or evident word or phrase, and there must be a clear thematic connection between the two sections. The correspondence serves to complete the circle and provide closure. Also, the internal sections – within the ring – must correspond to each other.

To put it in simple terms; ring composition is the equivalent of putting a mirror in the middle – what is mentioned in the first half will be reflected in the second half.

THE CIRCUMSTANCES OF THE QUR’AN’S REVELATION

Before getting into the ring composition of the Qur’an, it’s worth discussing the background and circumstances of the Qur’an’s revelation:

Prophet Muhammad, peace be upon him, could not read or write. The Qur’an itself confirms this:

“Those who follow the Messenger, the unlettered prophet, whom they find written in what they have of the Torah and the Gospel…” [Chapter 7, verse 157]

Throughout his life, prior to Prophethood, Muhammad did not have a reputation for poetry. In fact we know from history that at a personal level he disliked it and wasn’t a skilled poet. There are instances where he attempted to relate some poetry and would jumble the words up [1]:

Qatadah narrated, Aisha was asked: Did the Prophet, may the peace and blessings of Allah be upon him, use to relate anything from poetry?” She said: It was most detestable thing to him except that (at times) he used to relate a verse from the person of Banu Qays and he jumbled it up. Abu Bakr told him it was not like that. So the Prophet of Allah said, “By Allah I am not a poet and neither is it appropriate for me.”

The Qur’an was originally delivered to its first audience in the form of speech through recitation. Remarkably the Qur’an did not have the opportunity for an editorial process, as many verses were revealed on the spot as a response to unexpected questions and challenges that were brought forward to Prophet Muhammad from both believers and non-believers.

The 6,236 verses that make up the Qur’an were revealed gradually over a period of 23 years. It did not go through multiple revisions as it was revealed:

And those who disbelieve say, “Why was the Qur’an not revealed to him all at once?” Thus [it is] that We may strengthen thereby your heart. And We have spaced it distinctly. [Chapter 25, verse 32]

In light of these circumstances, one would expect the structure of the Qur’an to be incoherent. What we find however, is that it exhibits the sophisticated structure of ring composition.

THE RING COMPOSITION OF THE QUR’AN

Surah al-Baqarah, which we are going to use as a case study in this article, happens to be the longest chapter of the Qur’an and was revealed over a span of over nine years. Surah Al-Baqarah consists of 286 verses and can be divided into nine main sections based on theme/topic (verse numbers in parenthesis):

Re-arranging this list to fit into a ring composition:

The coherence in the form of a ring composition is best illustrated in the diagram below (please click on picture to enlarge) [2]: If we examine the 9 sections we find that they contain sub-ring compositions. So what we have is rings within rings (please click on pictures to enlarge) [3]: Here is a table showing parallels between the corresponding sections (the correspondences here are indicated horizontally): A noteworthy point is that the middle of Surah Al-Baqarah, the 143rd verse, mentions an important turning point for the Muslims:

Thus We have appointed you a middle nation, that ye may be witnesses against mankind, and that the messenger may be a witness against you. And We appointed the qiblah which ye formerly observed only that We might know him who followeth the messenger, from him who turneth on his heels. In truth it was a hard (test) save for those whom Allah guided. But it was not Allah’s purpose that your faith should be in vain, for Allah is Full of Pity, Merciful toward mankind. [Chapter 2, verse 143]

This turning point was the change in qiblah, the direction of the daily prayers, from Jerusalem to Makkah. This represented a big test for the believers. We find the mention of this important turning point in exactly the middle of the chapter. Moreover this verse even contains the word ‘middle’!

Finally, it’s worth paying special attention to a particular verse of Surah al-Baqarah, the 255th verse known as ‘Ayat al-Kursi’. This verse is considered the most excellent verse of the Qur’an, according to Prophet Muhammad. Its memorisation is highly encouraged, and it just so happens that it too exhibits a ring composition: Notice that the middle of Ayat al-Kursi mentions ‘before’ and ‘after’ which could be yet another allusion to the mirroring of ring composition.

It’s worth highlighting that not only does Ayat al-Kursi contain its own ring composition, but it is also positioned as a sub ring within two larger rings – a concentric ring composition: 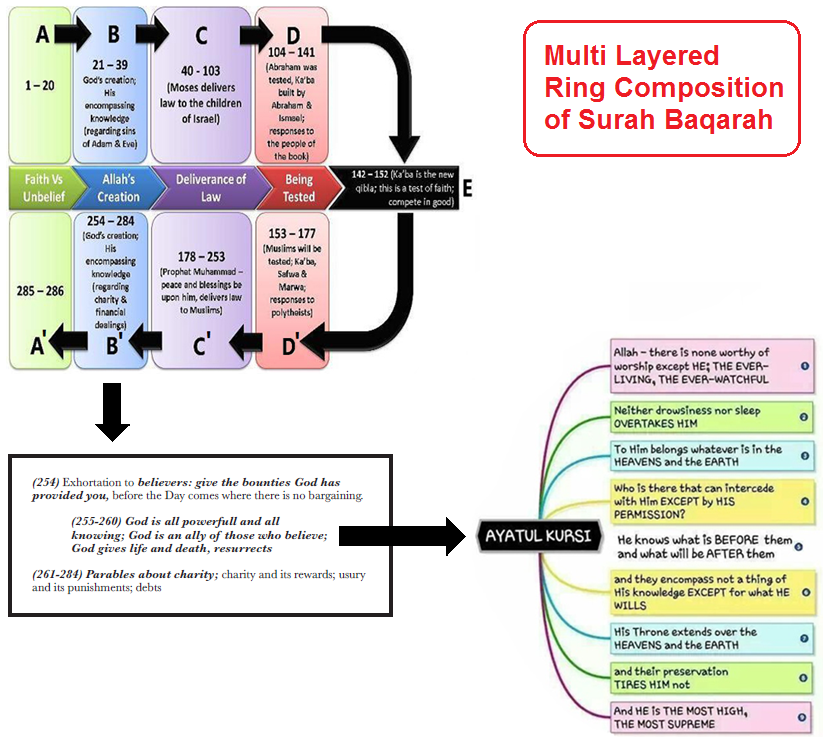 “Indeed this sura exhibits marvellous justness of design. It is precisely and tightly arranged, as we have seen, according to the principles of ring composition; even the section lengths fit perfectly in the overall scheme. Moreover, the precise structure serves as a guide, pointing to key themes in the sura. These occur, according to the logic of the pattern, at the centers of individual rings and, particularly, at the center of the whole sura. At the center of the sura, again, one finds instructions to face Mecca — this being a test of faith; identification of the Muslims as a new, middle community; and the message that all people, regardless of their qibla or spiritual orientation, should race to do good and God will bring them together.”

Ring composition has great exegetical application. For a ring structure not only holds the text together, but also gives focus to the important words and themes. By means of concentric patterning, ring composition calls attention to the centre – we are drawn to look here for the essential message. As Mary Douglas notes concisely, “The meaning is in the middle.” [4]

It also serves as an aid in memorisation, especially useful given the length of Surah al-Baqarah. In his study of ancient poetry, Cedric Whitman found that ring composition simultaneously performed both aesthetic and mnemonic functions. It aids memorisation by permitting the oral poet to easily recall the basic formulae of the composition during performances [5].

RING COMPOSITION IN OTHER LITERATURE

Some critics may point out that texts prior to the Qur’an had this literary style and therefore we cannot use this as evidence of the Qur’an’s divine origin. They put forward examples from Mary Douglas’ book “Thinking in Circles: An Essay on Ring Composition” which states that ring compositions are found throughout ancient Eastern Mediterranean literature (like Homer’s Iliad) as well as the Bible.

Comparing the Qur’an’s structure to that of other texts is like comparing night and day for the following reasons:

1. Prophet Muhammad could not read or write, so it’s a lot more difficult to plan such a structure when all you have to go on is memory (the Qur’an was revealed orally of course).

2. Prophet Muhammad was not a poet nor did he have any literary reputation, and yet the Qur’an has this remarkable structure. How can a person with little to no experience or skill in poetry/literature achieve such sophistication?

3. The verses of the Qur’an were not revealed in sequential order like with conventional texts. Surah al-Baqarah, the example covered in this article, was revealed over a period of many years with its verses interspaced with the revelation of verses from other chapters. Unlike conventional texts this makes implementing such a structure much more difficult.

4. Many verses of the Qur’an are linked to questions and events that occurred unexpectedly, so unless a person can predict the future, how could a human being plan the verses ahead of time when they were not in his control? Other texts such as the Bible were written by multiple authors long after Moses and Jesus (peace be upon them) which would make planning such a structure much easier.

5. The Qur’an did not undergo any editorial process, Prophet Muhammad would fix the positions of the new verses as soon as they were revealed to him. With each new verse, again which were tied to external questions and events that were outside of his control, he would not go off and review what had been previously revealed and see where he can fit them in order to maintain this ring structure. So spontaneous revelation was immediately followed by the placement of the verse into the Qur’an, and once placed it was fixed with no opportunity for later editing. Other texts such as the Bible show evidence of multiple authors and several stages of editing, again making is much easier to achieve such a structure.

In summary, it is the unique circumstances of the revelation of the Qur’an that make its ring structure a strong argument for its divine origin.

Given the difficult and protracted circumstances of the Qur’an’s revelation, one would expect it to be in disorder. However as this article has demonstrated, any such understanding reveals a lack of insight into the Qur’an’s sophisticated structure. Upon deep analysis of the Qur’an’s composition we see that it exhibits a remarkable structure. It is simply impossible for Prophet Muhammad, given that he could neither read nor write and had no reputation as a poet or literary expert, to have engineered such a structure himself. This represents compelling evidence that his inspiration for the Qur’an was God Almighty, as the Qur’an itself states:

“Your Companion is neither astray nor being misled. Nor does he say (aught) of (his own) desire. It is no less than inspiration sent down to him. He was taught by one mighty in Power.” [Chapter 53, verses 2-5]

2 – Original diagram taken from article at Islam21c, “The Coherence of al-Baqarah”.