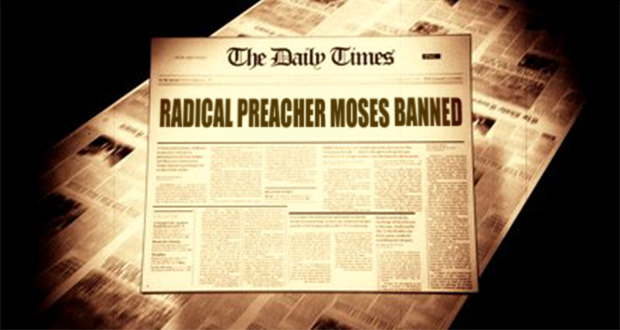 Mūsa (ʿalayhi al-Salām) returns to Egypt from Madyan. Informed by his lord that he has been chosen for a huge mission, Mūsa is set to confront the evil Pharaoh, the man who transgresses all boundaries set by Allāh. His task: to go with his brother Hārūn, and speak to the Pharaoh “mildly so he may take admonishment or become fearful”[1] and to send with them the oppressed community of the children of Israel. The Pharaoh, who has the audacity to claim that he is “the highest lord”[2] is to be warned that “the torment will be for him who denies (believes not in the Oneness of Allāh, and in His Messengers, etc.) and turns away (from the truth and obedience of Allāh).”[3]

Allāh reinforces Mūsa in his message to the Pharaoh by way of two miracles;

1) his stick, which by the will and command of Allāh, turns into a snake when thrown but returns to its previous state when Mūsa takes hold of it and

2) his hand, which “comes forth white (and shining), without any disease”[4] the moment Mūsa presses his hand to his side.

Mūsa (ʿalayhi al-Salām) unravels the signs before the very eyes of Pharaoh, in order to prove his claim to Prophethood. The Pharaoh in flagrant arrogance replies; ”Have you come to drive us out of our land with your magic, O Mūsa?”[5] Threatening to highlight what he perceives to be Mūsa’s deception, he continues: “…verily, we can produce a similar magic; so appoint a meeting between us and you, which neither we, nor you shall fail to keep, in an open wide place where both shall have a just and equal chance (and onlookers  could witness the competition).”[6]

So the date of this meeting is set, at high noon on the day of the festival, for all to see what ensues in clear daylight.

The Pharaoh gathers his best magicians, from far and wide, to come and expose the ‘magic’ of Mūsa and Hārūn. Motivated by the promise of riches and reward of being brought close to the Pharaoh, the magicians throw down their sticks, and “by their magic, appeared to him (Mūsa) as though they moved fast.“[7] Feeling a sense of fear inside him, Mūsa is ordered to “throw that which is in your right hand! It will swallow up that which they have made.”[8]

Thus the magicians’ sticks are swallowed up, and their falsehood perishes in the face of the true signs given to Mūsa by Allāh. Amazingly the magicians, who by morning were plotting the downfall of Mūsa and Hārūn, now fall down in prostration declaring: “We believe in the Lord of Hārūn and Mūsa.”[9] No longer do they accept the tyrant Pharaoh as their Lord, but instead they resolve to submit to the real Legislator and King, Allāh.

The Pharaoh could not stand without response and accept this public rejection of his dictatorial system. In a state of rage, terrorising the magicians, Pharaoh says, “I will surely crucify you on the trunks of date-palms, and you shall surely know which of us (Pharaoh or the Lord of Mūsa, Allāh) can give the severe and more lasting torment.”[10]

The response of the magicians, repeated a number of times in the Glorious Qur’ān, reveals a steadfastness on the religion that we all aspire for. Threatened with death by crucifixion, they say, filled with conviction in the promise of their Lord, “No harm! Surely, to our Lord (Allāh) we are to return.”[11] In other words, they do not care what the Pharaoh will do to them, anticipating something much better and more lasting for them in the hereafter; Paradise.

It is at this point in the story which we wish to make the focus of this article, inshāAllāh.

Openly rejected, in front of the eyes of his oppressed and maltreated nation, the Pharaoh and his chiefs consult and devise a plan. His evil right hand men goad him, saying, “Will you leave Mūsa and his people to spread mischief in the land, and to abandon you and your gods?”

The Pharaoh replies in an instant, declaring “We will kill their sons, and let live their women, and we have indeed irresistible power over them!”[12]

Elsewhere in the Qur’ān, Allāh tells us of the even more direct approach of the Pharaoh, where he boasts, “leave me to kill Mūsa, and let him call his Lord (to stop me from killing him)!” Deceptively justifying this proposed act of brutality, the Pharaoh says, “I fear that he (i.e. Mūsa) may change your religion, or that he may cause mischief to appear in the land!”[13]

A Bunch of ‘Mischievous’ Believers

Before moving on, it is important to focus on the baseless and false propaganda machine of the Pharaoh and his chiefs. On reflection of the passages above, one may ask, who really is the one spreading the mischief? Is it the one who calls the people to worship the One, all-powerful Lord, or is it the one who kills those who refuse to worship him? Is the ‘mischief’ being caused by the one who calls for an end to the unjustified oppression and violence, or the one who relentlessly oppresses and has no regard for the sanctity of humanity? Who is the one wrongly accused of transgression, when in fact he is the most upright person of his time? Who is the one striving to spread the truth, and who is the one propagating fabrications and redundant rhetoric?

In a nutshell, Mūsa is not spreading mischief or corruption. There is only one evil dictator here who has reversed his people’s inclination to their creator, convincing them that his pitiable personality fares an alternative to the Supreme Allāh, thus enslaving them all to his own agenda. There is only one ally of Satan here. It is the Pharaoh.

But how does this relate to today?

In an age where those who practice and preach towards the worship of one all-powerful Lord are labelled as ‘extremists’, ‘terrorists’, ‘oppressors’, ‘fundamentalists’ – the list is ever-evolving and endless – it becomes easy for the reflective mind to understand how this beautiful Qur’anic story relates to our time. Those who kill millions of innocent souls, and make some nation’s blood more justified in being spilt than others, are the same regimes that claim democracy, freedom, and morals of the highest order. Their actions retell the Pharaoh’s attitude, “we know no better a system than ours.” The invasion of countries, the violations of humans rights, the oppression of anyone who opposes their ‘gold-standard’ morals, is all justified. How? By labelling those who they oppose as the ‘mischief-makers, and corrupters’ of our era. The parallels to the story of Mūsa are startling. Oh how we long to appreciate the timeless nature of the glorious Qur’ān.

Today’s suffocating Pharonic labelling system should not leave us in a state of surprise or despair. This is the way of those who seek to oppose the true way of Allāh and His messengers. It is their way of justifying their oppression. It always has been and it always will be. But irrespective of the ‘label’ or name being ascribed to the adherers of Islām, Islām is superior in its essence and it is simply untouched by smear campaigns. To the rational mind, it is those very smear campaigns that kneel in despair and vanish in their naivety and senselessness when they target Islām. With this in mind, opponents of Islām, like the Pharaoh, tend to avoid intellectual dialogue but resort to defamation to play on the hearts and minds of society. We, however, rest assured in the knowledge that “Surely! Falsehood is ever bound to vanish.”[14]

So what did Musa say to his people when they were being labelled?

A man whose life involved so many challenges, Mūsa was ideally positioned to advise his people. Challenges were nothing new for Mūsa. Before he even spoke his first word, he was thrust into the river Nile in a basket. His life was quite simply one big challenge.

Galvanising his people, Mūsa urges them on, saying “O my people! If you have believed in Allāh, then put your trust in Him if you are Muslims!”[15]

Elsewhere in the Qur’ān we are told that “Mūsa said to his people: ‘Seek help in Allāh and be patient. Verily, the earth is Allāh’s. He gives it as an inheritance to whom He wills of His slaves, and the blessed end is for the God-fearing people.’”[16]
So what is our solution in dealing with today’s ‘labelling’ system?

The answer is given to us through these very profound words of Mūsa (ʿalayhi al-Salām). Reliance upon the Almighty, patience in the face of the great trails and tribulations of our era, putting our trust in the decree of the all-Wise, all-Knowing, and submitting fully and sincerely to The Lord and Creator of all things, is our solution. Not wavering from our mission, being steadfast and honest to the truth just as Mūsa and the magicians were, and holding fast to the rope of Allāh are all fundamental prerequisites to achieving the blessed end for those people of Taqwa (God-consciousness). Paradise will be the abode of those magicians who believed, and it will be our abode too if we truly seek it. InshāAllāh.

The Letters of the Qur’ān will never change. The sentences will never be altered. The book will never be manipulated or tampered with. It is protected by the irresistible Supreme Being, Allāh. But the lessons will remain timeless, and the Qur’ān will continue to serve those who approach it sincerely and with a pure heart.

May Allāh grant us the ability to be of those who sincerely live and die by the words of our creator. Ameen.