To give a sense of chronological perspective while reading this piece, the death of the Prophet ﷺ happened in Rabī al-Awwal, 11 AH / June, 632 CE
Featured 09/10/2022No Comments13 Mins ReadBy Shaykh Ali Hammuda 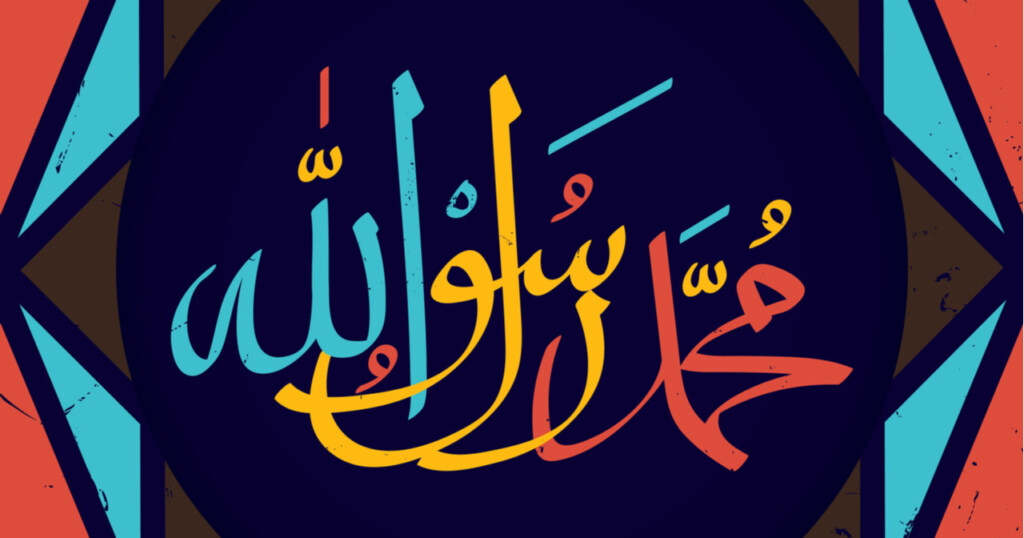 At a time when the Prophet Muhammad (ﷺ) had few followers and many powerful opponents, Allah revealed an āyah that, at the time, may have seemed astonishing: وَرَفَعْنَا لَكَ ذِكْرَكَ —”And We raised high your name” [1] When this was revealed, it may have been difficult for some to realise the extent to which the fame and reputation of the Prophet (ﷺ) would grow.

But today, we have the benefit of hindsight to begin to appreciate the echoes of this āyah across the ages, regarding—objectively—the most studied, most venerated, most followed and most beloved human being in the history of mankind, sall Allāhu ‘alayhi wa sallam.

No one with a sound intellect learns about him (ﷺ), except that they begin to admire and praise him—after all, that is what his name Muhammad entails (ﷺ).

Here are a few quotes from notable non-Muslims throughout history about the man who shook the world and set into motion an Ummah that would lead until the Day of Judgement.

“I knew that he was to appear, but I did not think that he would be from among you (i.e. the Arabs). If I knew that I would be able to reach him, I would have loved to meet him; and if I had been with him, I would have washed his feet (out of reverence). His dominion would certainly extend to this place which is under my feet.” [2]

“At that time, a certain man from among those same sons of Ismael, whose name was Mahmet [i.e., Muḥammad], a merchant – as if by God’s command – appeared to them as a preacher and the path of truth. He taught them to recognize the God of Abraham, especially because he was learned and informed in the history of Moses. Now, because the command was from on high, at a single order they all came together in unity of religion.

“Abandoning their vain cults, they turned to the living God who had appeared to their father Abraham. So, Mahmet legislated for them: not to eat carrion, not to drink wine, not to speak falsely, and not to engage in fornication. He said: ‘With an oath, God promised this land to Abraham and his seed after him for ever. And He brought about as He promised during that time while He loved Ismael. But now you are the sons of Abraham and God is accomplishing His promise to Abraham and his seed for you.” [3]

Zhu Yuanzhang: Hongwu Emperor of the Ming Dynasty from 1368-1398

It was recorded that,

“His Majesty ordered to have mosques built in Xijing and Nanjing (the capital cities), and in southern Yunnan, Fujian, and Guangdong. His Majesty also personally wrote baizizan (百字讃 / eulogy) in praise of the Prophet’s virtues.” [4]

To this day, copies of the above eulogy are on display in several mosques in Nanjing, China.

John Davenport: English clergyman and co-founder of the American colony of New Haven (1597-1670)

“The piety of Moses and Christ rejoiced in the assurances of a future Prophet, more illustrious than themselves and the Evangelist’s promise of a Paraclite or Holy Ghost, the comforter, was prefigured in the name and accomplished in the person of the greatest and last of God’s Prophets – Muhammad.” [6]

Edward Gibbon: English member of parliament, writer, and pre-eminent historian of his time (1737-1794)

“The greatest success of Mohammed’s life was effected by sheer moral force without the stroke of a sword.” [7]

“His [i.e., Muhammad’s] memory was capacious and retentive, his wit easy and social, his imagination sublime, his judgment clear, rapid and decisive. He possessed the courage of both thought and action.” [8]

“Muhammad was a prince who rallied his compatriots around him. In a few years, the Muslims conquered half the world. They snatched away more souls from false gods, pulled down more idols, demolished more pagan temples in fifteen years than the followers of Moses and Jesus did in fifteen centuries. Muhammad, indeed, was a great man… I hope the time is not far off when I shall be able to unite all the wise and educated men of all the countries and establish a uniform regime based on the principles of the Koran which alone are true and which alone can lead men to happiness.” [9]

Washington Irving: American diplomat, biographer, and historian who is often referred to as the “first American man of letters” (1783-1859)

“He was sober and abstemious in his diet, and a rigorous observer of fasts. He indulged in no magnificence of apparel, the ostentation of a petty mind; neither was his simplicity in dress affected, but the result of a real disregard to distinction from so trivial a source … In his private dealings, he was just. He treated friends and strangers, the rich and poor, the powerful and the weak, with equity, and was beloved by the common people for the affability with which he received them, and listened to their complaints … His military triumphs awakened no pride nor vain glory, as they would have done, had they been effected for selfish purposes. In the time of his greatest power he maintained the same simplicity of manners and appearance as in the days of his adversity. So far from affecting regal state, he was displeased if, on entering a room, any unusual testimonial of respect were shown to him.” [10]

“If greatness of purpose, smallness of means, and astounding results are the three criteria of human genius, who could dare to compare any great man in modern history with Muhammad?

“… Philosopher, orator, apostle, legislator, warrior, conqueror of ideas, restorer of rational dogmas, of a cult without images; the founder of twenty terrestrial empires and of one spiritual empire, that is Muhammad. As regards all standards by which human greatness may be measured, we may well ask, is there any man greater than he?” [11]

The Most Reverend Benjamin B. Smith: British bishop, lecturer, and fellow of Trinity College, Oxford (1794-1884)

“…he was Caesar and Pope in one; but he was Pope without the Pope’s pretensions, and Caesar without the legions of Caesar. Without a standing army, without a bodyguard, without a palace, without a fixed revenue, if ever any man had the right to say that he ruled by a right Divine, it was Mohammed; for he had all the power without its instruments and without its supports.” [12]

Thomas Carlyle: Scottish philosopher, essayist, and historian who was a leading writer of the Victorian period (1795-1881)

“It is a great shame for anyone to listen to the accusation that Islam is a lie and that Muhammad was a fabricator and a deceiver. We saw that he remained steadfast upon his principles, with firm determination; kind and generous, compassionate, pious, virtuous, with real manhood, hardworking and sincere. Besides all these qualities, he was lenient with others, tolerant, kind, cheerful and praiseworthy and perhaps he would joke and tease his companions. He was just, truthful, smart, pure, magnanimous and present-minded; his face was radiant as if he had lights within him to illuminate the darkest of nights; he was a great man by nature who was not educated in a school nor nurtured by a teacher, as he was not in need of any of this.

“How one man single-handedly, could weld warning tribes and wandering Bedouins into a most powerful and civilized nation in less than two decades… The lies which orientalists and haters of Islam had heaped upon this man are disgraceful to their own selves only.” [13]

“It is impossible for anyone who studies the life and character of the great Prophet of Arabia, who knows how he taught and how he lived, to feel anything but reverence for that mighty Prophet, one of the great messengers of the Supreme. And although in what I put to you I shall say many things which may be familiar to many, yet I myself feel whenever I re-read them, a new way of admiration, a new sense of reverence for that mighty Arabian teacher.” [14]

“Serious or trivial, his daily behaviour has instituted a canon which millions observe to this day with conscious mimicry. No one regarded by any section of the human race as Perfect Man has been imitated so minutely. The conduct of the Founder of Christianity has not so governed the ordinary life of His followers. Moreover, no Founder of a religion has been left on so solitary an eminence as the Muslim Apostle.” [15]

“I wanted to know the best of one who holds today’s undisputed sway over the hearts of millions of mankind…I became more than convinced that it was not the sword that won a place for Islam in those days in the scheme of life. It was the rigid simplicity, the utter self-effacement of the Prophet, the scrupulous regard for his pledges, his intense devotion to his friends and followers, his intrepidity, his fearlessness, his absolute trust in God and in his own mission. These and not the sword carried everything before them and surrounded every obstacle. When I closed the second volume (of the Prophet’s biography) I was sorry there was not more for me to read of the great life.” [16]

“Leaders must fulfil three functions – provide for the well-being of the led, provide a social organization in which people feel relatively secure, and provide them with one set of beliefs. People like Pasteur and Salk are leaders in the first sense. People like Gandhi and Confucius, on one hand, and Alexander, Caesar and Hitler on the other, are leaders in the second and perhaps the third sense. Jesus and Buddha belong to the third category alone. Perhaps the greatest leader of all times was Mohammed, who combined all three functions.” [17]

William Montgomery Watt: Scottish orientalist, historian, and Professor of Arabic and Islamic Studies at the University of Edinburgh (1909-2006)

“His readiness to undergo persecutions for his beliefs, the high moral character of the men who believed in him and looked up to him as leader, and the greatness of his ultimate achievement — all argue his fundamental integrity. To suppose Muhammad an impostor raises more problems than it solves. Moreover, none of the great figures of history are so poorly appreciated in the West as Muhammad.” [18]

“My choice of Muhammad to lead the list of the world’s most influential persons may surprise some readers and may be questioned by others, but he was the only man in history who was supremely successful on both the religious and secular level. It is this unparalleled combination of secular and religious influence which I feel entitles Muhammad to be the most influential single figure in human history.” [20]

Needless to say, the status of the leader of humanity is not elevated any further by the praise of mortals when the Lord of the worlds, Allah, had praised him from beyond the seven heavens, saying:

[5] Newlon, Brendan (2015). “Praising the Prophet Muhammad in Chinese: A new translation and analysis of Emperor Zhu Yuanzhang’s Ode to the Prophet” (PDF). The Matheson Trust.