72 years since the assassination of Hasan al-Banna 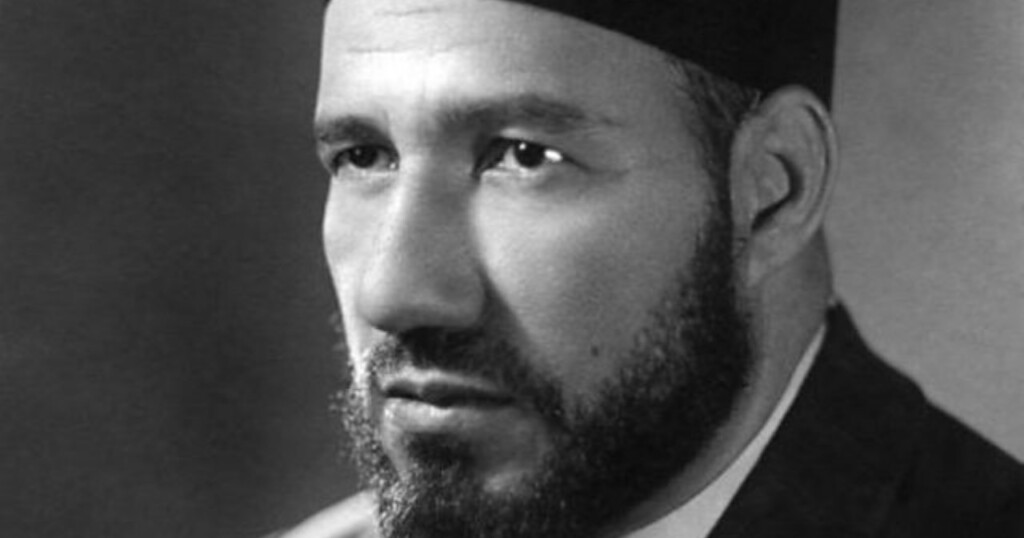 Today marks 72 years since one of the most influential Islamic figures of the 20th century, Hasan al-Banna (rahimahu Allāh), was assassinated by Egyptian secret police. [1]

Hasan al-Banna was born in October 1906, in the Egyptian town of Mahmudiyah. He was a school teacher, Imām and well-known for establishing one of the most influential and significant Islamic revivalist organisations, al–Ikhwān al–Muslimūn (Muslim Brotherhood).

The father of Hassan al-Banna, Ahmad ʿAbd al-Rahmān al-Banna was a scholar in Sharīʿah, specialising in Hadīth (prophetic traditions) and is known in the literature of Islamic scholarship as ‘al-Saʿaty’ due to him having worked as a watchmaker.

Hassan al-Banna memorised the Qur’ān at a young age along with many prophetic āhādīth. Al-Banna would frequent scholars at al-Maktabah al-Salafiyah and his greatest inspirations were Sheikh Mohammad Zahrān and Sheikh Muhib al-Dīn al-Khatīb. Seen as a visionary for Islamic thought and movement, al-Banna focused on instilling Islam’s universality, affecting and governing every area and aspect of existence and its application as a methodology for life, defying moral perversion and the disengagement between state and religion imposed by secularist ideologies on the Muslim world. [2]

Al-Banna studied at Egypt’s first modern institute of higher learning, Dār al-ʿUlūm, where he became a qualified teacher. He founded the Muslim Brotherhood in 1928, which is thought to be the oldest Political Islamic movement in the modern era. In the early stages of its formation, al-Banna headed commando formations that resisted the British colonisation of Egypt and Palestine and made liberating the Arab world from imposed colonial forces of its main objectives.

In 1936, al-Banna ramped up his political activism and by 1948 began openly calling on monarchs and leaders to implement the holistic Islamic Shari’ah in an attempt to revive the Khilāfah; Islam’s standard state-system that had united the entire Muslim world under a single umbrella for almost 1400 years.

He emphasised that any Islamic government must operate on three pivotal ethics: the fulfilment of responsibility of the ruler towards his Creator and towards the governed; the unity of Muslims under a structure of brotherhood; and recognising the will of the Muslim collective. He served as the General Guide of the organisation until he was assassinated in 1949. [3]

The organisation became one of the most substantial and effective movements in Egypt as a result of al-Banna’s powerful and fascinating leadership, which quickly gathered a membership of more than one million people. The impact of al-Banna was experienced in and outside Egypt. His organisation operated as an ideal model example for the growth and empowerment of other Islamic movements. His influence and strategy quickly spiraled and extended into other countries within the Middle East and eventually across the entire Muslim world. [3]

The vast majority of Islamic and political movements around the world have been impacted by the Muslim Brotherhood in one way or another and its academic, humanitarian and political institutions branch throughout the entire world. The Muslim Brotherhood alone held at one point 20% of Egypt’s 5,000 non-government organisations, serving the poorest through a system of wide-ranging social programmes. [4]

Besides him being a visionary and the lasting legacy that he left, al-Banna was inspirational and his speeches were captivating. Sheikh Ali al-Tantawi (rahimahu Allāh) once said:

“[al-Banna] is of the most articulate individuals to have ever climbed the pulpit, his sermons would tremendously impact listeners without him appearing emotional, he would make them cry, laugh, stand and sit whilst tranquil and quiet. He would shake the hearts of others whilst his own was serene.“

Of al-Banna’s many writings was the introduction of ‘al-Fath al-Rabbīnī’, an almost 6,000-page abridgement and categorisation of the Musnad of Imam Ahmad rahimahu Allāh. Here he spoke of Imam Ahmad’s virtues, his life, struggle and about his Musnad and status amongst the scholars of Hadīth.

On the evening of 12th of February 1949, Hassan al-Banna was assassinated by what are believed to have been secret agencies belonging to the government. Sources claim that he did not die from the initial gunshots and could have been saved but was instead left to bleed in hospital until he parted this world. Repressive authorities headed by King Farouk did not allow anyone to carry al-Banna’s body to his grave and his procession took place silently (rahimahu Allāh). [5]

The respected scholar Shaykh Abdullah ibn Abdulrahman ibn Jibreen, who was a member of the Council of Senior Scholars and Permanent Committee for Islamic Research and Fatwa is quoted to have said:

“Both [Syed Qutb and al-Hassan al-Banna] were Duʿāt (callers) to Allāh, and have displayed patience and perseverance more than many others. Both of them were patient in the face of being killed, having been killed unjustly without abdicating what they called towards. It was later that certain individuals emerged who insulted them and picked out their mistakes, classifying them as ‘misguided’, ‘callers to misguidance’, and disbelievers, outside the fold of Islām. It is an obligation upon a Muslim to recognise the people of good, indicating where they made mistakes and errors, whilst not disavowing the good of those who do good, nor denying the status and benefit of scholars. For, these scholars from the Muslim Brotherhood, have dignified stances that many who came after will never be able to match. This is despite them having made mistakes in Ijtihād for which they are excused.” [6]

We ask that Allāh (subḥānahu wa taʿālā) grants Hasan al-Banna (rahimahu Allāh), and all those who were killed unjustly Jannat al-Firdaus and that He brings about much greater good for their people in this world and the next.