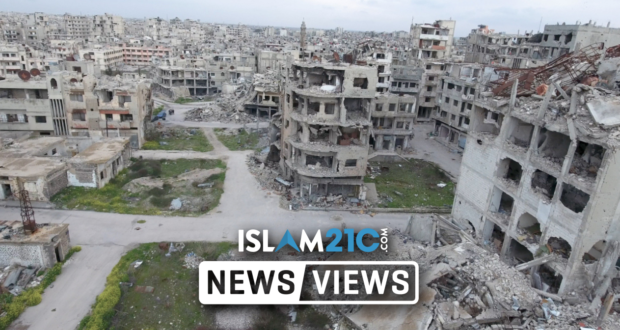 The Syrian regime on Friday agreed to a conditional ceasefire in the rebel-held and besieged province of Idlib.

The announcement follows months of intense bombing by regime forces and its allies on the last rebel-held province in the north of the country. Friday’s agreement, however, is on condition that the Turkish-Russian buffer zone is implemented.

The Assad regime also wants rebel forces to withdraw their soldiers and weaponry from the buffer zone in order for a longer lasting truce to be signed. Moreover, talks have resumed in Kazakhstan between Russia, Iran, and Turkey, who backs rebel units in northern Syria.

The Turkish-Russian deal, also known as the Sochi agreement, created a buffer zone of 15 to 20 square kilometers to separate regime forces from rebels in Idlib. This buffer zone will be monitored by both Russian and Turkish troops.

“The thirteenth round of the high-level meetings on Syria was held on August 1-2, 2019 in Nur-Sultan,” [1] a statement from the Turkish foreign ministry read, adding that “developments on the ground, particularly in the Idlib de-escalation area and efforts to find a political solution to the conflict were discussed in the meeting.” [1]

“In the meeting, the parties expressed satisfaction on the progress towards the establishment of the Constitutional Committee. They reiterated their commitment to conclude the formation of the Committee at the earliest and to convene it in Geneva,” [1] the statement said.

The Turkish foreign ministry also reassured the commitment of all parties to the Sochi agreement signed in September 2018 and their efforts to preserve the de-escalation zone and stabilise the region.

However, at the same time, the Turkish government condemned the Assad regime’s indiscriminate bombing of civilian areas in the overpopulated province, accusing the regime and allied forces of deliberately targeting civilians and infrastructure under the guise of combatting terrorism, and urging the regime to halt such attacks.

“Turkey has expressed grave concern for the regime’s deliberate targeting of civilians and civilian infrastructure under the pretext of combating terrorism and has stressed its expectation that these attacks must cease immediately,” the ministry added. [1]

Syria’s eight-year civil war was born out of peaceful protests by Syrian civilians pursuing reforms and changes to the Syrian regime. The latter’s response was one of violence and brutality, which forced the people to take up arms in defence.

Over 500,000 people have been killed in the regime’s crackdown, with many more being displaced. The Syrian regime, with backing and support from its allies in Russia and Iran, has been able to militarily defeat opposition and rebel fighters, and is regaining territory that has been lost in previous years.