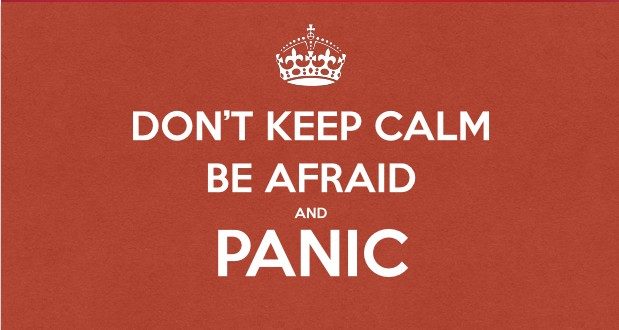 In a move of apparently exceptional stupidity, the UK government has issued a ban on electronic devices in cabin luggage for planes headed here from several Muslim countries. After the move, terrorists will have to check their bombs into the luggage hold, where they are presumably rendered harmless.

The ban applies to all electronic devices larger than 16 x 9.3 x 1.5 cm on direct passenger flights to the UK from Turkey, Lebanon, Jordan, Egypt, Tunisia and Saudi Arabia.

“It is not the result of a specific, identified terrorist plot, but of mounting concern in US and British intelligence circles at the ongoing interest amongst jihadist groups in the Middle East in blowing up a passenger plane in mid-air.”[1]

In other words, it is reminiscent of the corpus of counter terrorism policies not apparently predicated on actual threats but conveniently ramping up public fear and distraction away from actual issues.

Below is the article published on BBC news.

The British government has announced a cabin baggage ban on laptops on certain direct passenger flights to the UK from Turkey, Lebanon, Jordan, Egypt, Tunisia and Saudi Arabia.

The ban, which also applies to tablets and DVD players, follows a similar US move affecting eight countries.

Downing Street said it followed talks on air security and was “necessary, effective and proportionate”.

US officials said bombs could be hidden in a series of devices.

The ban applies to any device larger than 16cm long, 9.3cm wide or 1.5cm deep. It includes smart phones, but most fall inside these limits. 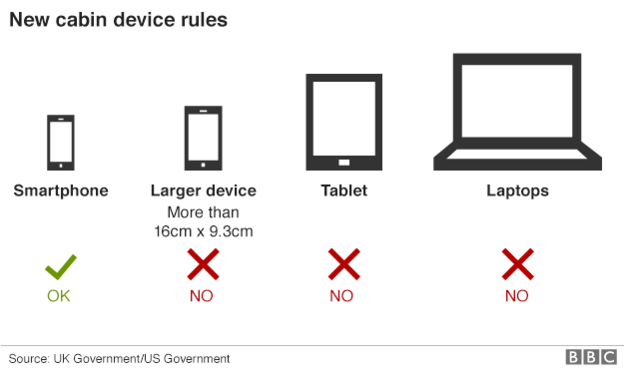 Any affected device, which also includes e-readers, will need to be placed into hold luggage and checked in before passengers go through airport security.

Number 10 said it was up to individual airlines to decide when to begin enforcing the ban and passengers should contact their airline for more information.

The ban does not apply to all airlines with services between the UK and the affected countries. The government listed 17 carriers that would be subject to the restrictions.

Which airlines are affected?

Transport Secretary Chris Grayling said: “We understand the frustration that these measures may cause and we are working with the aviation industry to minimise any impact.”

Air industry consultant John Strickland said the ban would cause “headaches for airlines and customers”, but carriers had “no choice but to put security first”.

While the US government cited unspecified “threats” in its announcement, the prime minister’s official spokesman declined to discuss whether the new rules were prompted by specific intelligence.

What are the new US rules?

Asked why the US ban differed from the UK, Theresa May’s spokesman said: “We have each taken our own decisions.”

This is a controversial decision, and, I’m told, not an easy one for the government.

The UK ban goes even further than the US move which does not affect national carriers.

It is not the result of a specific, identified terrorist plot, but of mounting concern in US and British intelligence circles at the ongoing interest amongst jihadist groups in the Middle East in blowing up a passenger plane in mid-air.

There are some in Whitehall who fear this may be an over-reaction, with damaging commercial and diplomatic consequences. But others have pointed to last year’s laptop bomb smuggled onto a flight from Somalia by insurgents from Al-Shabaab.

The year before, so-called Islamic State blew up a Russian passenger plane over the Sinai Peninsula. But that bomb was hidden in the hold, where laptops and other devices will still be allowed.

The editor of Aviation Security International, Philip Baum, told the BBC that “encouraging people to check laptops, and other such items, into the luggage hold simply makes the challenge of screening even harder”.

For more than two years, the official UK threat level for international terrorism has stood at severe, meaning an attack is “highly likely”.

In July 2014, passengers at UK airports were advised to ensure electronic devices were charged so they could be switched on for security checks.

The ban on liquids over 100ml in hand luggage – introduced after a foiled 2006 plot to blow up planes using explosives hidden in drink bottles – also remains in place.

The US has given airlines 96 hours, beginning at 07:00 GMT on Tuesday, to implement its ban, which officials said had no end date.

Passengers on some 50 flights a day from some of the busiest hubs in the Middle East, Turkey and North Africa will be affected.

The Turkish government has said the US ban is wrong and should be reversed.

But the Department of Homeland Security said extremists were seeking “innovative methods” to bring down jets.

In a statement, it said the US government was “concerned about terrorists’ ongoing interest in targeting commercial aviation, including transportation hubs over the past two years”.

Citing the Somalia incident in February 2016, as well as the 2015 downing of a Russian airline in Egypt and attacks at airports in Brussels and Istanbul, it added: “Evaluated intelligence indicates that terrorist groups continue to target commercial aviation, to include smuggling explosive devices in various consumer items.”

Which airports are affected by the US ban?

Previous: “International Day for the Elimination of Racial Discrimination”
Next: London Attack – opportunism at its worst 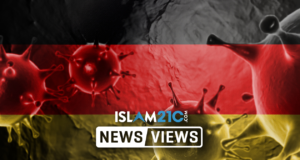 Coronavirus: European mosques call to prayer in solidarity during crisis