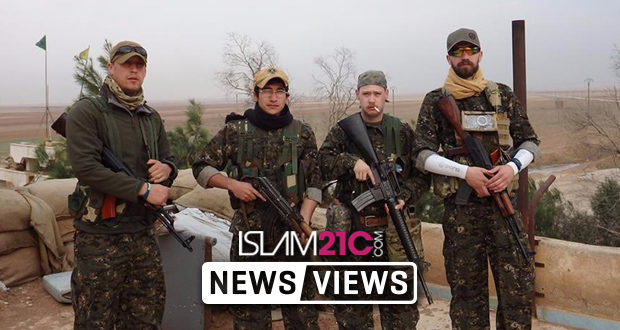 The BBC has reported that British men are amongst several international mercenaries that have left their homes and joined armed militants to fight Turkish forces in north-west Syria. [1] They have joined to battle Turkish forces that have launched an operation on the Kurdish-held enclave of Afrin.

On the 20th January, Turkey announced that it had launched its “Operation Olive Branch” in Syria’s Afrin region. Turkey deems this region a threat to its national security and aims to clear the region of YPG, PKK and Daesh (ISIS) militants. [2]

Amongst the mercenaries is a British fighter named Huang Lei, who is a 24-year-old from Manchester that left for Syria in 2015.  Lei expressed his reasons for traveling to Syria by telling the BBC that he had a “duty” to fight. He also mentioned that there were two other British nationals with him in his group. [1]

The YPG recently released a video in which it shows an international group of militants that have participated in battles in Syria. [1]

An American in the video states,

“We’re all ready to go and fight in Afrin, against the invading force of Turkey.

“We’ve been training for a significant amount of time. We are prepared, and we have been supplied by the YPG to fight against the Turkish terrorists.”

Lei was a student at the University of Manchester studying international politics before he left for Syria. He also stated,

“Defending Afrin is our duty,”

The militias have been accused of killing its opponents, ethnic cleansing and taking part in several atrocities. [4] Human rights organisation, Amnesty International accused the militants of committing war crimes against civilians in Syria. It claimed that militants had destroyed homes, villages and forced people to flee their land. [5]

As well as being responsible for the deaths of civilians, the militants have also attacked places of worship during its aggression against Turkey. The militants have killed worshipers and “destroyed hundreds of mosques”. [6]

Some have voiced concerns that those returning to the UK having fought alongside the YPG and PKK could pose a threat to the UK by importing some of the criminality shared by the PKK. This concern is not in vain, as PKK supporters — let alone militants — are known to have carried out violent activities against civilians, such as kidnapping tourists, [7] and carrying out suicide bombings to make political demands. [8]