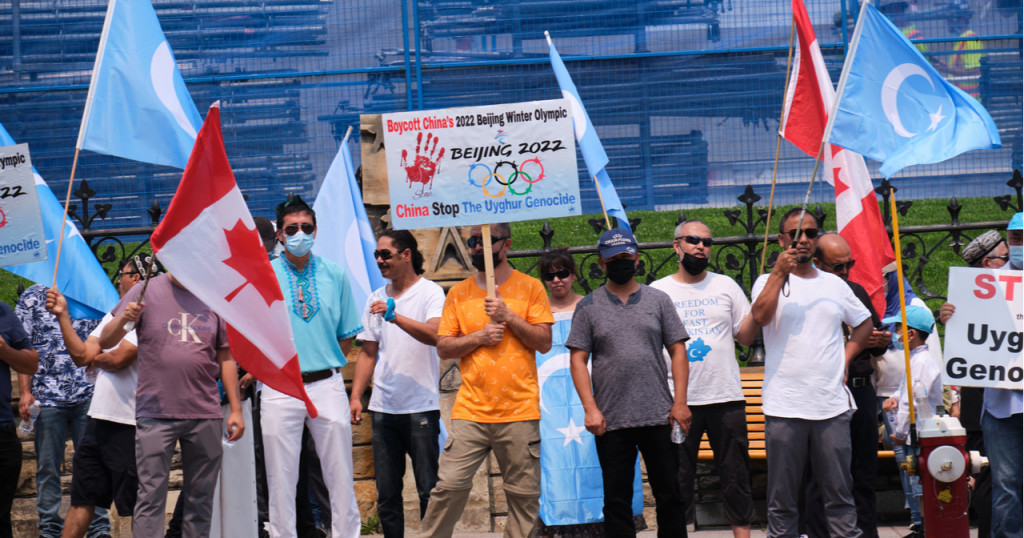 In the land where the original Olympic Games were held around 3,000 years ago, there were chaotic scenes in October 2021 when human rights campaigners successfully swooped into the historic town of Olympia with banners calling for “no genocide games”, whilst others carried the Tibetan flag. The iconic flame lighting ceremony saw the Olympic flame lit in order to usher in the period of the Beijing Winter Games in February 2022. However, on Saturday, it was announced that the “farcical” Greece trial of the protesters would be postponed. While a reason has not been given, it appears obvious that the move was in order to avoid leaving Olympic host China feeling red-faced. The country’s leadership continues to face accusations of genocide against the Uyghurs in addition to oppressive policies towards the Tibetans and Hong Kongers. [1] [2] [3]

On Thursday, three defendants were expected to attend trial in the town of Pyrgos, which is a mere eight-minute drive from Olympia – where the ancient Olympic Games were held every four years from the 8th century BC to the 4th century AD. [1] The demonstrators included a Tibetan-Canadian, a Briton, and an American; their fate is now unclear as human rights lawyers had travelled in from the UK and Athens in order to attend. Michael Polak, of the legal aid group Justice Abroad, who had travelled from London to support the defendants, said:

“Our pleas to the court for the case to be heard fell on deaf ears. They pushed it into the long grass so as not to have to deliver a decision before the Beijing Olympics.” [3]

“We made an express plea to bring the case forward, as it was towards the end of the listed hearings, but the bench strongly refused to do so. They could have prioritised the case, given its sensitivity and the seriousness of the accusations, but chose not to.” [3]

The postponement of a trial that would have been deeply embarrassing for the Chinese government is indicative of the financial stranglehold upon which China holds Greece. Plamen Tonchev, head of the Asia department at the Institute of International Economic Relations in Athens put it in the following words:

“Greek authorities, mostly for political reasons, are very reluctant to embarrass China. Indicative of this cautiousness is its consistent abstention from any statements – and there have been many since 2019 – that criticise China’s policies in Hong Kong and Xinjiang.” [3]

The Beijing hosting of the Winter Olympics is the second time that the Chinese capital city has held the Olympics. This follows the 2008 Summer Games that ran from 8 to 24 August of that year. While the 2008 Games were still controversial in their own right, the 2022 Winter Games have been choked with controversy. It is true that this time around, collectively the world is far more plugged in regarding human rights abuses in Xinjiang, in addition to Chinese aggression towards Tibetan independence plans as well as efforts to bolster Hong Kong’s democratic system of governance.

Indeed, the Chinese government appears fearful of Hong Kongers increasing their anti-Beijing demonstrations, even as the Beijing government has previously taken dramatic steps to allow the disqualification of “unpatriotic” members of parliament. In November 2020, the entirety of opposition lawmakers quit after four colleagues were disqualified from sitting in parliament. There have also been a number of cases involving pro-democracy campaigners being detained on the Chinese mainland, only to then disappear from sight. Some of these detainees have later reappeared in Chinese custody, while others remain missing. [4] [5]

London-based Free Tibet campaigner Jason Leith described his disappointment at the postponement of the Greek trial, adding, “The protest itself must have lasted less than a minute.” Leith further stated,

“Our aim was never to cause damage, and it is absurd to say that we did. All we had was a flag and a banner. We just wanted our voice to be heard in solidarity with all those oppressed by the Chinese Communist party.

“It was totally peaceful. We had hidden up in the hill above the ruins and when they saw us emerge, chanting, security forces pounced. I had the foot of a policeman on my back for about 15 minutes.” [3]

Moreover, as regards Tibet, the Beijing government has attempted to use the pretext of the elimination of “the three evils of separatism, terrorism, and religious extremism” in order to repress the region’s culture and religion. In fact, the rights abuses against the Tibetans precede that of the Uyghurs in recent years, with a 1985-88 study detailing forced sterilisations, abortions, and infanticide as extreme birth control measures in the region. [6] [7]

Aptly referred to as the “Games of shame”, around 500 protesters in the Swiss city of Lausanne marched outside the International Olympic Committee (IOC) headquarters on Thursday, which was a day prior to the opening ceremony of the Games. Led by an activist on skis who symbolically dragged the Chinese flag behind him, the demonstrators condemned Beijing’s role as host city for the games. The Tibetan artist Loten Namling who was granted political asylum by Switzerland two decades ago and has lived in the country for 32 years, led hundreds of activists with skis that had the word “freedom” painted on them. One activist made a poignant comparison to the Berlin Olympic Games of 1936, which were held under Nazi rule – “Don’t let Beijing 2022 become Berlin 1936”, said the placard. [8]

“The reason why I’m dragging the Chinese flag is China destroyed my country. China destroyed my culture. Let them realise how painful it is for us. Never, ever should they give the Olympics to mass murderers and dictators. It’s time to say stop.” [8]

The president of the Tibetan community in Switzerland, Karma Choekyi, was the organiser behind the Lausanne protest last Thursday. She described her anger at the IOC for turning a blind eye to the various human rights crises occurring in China. Said Choekyi,

“The Chinese communist regime is empowered and they feel this kind of Games legitimises their right to crack down on the human rights of the people under them. We condemn the IOC and the sponsors for making this happen.” [8]

In addition to Tibetan and Hong Kong campaigners, activists for the Uyghur cause have consistently been calling for the IOC to relocate the Beijing Games. The Labour politician and shadow foreign secretary David Lammy wrote in an opinion piece for the Guardian on Sunday,

“China should not have been given the honour of hosting this year’s Winter Olympics. When Beijing hosted the summer Games in 2008, the prevailing hope was that engagement with China would lead to greater openness. Such views now look naive. Instead, the opposite has happened: while China’s economy has boomed, the last decade has seen a concerted crackdown on human rights, a centralisation of political power and creeping and extensive surveillance, as athletes and officials are now discovering.” [9]

“This growing authoritarianism has reached new and sinister heights under President Xi Jinping, including the dismantling of Hong Kong’s democracy. Most horrific is the situation in Xinjiang, where there is extensive evidence of mass “re-education” camps, forced labour, forced sterilisation, and cultural repression on an industrial scale against the Uyghur people. The appalling treatment of the Uyghurs has led our parliament and others around the world to recognise that China’s actions amount to genocide.” [9]

However, despite the best efforts of activists around the globe, the sporting event is currently in full swing with a number of events having taken place, including the mixed relay, the women’s skiathlon, and the men’s 5000m long-distance event. Norway leads the way with most gold medals, while the Republic of China (Taiwan) leads the overall medal table. Whatever the end result of the event is, the Beijing Winter Games of 2022 will go down as one of the most blatant efforts at sportswashing in recent history, aided in a major way by sponsors ignoring the numerous ongoing human rights catastrophes while pocketing hefty profits. [10]