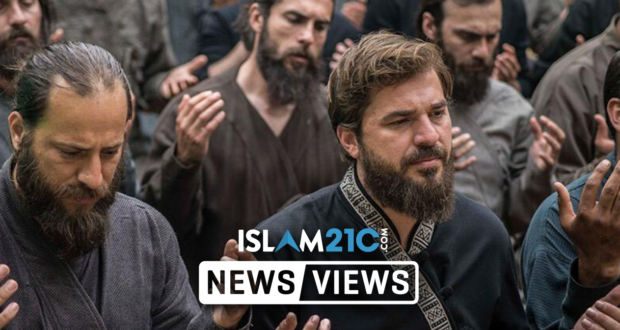 A Mexican couple were inspired to revert to Islam after watching the hit Turkish TV series ‘Resurrection: Ertugrul’. [1]

The couple, who reside in the United States, took their Shahada on Sunday after being motivated by the hit period drama and deciding to research Islam.

“We were affected by Turkish TV series ‘Resurrection: Ertuğrul’’ and Turkey’s humanitarian activities around the world, and then decided to be Muslim.” [2]

Celal Al, who plays Abdurrahman Alp in the show, was present at the 22nd annual meeting of the Muslim American Society (MAS). Al joined the couple in their uttering and repeating back of the declaration of faith.

Allahu Akbar! The #Mexican couple were inspired to look into #Islam after watching the famous #Ertugrul TV series. And here they are saying the shahada with the actor who played Abdur Rahman, an alp of Ertugrul.

Subhan’Allah. May Allah accept from him and keep them firm. pic.twitter.com/wXhdN9GamJ

After becoming Muslims, the couple were gifted two copies of the Qurʼān by Al, one in English and the other in Spanish.

“It is a great pleasure for us to see that people around the world are very interested in Turkey’s humanitarian activities. I am very happy to see an example of this in Los Angeles.’’ 2

Turkey is one of the top five series-exporting countries in the world, enthralling audiences from Latin America to Central Asia. More than 500 million viewers follow Turkish TV series in over 150 countries, according to Turkey’s Ministry of Culture.

What is Dirilis: Ertugrul?

‘Resurrection: Ertugrul’ remains one of the more successful Turkish TV exports in recent years, even after bidding farewell with its final episode earlier this year after 5 years on air.

The show is centred around the life of Ertugrul, the father of Osman I, the leader of the Ottoman Turks who would later be the founder of the dynasty that established and ruled the Ottoman Empire. The show focuses on the heroic story of Ertugrul and his warriors against a plethora of adversaries, from the Knights Templar to Mongol invaders. [3]

What sets apart ‘Resurrection: Ertugrul’ from other Turkish TV series is that the narrative is seen primarily through the lens of Islam, made more evident with its non-subtle manifestations of Islamic history and heritage spread throughout the scenes of the series.

Things like beginning things by uttering the Basmala, showing the main characters perform their prayers, recitations and references to the Qurʼān in daily matters, and telling the stories of the prophets as guidance and reassurance. In short, the series shows what life is like for an ordinary Muslim. [4]

Its popularity is not surprising for its millions of Muslim viewers seeing themselves in what they live. But what contributed to the series’ amazing global reception is the heroism of the characters, with the men and women truly being unapologetically Muslim, making us long for the days when Muslims were powerful and Islam was glorified, and not just a mere ‘technicality’.

So while the story has been documented in our history, and the show has been etched in our hearts, with children dressing up as characters from the series for World Book Day, and now non-Muslims taking their Shahadah as a result of it, we should all reflect on what the popularity of ‘Resurrection: Ertugrul’ really means.

2019-12-04
Hamza Saleem
Previous: Who should you vote for?
Next: Quranic Community #4 | The Importance of al-Ḥujurāt’s General Message