Are you ready for our first ever NATIONAL CAMPAIGN?
Home / News / Footage shows grieving dad brutally dragged away from bedside of dying daughter 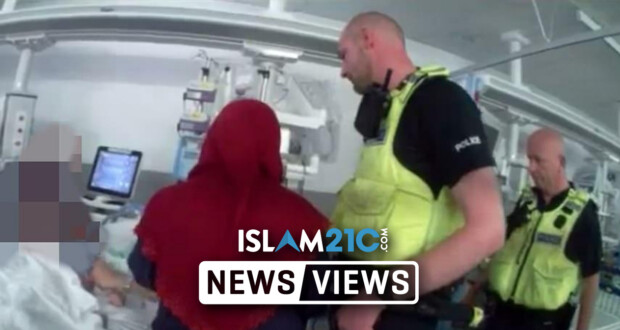 Shocking footage has emerged from last year of police officers dragging a grieving father from the bedside of his six-year-old daughter after he was informed that her life support would be withdrawn.[1]

The harrowing footage, which was recorded in the early evening of 18th August 2019, contains scenes that viewers may find upsetting. It can be viewed below:

The man in the film recorded from a police body camera has been identified as 59-year-old Dr Rashid Abbasi, along with his wife Dr Aliya Abbasi. The couple were subjected to police violence and verbal abuse in the presence of their dying daughter and one of her siblings.

Dr Rashid Abbasi specialises in respiratory medicine and has served the NHS for over 30 years. He and his wife were informed by doctors at the hospital in the North of England (whose name cannot be mentioned for legal reasons) that there was nothing more they could do for their daughter Zainab, and that she should be allowed to die.

Dr Rashid and Dr Aliya pleaded with doctors for further tests and for her to be treated with steroids, citing that their daughter’s condition had improved on two previous occasions. Dr Rashid believed that his daughter could survive with the right care, but the response from the hospital was that they were “not going to be doing any more going round in circles”.

“It’s a bit like if you take your car to a garage and a mechanic insists on a certain course of action. You go with the advice because you don’t know any better.”

“Because we were both doctors, we knew exactly what should be happening and we could point out when our daughter was being failed. If this could happen to us, what about other people?”

“On two previous occasions, in 2016 and 2018, Zainab was critically ill in intensive care and doctors suggested it was time to bring her off the ventilator and allow her to die. But because of our medical knowledge, we successfully challenged them and urged them to treat her with higher doses of steroids. On both occasions we were proved right.”

“This happens up and down the country every day because parents don’t know what is happening.”

Allegedly, Dr Rashid pushed a senior doctor who attempted to prevent him returning to his daughter’s bedside. No less than 30 minutes later, four police officers and two security guards arrived at the scene. Initially asking to be left alone to process the news of his daughter being withdrawn from life support, Dr Rashid was then wrenched away by an officer holding his neck. He was then arrested and unable to spend crucial moments with his critically ill daughter, who was suffering from respiratory problems and a rare uncurable genetic illness called Niemann-Pick disease.

Dr Rashid’s wife Dr Aliya was also seen being grasped from behind before falling to the floor, screaming at the officers to get their hands off her. At the beginning of the video, Dr Aliya can be heard asking, “Where is the compassion?” before desperately continuing to appeal for understanding from the officers, saying “We were just informed they were going to take the tube out of our daughter” followed by “Do you know what compassion is?” Her cries to the police at the scene about her husband’s chest pains could be heard while he was pinned down on the floor.

The parents were visibly not ‘disturbing the peace’ nor posing a safety threat at the time, and thus there were no grounds for them to be removed in the manner that they were.

Dr Rashid told reporters for the first time after reporting restrictions were lifted on Friday that the officers “behaved like barbarians” in the traumatic ordeal.

“The pictures speak for themselves. They behaved like barbarians.”

“They were not prepared to listen. My daughter was given a death sentence half an hour before they arrived.”

A distraught father was arrested on suspicion of breach of the peace and assaulting police officers, and he was dragged from his daughter’s bedside as he tried to convince doctors not to withdraw her life support machine. It was later discovered following the incident that Dr Rashid had suffered a heart attack, and the next day had underwent an emergency angioplasty.

The NHS Trust of the unnamed hospital applied to the High Court for permission to take Zainab off the ventilator, but she died on September 16, just three days before the hearing was due to start.

“She was the light of our home.”

“When she passed away it was like the soul had been taken from our house. All of us were here but the home was empty.”

Zainab’s death was undoubtedly overshadowed and made unbearably painful for her parents, who are both doctors, by the bitter dispute with medical staff over whether to withdraw life support and the treatment they faced from police officers that day.

The police force involved – who also cannot be named for legal reasons – said its officers responded to a call “of a man being violent and abusive towards staff and that he had assaulted a consultant”.

“While we recognised this was a very distressing time for him and his family, our duty was to ensure the safety of all those present.”

The image of the police has been heavily scrutinised in recent months, both at home and abroad, and has done little for the public to entrust their safety and protection in them. In relentless and inhumane fashion, it was clear that the police force on the day was not “following protocol”, because protocol would not warrant a female officer to shout, “you’re acting like an animal, it’s disgusting”.

Public opinion will now be divided as to whether she was calling out the behaviour of the man or if the man’s ethnicity played a part in her comments. Nevertheless, the film has only raised more doubts that some police officers cannot be trusted – only further dividing the disparity between police and citizens that atrocities around the world have bought to our attention.