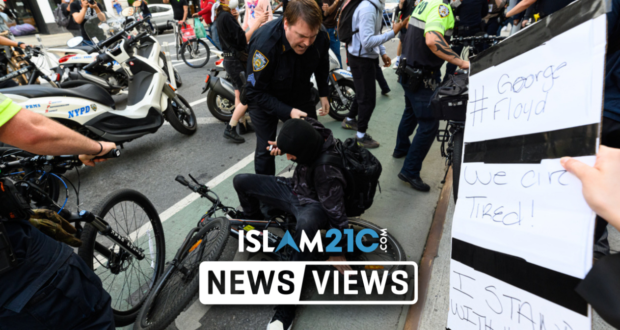 One of the four former police officers filmed arresting George Floyd, an unarmed black man in Minnesota, has finally been charged for murder.[1] The widely-shared footage of Monday’s incident clearly shows the now-dismissed police officers restraining Floyd, who is seen offering no resistance to arrest. One of the officers placed his knee firmly on the neck of Floyd for several minutes as he struggled to breathe, resulting in his eventual death.

Concerned bystanders were seen shouting at the officers and pointing out there was no need to pin Floyd down in that manner. Floyd himself is heard saying “I can’t breathe” before he became motionless.

The murder drew strong comparisons to the similar killing of Eric Garner in 2014, when police needlessly suffocated the unarmed black man to death as they held him down. Racist attacks and violence against the Black community in America have been constant, not least the gunning down of Ahmaud Arbery earlier this month whilst he was out jogging. Yet this particular incident of police brutality struck a particular nerve, with protests breaking out throughout the country.

The four officers involved in the killing of George Floyd were fired shortly afterwards, but the lack of accountability for their actions mobilised the masses, who called for their arrest, with protests continuing for a fourth day on Friday. The victim’s brother said:

At the time of writing, only one of the former officers, Derek Chauvin, has been arrested and charged. Investigations are ‘ongoing’ into the other officers.

The state of Minneapolis has seen frustrations boil over, with some protests turning violent. Minnesota Governor Tim Walz has declared a state of emergency and has called in the National Guard. Police have used tear gas and non-lethal projectiles to disperse crowds, angering local residents:

“The way the police – MPD – have been treating people, having been treating the community, have been treating young people is incredibly frustrating. Seeing all the sophisticated gear that they have is disgusting … [especially] for a city where we are continuing to talk about inequity and disparities … we continue to funnel money to the police.”

Earlier today, police arrested a CNN reporter during a live broadcast, despite him showing his press credentials and explaining live on air that he was a journalist. The journalist, Omar Jimenez, is seen being led away whilst his non-Black colleagues highlighted their different treatment. A White colleague told CNN, “I identified myself … they said, ‘OK, you’re permitted to be in the area.’ I was treated much differently than (Jimenez) was.”[6]

Governor Tim Walz was quick to apologise for the incident, although it did nothing but re-iterate the injustice faced by the Black community and the underlying racism within the system.

US President Donald Trump has also been widely criticised for his handling of the sensitive issue. Seemingly appealing to his to electoral base, or perhaps just being himself, he used harsh words for the protestors and threatened to send in the National Guard, tweeting, “…when the looting starts, the shooting starts.”[7] Twitter hid the post under grounds of glorifying violence, a move done after it faced pressure to delete some of Trump’s posts for the potential physical harm they might cause.

Several prominent voices have spoken out over the incident and the lack of strong action against the officers. American footballer Colin Kaepernick, who famously led the “Take A Knee” campaign against police brutality, tweeted:

When civility leads to death, revolting is the only logical reaction.

The cries for peace will rain down, and when they do, they will land on deaf ears, because your violence has brought this resistance.

We have the right to fight back!

Other similarly strongly-worded messages have been shared on social media.

“Until the killing of black men, black mothers' sons, becomes as important to the rest of the country as the killing of a white mother's son, we who believe in freedom cannot rest until this happens.”#blacklivesmatter #JusticeForGeorgeFloyd

What led to the murder of #GeorgeFloyd? Racism! pic.twitter.com/cHfy8OthHa

Arresting a police officer is just a start. When’s this insanity going to end? How many more black men, women, boys and girls will be callously killed?

Rest In Peace #georgefloyd #AuhmadArbery #BrionnaTaylor and so many more we will never know.