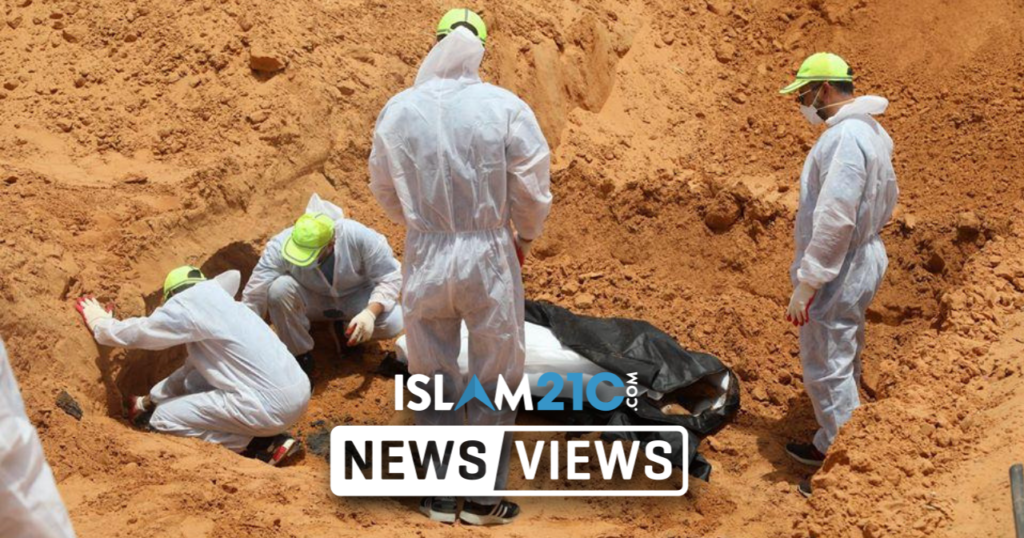 Eight mass graves have been found in an area liberated from militias loyal to general Khalifa Haftar, who has suffered heavy setbacks as the internationally recognised government of Libya regains control of key towns amid the recent capture of several Haftar strongholds. [1]

The United Nations Support Mission in Libya (UNSMIL) has expressed “horror” at the recent discovery of the mass graves in an area retaken only last week from Haftar, the ex-CIA asset and head of the so-called ‘Libyan National Army’ (LNA). [2]

Most of the graves were found in Tarhuna, according to the Tripoli-based GNA. The city of Tarhuna was Haftar’s last remaining stronghold in north-western Libya, which was captured by GNA forces last Friday. [3]

Tarhuna was a major supply base for Haftar’s militia and a launch pad for their attacks against Tripoli and other government-controlled areas. With this series of battlefield defeats, Tarhuna imposes a major defeat to Haftar, collapsing his 14-month offensive on the capital Tripoli.

“UNSMIL notes with horror reports on the discovery of at least eight mass graves in past days, the majority of them in Tarhuna.”

1/3 UNSMIL notes with horror reports on the discovery of at least eight mass graves in past days, the majority of them in Tarhuna. International law requires that the authorities conduct prompt, effective & transparent investigations into all alleged cases of unlawful deaths. pic.twitter.com/cQY7dTNhzI

According to Buravi Masud Muhammad Abu Zeyd, a deputy chief physician at a hospital in Tarhuna, “Nearly 160 bodies have been found in Tarhuna after being liberated by the Libyan army.” [4]

Soon after Tarhuna was liberated, Libyan authorities found 106 dead bodies in a hospital. According to the army’s Operation Burkan Al-Ghadab (Volcano of Rage), the victims had been brutally executed.

Most of the bodies showed signs of torture, according to Health Ministry spokesman Amin al-Hashemi. Haftar’s forces had also burned some prisoners in containers and buried tens of others alive in mass graves, the Libyan Interior Minister Fathi Bashagha revealed. Many others were thrown into a water well following execution carried out by Haftar’s militias.

This is not the first time Haftar has been accused of such crimes. The brutal military commander appears to be responsible for much of the chaos in the North African country and has allegedly instructed his soldiers to commit war crimes and atrocities.[5] Forces loyal to Haftar have carried out several cold-blooded killings and massacres of innocent civilians.[6]

Another report by HRW states:

“Libyan National Army (LNA) forces may have committed war crimes, including killing and beating civilians, and summarily executing and desecrating bodies of opposition fighters in the eastern city of Benghazi…”  [8]

The UN has also recently verified numerous summary executions at Tarhuna prison. In March, the UN expressed deep concern after receiving reports of hundreds of enforced disappearances, torture, killings, and displacement of entire families in Tarhuna by forces loyal to Haftar. [9]

The GNA’s Justice Ministry has formed a committee to investigate the discovery of the recent mass graves. UNSMIL has requested the committee “to promptly undertake the work aimed at securing the mass graves, identifying the victims, establishing causes of death & returning the bodies to next of kin”.

Haftar began a military assault in the Libyan capital Tripoli in early April last year in an attempt to capture the city from fighters loyal to Prime Minister Fayez al-Serraj’s GNA. [10]

The GNA has the backing of the UN and is internationally recognised, following the Libyan Political Agreement signed in 2015.  The GNA recently accepted an offer from Turkey for logistical and military support, which has been successfully resisting attacks and advancements to deter inhumane offensives led by forces loyal to Haftar. [11]