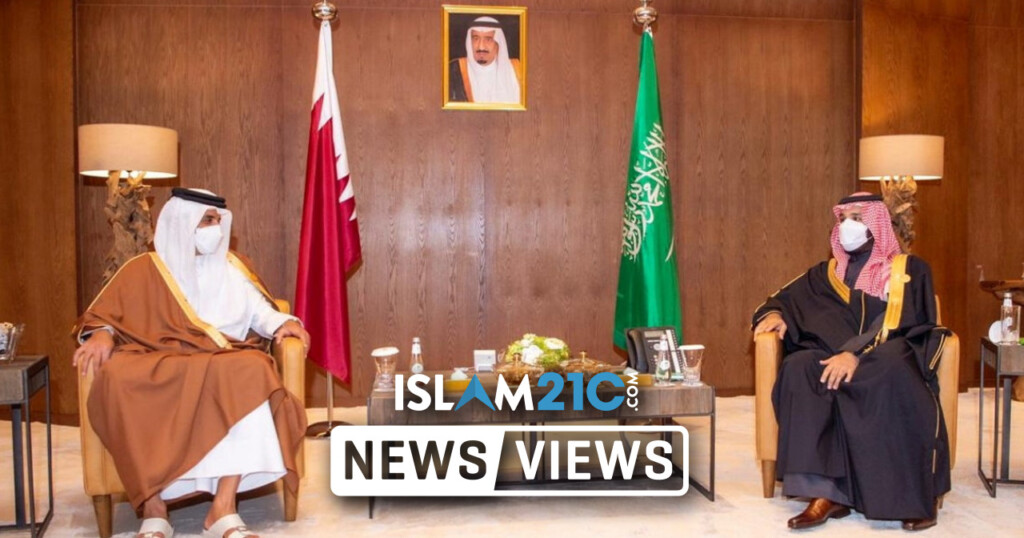 The two Gulf nations of Saudi Arabia and Qatar have reached what appears to be an amicable end to their three-year-long diplomatic spat that had paused all trade between the two countries in addition to air, sea, and land travel between the Arab neighbours.[1]

In a visit to Saudi Arabia on Tuesday, the Emir of Qatar, Sheikh Tamim bin Hamad al-Thani, was cordially greeted by the Crown Prince Mohammed bin Salman, whom some would argue is the de facto leader of the oil-rich nation.[2]

The two met airside and warmly embraced after al-Thani landed in the city of Al-Ula at around noon.

The news comes at a critical point as US president-elect Joe Biden gears up to be inaugurated as the 46th President of the United States later this month, looking to then build a tougher stance towards Saudi Arabia.

Biden, 76, has openly called out Saudi Arabia for human rights abuses, and has released a strongly-worded statement concerning the slain journalist Jamal Khashoggi, whom many believe was killed by assassins working for Mohammed bin Salman.

“Two years ago, Saudi operatives, reportedly acting at the direction of Saudi Crown Prince Mohammed bin Salman, murdered and dismembered Saudi dissident, journalist, and U.S. resident Jamal Khashoggi. His offense — for which he paid with his life — was criticizing the policies of his government. Today, I join many brave Saudi women and men, activists, journalists, and the international community in mourning Khashoggi’s death and echoing his call for people everywhere to exercise their universal rights in freedom.”[3]

The incumbent President Donald Trump, on the other hand, has been flattering and unwavering in his approach towards Mohammed bin Salman and the Saudis. Trump has consistently maintained a strong rapport in the aim of keeping regional rival Iran at bay.

Saudi Arabia was the first foreign trip for Trump in 2017, and this closeness has only grown over the years, including leaving the 2015 Iran nuclear agreement that Trump’s predecessor, Barack Obama, had spent years developing and garnering support for from the permanent members of the UN Security Council and the European Union.[4]

Even when news broke of the Saudi journalist Jamal Khashoggi having allegedly been murdered by hitmen on the orders of Mohammed bin Salman, Trump maintained his backing for the young but powerful Crown Prince, to the ire of many Republicans in Congress.

“From the start of his presidency, Trump cultivated Saudi Arabia and placed the kingdom at the heart of his Middle East policy, backing its stance against Iran and encouraging its purchase of U.S.-made weapons.”

“The president praised a Saudi crackdown on hundreds of top businessmen, officials and members of the royal family at the Ritz-Carlton hotel in Riyadh in November 2017. He stood by Saudi Arabia, even as the CIA concluded that the powerful crown prince ordered the brutal killing of Saudi journalist Jamal Khashoggi, a Washington Post columnist, in Istanbul in October 2018.” [4]

This week, Sheikh Tamim bin Hamad al-Thani is attending the Gulf Cooperation Council (GCC) summit at the behest of King Salman. A thawing in relations between Qatar and Saudi Arabia could have significant ramifications for the prospect of peace between Iran, ‘Israel’, and the Gulf nations.

Until now, Saudi Arabia and Qatar have sat on either side of the fence, with the former vehemently opposing Iran whilst the latter continually improving relations with the same.

The ball is now in Biden’s court as he enters the White House later this month, making clear his intent to pursue a harder line against Saudi Arabia and reshape the political landscape in the Middle East.