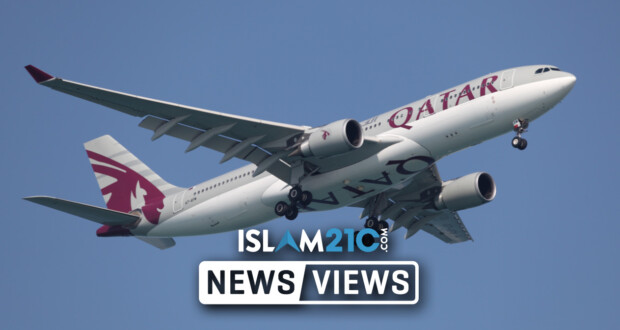 For the first time in over three years, a Qatar Airways flight has departed from the city of Doha and landed in Riyadh around an hour later.[1]

It has been over three years since Saudi Arabia, the UAE, Egypt, and Bahrain levied a diplomatic blackout on Qatar for allegedly being too friendly with Iran and supporting “terrorism” in the region and afar by aiding the Muslim Brotherhood.

The Qatar Airways flight took off from Doha at around 11:00 GMT and landed in Riyadh at approximately 12:00 GMT, covering the roughly 370 miles distance between the capital cities of the two Gulf nations.

#QatarAirways announces the resumption of flights to the Kingdom of Saudi Arabia. The first flight will be QR1164 from Doha to Riyadh today, 11 January at 13:45 local time, operated by an Airbus A350-1000 aircraft. https://t.co/9uNzE0LxO9

“Not only is this seen as a positive move following the reconciliation declaration that was signed in Al-Ula last week between Qatar and the former blockading countries, the resumption of flights between destinations is something that is extremely welcomed.”[2]

The highly symbolic flight marks the resumption of diplomatic relations between the quintuplet of Arab nations at a time when the American presidency is transiting to the Democrat Joe Biden and incoming vice president Kamala Harris.

“Passengers from KSA can once again enjoy the award-winning Qsuite, featuring sliding privacy doors and the option to use a ‘Do Not Disturb (DND)’ indicator. The Qsuite seat layout is a 1-2-1 configuration, providing passengers with one of the most spacious, fully private, comfortable, and socially distanced products in the sky.”[4]

Following the resumption of flights between #Riyadh and #Doha, the first @Saudi_Airlines arrived at @HIAQatar this evening. #SAUDI pic.twitter.com/ai3vAUl2nd

It will be interesting to observe whether Qatar will change its long-standing brotherly stance towards Iran and Turkey, two of the key sticking points that ultimately led to the mid-2017 embargo by the UAE, Saudi Arabia, Bahrain, and Egypt.

Qatar appears to have come through this neighbourly dispute relatively unscathed and unaffected as it does not seem to have implemented any of the demands originally set out by the aforementioned states.

The blockade of Qatar only made the state more resilient as it sought aid from its partners Turkey and Iran. The Independent reports that at one stage during the dispute, thousands of cows were flown in by Qatar Airways for the country to produce its own milk.[5]

Saudi Arabia, of course, has its own strategic reasons for wanting to bring Qatar back into its diplomatic orbit: pushing a tougher stance against regional rival Iran at a time when the incoming US President Joe Biden takes office in just over a week’s time.

2021-01-12
Shaheer Choudhury
Previous: Israel rejects vaccine request from WHO for Palestinians
Next: WhatsApp Contains Pornography – do your children have it?