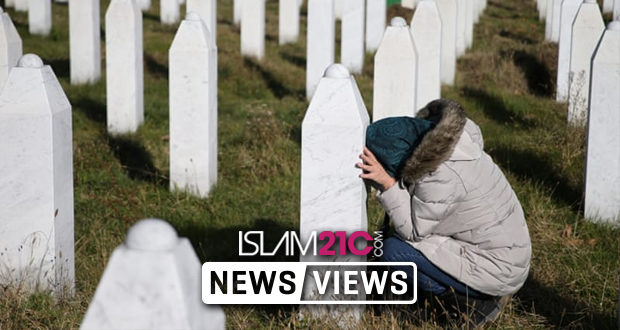 Former Bosnian Serb military general, Ratko Mladic has been found guilty of multiple counts of genocide, crimes against humanity and war crimes and has been sentenced to life in prison following a verdict today at The Hague. The United Nations’ war crimes tribunal convicted the “Butcher of Bosnia” of 11 counts committed from 1992 to 1995.

Mladic was found responsible for atrocious crimes during Bosnia’s devastating 1992-95 war: the deadly three-year siege of the Bosnian capital, Sarajevo, and the harrowing massacre of more than 8,000 Muslims between the ages of 7 and 70 at Srebrenica, Bosnia, at the hands of Serbia’s military.

“The crimes committed rank among the most heinous known to humankind, and include genocide and extermination as a crime against humanity.”

“Mladic presided over some of the darkest crimes to occur in Europe since World War II, bringing terror, death and destruction to thousands of victims, and sorrow, tragedy and trauma to countless more,” he said. “His conviction is a testament to the courage and determination of those victims and witnesses who never gave up hope that they would see him brought to justice.”

One of his two genocide counts includes ordering the siege of Sarajevo, in which his troops surrounded the city for 46 months and carried out a campaign of sniping and shelling at the civilian population “aimed to spread terror amongst them”.

Mladic was also accused of exiling Bosnian Muslim and Bosnian Croat inhabitants from Bosnia to establish a Greater Serbia and of taking UN peacekeepers hostage. The conviction of the Butcher of Bosnia offers the family of victims a small taste of justice after over 100,000 people were killed and millions more lost their homes during the Bosnian war, while as many as 50,000 women were raped.

Mladic, of course, denied the charges and displayed arrogance and hostility throughout his trial.

“At the start of his trial six years ago, Mladic made eye contact with Munira Subasic, a woman who lost 22 relatives to Bosnian Serb forces in Srebrenica and made a throat-slitting gesture as she watched on from the public gallery.”[1]

Once the judge delivered his verdict, Mladic “the Butcher” stood in an angry outburst. He was reprimanded by the judge and removed from the courtroom.[2] For all his arrogance, evil and smug self-entitlement, Ratko Mladic will spend the rest of his life in jail. As Allāh (subḥānahu wa taʿālā) tell us,

“And if Allāh were to impose blame on the people for what they have earned, He would not leave upon the earth any creature. But He defers them for a specified term. And when their time comes, then indeed Allāh has ever been, of His servants, Seeing.”[3]

And they resented them not except because they believed in Allah , the Exalted in Might, the Praiseworthy, to whom belongs the dominion of the heavens and the earth. And Allah , over all things, is Witness.

Indeed, those who have believed and done righteous deeds will have gardens beneath which rivers flow. That is the great attainment.
Indeed, the vengeance of your Lord is severe.[4]

Previous: Time: The Ever-Diminishing Capital
Next: The Reckoning