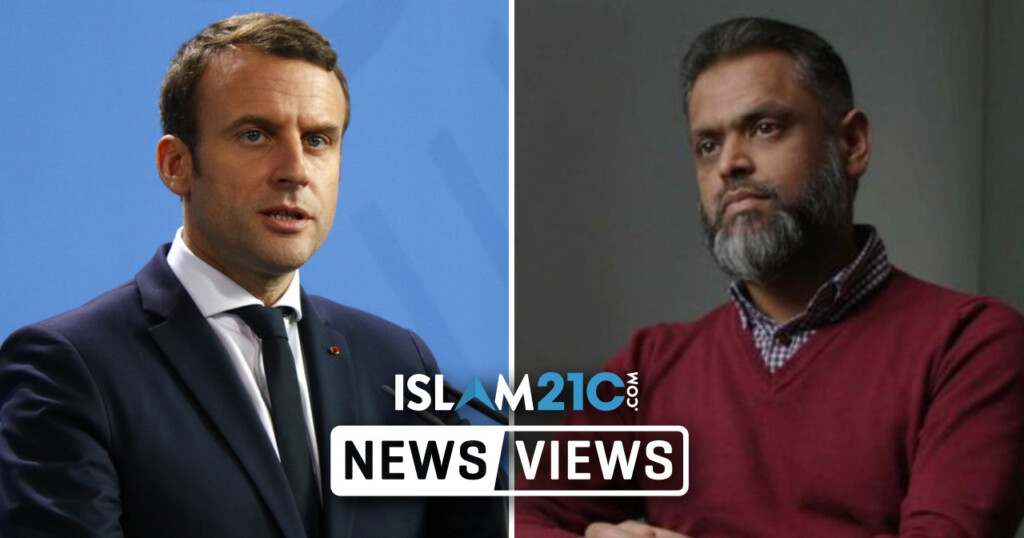 A frenzied attack reportedly carried out against two French Algerian women by two women of “European” appearance is not being described by the police and media as an act of terrorism. In fact, it’s barely being reported at all.

Several demonstrations all over France were held following the killing of school teacher Samuel Paty, who was attacked and beheaded last Friday by the Chechen teen Abdoulakh Anzorov. Before being shot by police, Anzorov reportedly uploaded a video and admitted to the killing.

Anzorov’s motive was that Paty had shown Muslim students derogatory and highly offensive images of the Prophet Muhammad (sall Allāhu ‘alayhi wa sallam) in order to promote the idea of ‘freedom of expression’. Some Muslim parents took to campaigning against Paty and accused him of Islamophobia.

The French President Emanuel Macron swiftly condemned the attack on Paty and called it an “Islamist terrorist attack”, even though Anzorov had not been known to French security services. Speaking from the scene of the crime, Macron promised, “They won’t win… We will act.”

Pinning the blame on an entire community

Without explicitly explaining who “they” were, Macron had already made his views clear before the attack when he unveiled a long-anticipated plan at the start of October to tackle “Islamist radicalism”. Macron began by asserting that “Islam is a religion that is in crisis all over the world today; we are not just seeing this in our country.”[1]

Now, there is no doubt that many Muslim nations are in a state of crisis; existentially, in some cases. It may be fair to say that some who profess to live within the purview of Islam act outside of its tenets. Yet to say that “Islam is in crisis” is to place the blame for one, or even all, terrorist attacks on the shoulders of an entire way of life and its followers.

There are two obvious problems with this. Firstly, it is untrue: EU statistics show that Muslims account for a small fraction of terrorism in Europe. Secondly, lies on Islam and Muslims and claiming “Islam is in crisis” are constantly peddled by the far right as fact.

This is a global effort. The leader of communist China uses the same argument to justify putting three million Uighur Muslims in concentration camps and force them to renounce Islam. The leader of capitalist USA claims that “Islam hates us” – whatever that means.[2]

Islam in France: an introspection

Macron’s awaited response to the attacks against the two Muslim women under the Eiffel Tower should begin with an honest look in the mirror. This might start with a concession that France has a deep-rooted and historic connection with eugenicist racism, so much so that France celebrated the decapitation of Algerian fighters who resisted their occupation,[3] keeping their heads as trophies in a Paris museum only to return them earlier this year in July.

A humbler and more courageous move might have been for Macron to remind the nation about the context of France’s own violence. Half of his country collaborated with and welcomed the Nazis during World War II.[4] Colonialist attitudes continue to plague France’s collective memory and inspire the far right and Muslim-haters to stab women in front of their children while calling them “dirty Arabs”.

Had Macron done this, his views might finally show some true leadership and gain some traction.

Perhaps following the devastating explosions in Beirut, Macron might admit that France continues to wallow in delusions of colonial grandeur by throwing its support behind Lebanon but making it conditional on accepting French ‘advice’ on political reform.

Then there are France’s numerous military incursions in the Sahel, Mali, Iraq, and Syria – lands where the majority of people are Muslim.[5]

But Macron will not say anything on any of this. All this speaks of a deep crisis within France and how it sees itself on the world stage.

State violence against Muslims will only degrade France further

History and foreign policy aside, there are even more pronounced problems with France’s domestic policies.

A day before Anzorov’s attack, French police raided the home of Idriss Sihamedi, the head of one of the largest Muslim charities in France, BarakaCity, and beat him in front of his wife and children.[6] Sihamedi led a campaign against the new laws planned by Macron that seek to rid Islam in France from “separatism” and “foreign influences”.

Sihamedi was insulted, beaten, handcuffed, and arrested in his own home by armed officers while his wife and children were forced to keep their hands in the air. He was released without charge the following day, but following the Paris attack, he was informed by police officers in the middle of the night that the government had begun proceedings seeking to shut down BarakaCity.[7]

Sihamedi’s voice is one that challenges the pronounced Islamophobia and racism of the French government from a place of confidence and strength. This, however, openly challenges the narrative of those who wish to blame Muslims and migrants for everything.

Surprisingly for some, France has been a breeding ground for the far right since France’s dalliance with Hitler during World War II, despite its principles of “equality, fraternity and liberty”.

Until recently, the far-right National Front (FN) enjoyed up to 25% of the vote during general elections. In more recent years, FN leaders failed against Macron’s dynamism, but it is their fear of North African Muslims and darker-skinned migrants that permeates French society.[8]

One particular group, Generation Identity (GI),[9] is a movement that began in France with the explicit anti-Muslim aim of “stopping the Islamification of Europe”. Their tactics involve threats and intimidation against Muslims. In 2012, the group stormed and occupied a new mosque in the western city of Poitiers.[10]

The fear-based ideology of GI has spread throughout Europe, and it is one of a multitude of far-right groups that enjoy growing support in Europe, and France in particular.

And yet, in the battle of ideas, the mainstream media favours the intellectually-defeated Muslim that tries to assimilate.

Sadly, even this position is not good enough and is still rejected by the far right. In a 2015 ‘debate’ between a Muslim woman and a GI member recorded by the BBC,[11] the GI member states: “If Muslims were not living in France, we would never have terrorism.”

This public faux pas aside, there is a strong and growing cohort of confident, articulate, and unapologetic Muslims prepared to challenge the far right and those within the French government who adopt their arguments. It is those voices that must be heard in equal measure, and they must be protected.

A reasonable argument and the weight of intellectuality is needed at this time more than ever. This is the force that will surely counter the bullies on the far right and make actions such as Macron’s aim to close down scores of Muslim-led institutions seem to be exactly what they are: fuel for the far right and a beckoning towards the worst to come.

There are reportedly stickers plastered all around French cities that claim “Islam is worse than Nazism”.[12] For a nation whose majority actually welcomed the Nazis, this is hardly an insult – it is simply more evidence of France’s ongoing split identity, its unwillingness to look honestly in the mirror of history and the present, and a deep fear that shows that, if anything, its crisis is with itself.